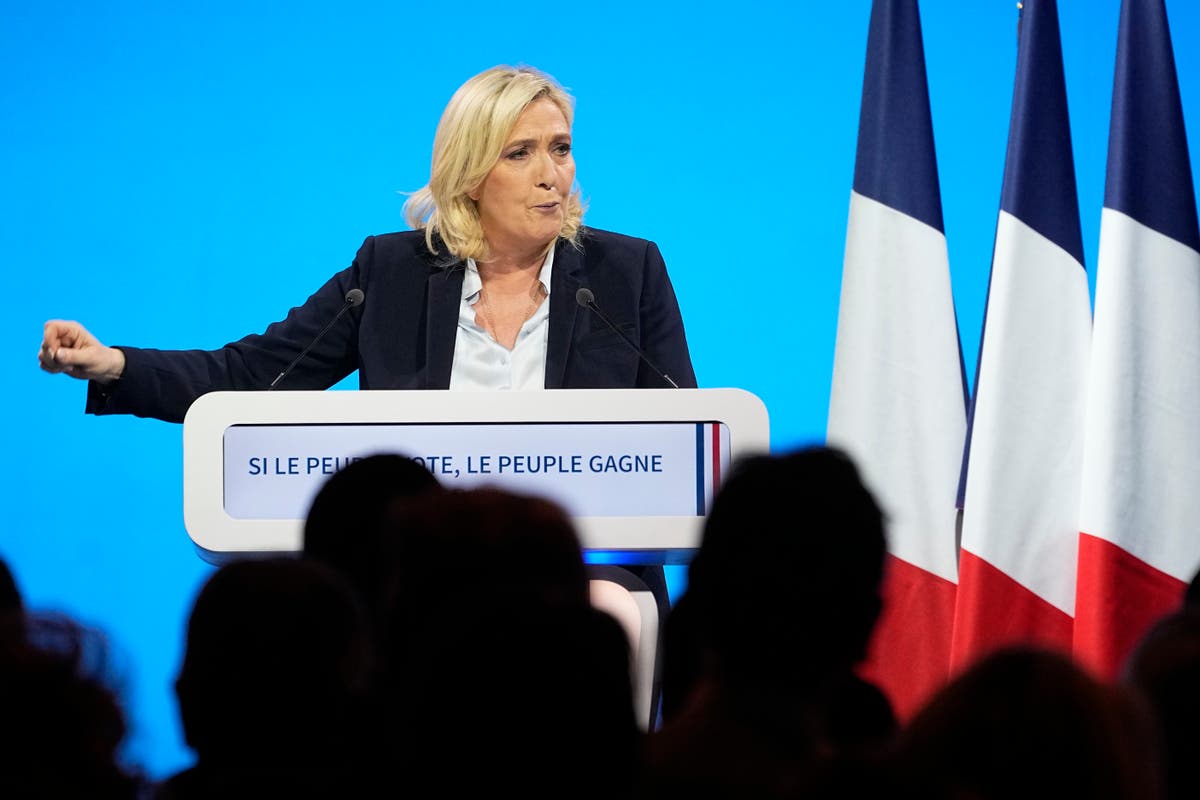 Marine Le Pen, leader of the far-right French political party National Rally, is seeking to secure a major upset on Sunday when she goes up against president Emmanuel Macron in a runoff vote in the hope of denying him a second term in the Elysee Palace.

Ms Le Pen secured 23.1 per cent of the vote in the first round of the French elections on 10 April, coming second behind Mr Macron who gained 27.8 per cent as ten other candidates were eliminated.

However, it is thought the electorate could be tempted to back the radical change she represents this weekend, having grown frustrated with the present administration’s pro-business, pro-Europe stance with the country mired in a cost of living crisis driven by inflation.

Mr Macron defeated Ms Le Pen five years ago, in part thanks to her poor performance on the national debate stage, when she lost her composure, muddled her notes and came across as ill-prepared.

In the present race, Ms Le Pen gave a better showing in Wednesday’s face-off but not well enough in the opinion of responders to the broadcaster’s snap poll to indicate she can secure a majority at the ballot box.

Many French voters may be swayed by Ms Le Pen’s efforts to detoxify her party’s brand over the last 11 years, which has seen her try to channel its appeal towards those struggling economically who feel abandoned by the state.

Others will remain unconvinced by the makeover and feel unable to stomach the prospect of voting for Ms Le Pen in view of her hardline anti-immigration politics and past statements of admiration for war-mongering Russian president Vladimir Putin, which has already given her cause to tear up leaflets featuring his photo in the present campaign and to reiterate her support for Ukraine.

The girls were raised in Montretout, a 19th century mansion on a hill overlooking the Seine that was gifted to him by a cement magnate supporter and which family biographer Olivier Beaumont has likened to the Bates Motel from Alfred Hitchcock’s Psycho (1960).

On 1 November 1976, when Ms Le Pen was just eight years old, another home, the family’s Paris apartment, was bombed by her father’s enemies, with the inhabitants lucky to escape without injury as the entire front of the building was blown open.

A neighbour’s baby reportedly fell five floors, only to be caught up in the branches of a tree and miraculously saved from harm.

The bomber was never identified and the incident caused Ms Le Pen to be shunned by classmates at the Lycee Florent Schmitt in Saint-Cloud where she was studying, many of whom considered her “dangerous” to know, adding hurt to the trauma of the incident itself, which she describes vividly in her autobiography, recalling shivering and holding her sisters’ hands, praying for deliverance.

She also writes of the pain of her parents’ separation in that memoir, Against the Waves (2005), her mother Pierrette walking out on Jean-Marie when their youngest daughter was 16, complaining he was the devil incarnate.

Ms Le Pen went on to study law at Pantheon-Assas University, graduating with a master’s degree in law in 1991 and an advanced degree in criminal law a year later, after which she registered with the Paris bar association and worked as a lawyer until 1998.

It was at this point that she joined the legal department of the NF and her career in far-right politics commenced.

She was elected as a regional councillor of Nord-Pas-de-Calais in 1998 and served until 2004, before winning the same office in Ile-de-France, in Nord-Pas-de-Calais again in 2010 and in Hauts-de-France in 2015, completing six-year terms in each case.

Ms Le Pen was also a member of the European Parliament between 2004 and 2017, a municipal councillor of Henin-Beaumont between 2008 and 2011 and succeeded her father as leader of the NF in 2011, securing two-thirds of the vote and seeing off a challenge from Bruno Gollinsch.

Mr Le Pen had founded the party in 1972 and been its only leader for almost four decades, although the closest he ever came to power was finishing second to Jacques Chirac in 2002, when he secured a paltry 17.8 per cent of the vote to 82.2 per cent.

His daughter hoped to make the party electable, starting the process of moderating the worst of its racist, xenophobic and homophobic policies and duly coming third behind Francois Hollande and Nicolas Sarkozy in 2012, securing 18 per cent of the vote and outdoing her father’s personal best in the process.

That rebranding or “dediabolisation” (de-demonisation) finally caused her to suspend and then expel her own father in 2015 after he repeated comments he had first made in September 1987 downplaying the Holocaust, a decision that caused a lasting rift between them, exacerbated when one of his dogs killed her beloved cat Artemis, an estrangement that Mr Beaumont has likened to a Greek tragedy.

Despite her renaming the party and attempting to shift it towards more conventional conservative politics, support for Ms Le Pen has unquestionably been driven, at least in part, by anti-Muslim sentiment in France in response to the Isis-inspired jihadist terror attacks of recent years.

And, like her father, she herself is guilty of invoking the Second World War to conjure prejudice, notoriously comparing Muslims praying in French streets in 2010 to the country’s occupation by Nazi Germany.

Ms Le Pen has been married twice: to business executive Franck Chauffroy between 1995 and 2000, with whom she has three children named Jehanne, Louis, and Mathilde; and to ex-NF general secretary Eric Lorio between 2002 and 2006.

She was also in a long-term relationship with another party secretary and former NF vice president, Louis Aliot, between 2009 and 2019, who, interestingly, has Algerian Jewish heritage.

Ms Le Pen has previously joked about abandoning politics altogether to open a cattery but as her niece, fellow politician Marion Marechal Le Pen, has observed: “If you are called Le Pen, eventually politics will come and catch you. With a name like that, there is nothing else you can do!”