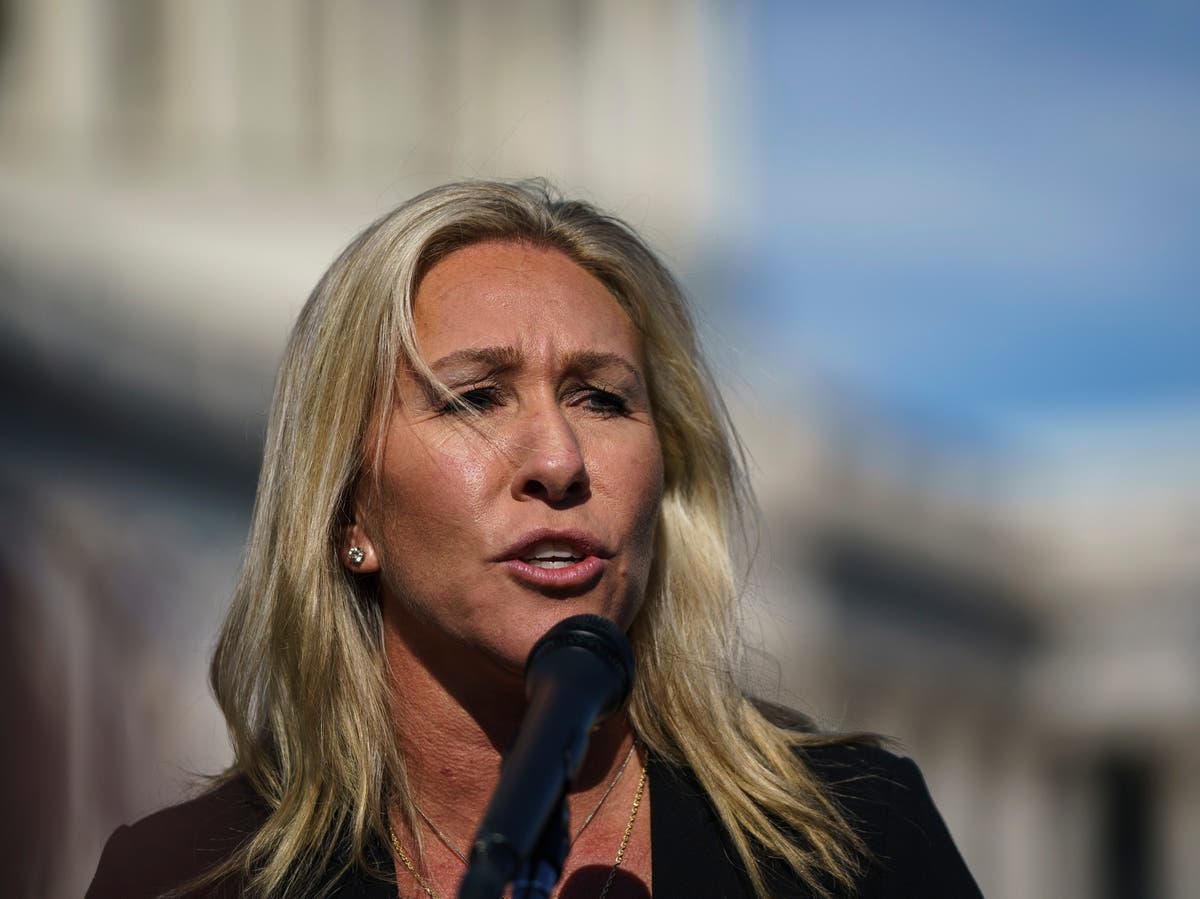 Ms Greene — who once bolstered conspiracy theories that the Parkland shooting was a false flag operation — has a long history of targeting Mr Hogg for his advocacy, often invoking her own experience during a 1990 hostage situation to back her support for loose gun regulations.

Ms Greene recently wrote a tweet claiming that as “someone who has also been on lockdown as a student when the only madman with a gun is another student who wants to kill people,” Mr Hogg should be open to discussing “common sense” solutions with her.

She also accused him of bullying her “weak RINO colleagues.”

Mr Hogg fired back, telling her he would not help her go viral by talking with her about gun laws.

When Ms Greene cites her own experiences, she is referring to a 1990 situation in which a gunman entered South Forsyth County High School and took two classrooms of students hostages. While Ms Greene was in the building, she was not among the students who were taken hostage, according to a school communications director.

She has frequently invoked that experience when arguing against “gun-free zones” in schools.

“There was no adult there with a gun in our school because our schools had turned into gun-free zones,” she said during an interview with Fox News’ Tucker Carlson. “This is because of Joe Biden and the crime bill that they passed back in 1990.”

Since then she has focused on Mr Hogg, even following him around with a camera and harassing him about his advocacy.

“David, why are you supporting red-flag laws that attack our Second Amendment rights?” she asked while live-streaming herself following him.

According to reports from the Atlanta Journal Constitution at the time, the culprit of the 1990 incident took 40 students hostage. The 17-year-old faced 90 felony counts of kidnapping and and aggravated assault. In 1991, the individual was sentenced to eight years in prison after pleading guilty.

The paper reported that the 17-year-old held nine students hostage for five hours and claimed they did not want to hurt anyone, but was trying to die at the hands of the police.

Ms Greene invoked the memory to explain her position on gun control.

“I truly believe that children at school should never be left unprotected. I believe they should be just as protected as we were with 30,000 National Guardsmen,” she said, likely referencing the influx of military personnel to the Capitol in the wake of the Capitol riot. “Our children are our future and they’re our most precious resource.”

Ms Greene has also cited her legitimate past trauma when undermining the trauam of her political opponents, as she once did with Representative Alexandria Ocasio-Cortez following the Capitol riot.

“I was in the chamber, unlike AOC, Representative Ocasio-Cortez, that faked her outrage with another hoax, just another hoax that gets shared everywhere,” The Hill reported Ms Greene said at the time, downplaying the Democrat’s trauma.

The Independent has reached out to Ms Greene for comment.

At the time, Ms Ocasio-Cortez had livestreamed herself on Instagram and recounted her experiences during the Capitol insurrection, saying she was fearful that she might die.

Conservatives – Republican Congresswoman Nancy Mace in particular – latched onto Ms Ocasio-Cortez’s account of the event to claim that she was lying and playing up the drama of the event to garner sympathy and demonise some Republican lawmakers who are considered by some as complicit in the attack.

Ms Mace misrepresented Ms Ocasio-Cortez’s story by claiming that her office is “two doors down” from hers and that “no insurrectionists stormed our hallway”.

In response, Ms Ocasio-Cortez claimed Ms Mace was trying to undermine her experience for Fox News “clicks,” and cited the congresswoman’s tweets from the day of the event to prove she was scared as well.

“Just evacuated my office in Cannon due to a nearby threat. Now we’re seeing protesters assaulting Capitol Police,” Ms Mace tweeted the day of the insurrection. “This is wrong. This is not who we are. I’m heartbroken for our nation today.”

Ms Mace was among the Republicans who supported Ms Greene when the House voted to strip her of her committee seats.