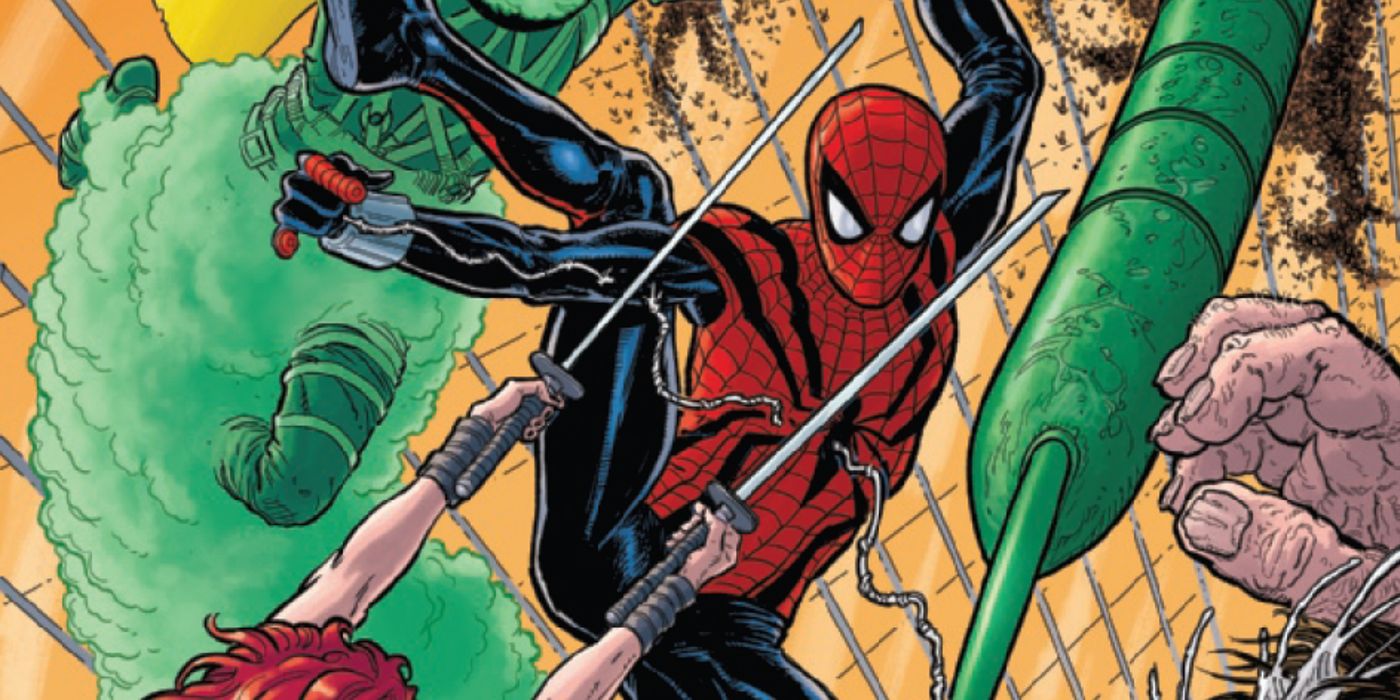 Being Spider-Man is never easy no matter who is behind the mask, but Ben Reilly has consistently had things worse than almost any of his similarly powered counterparts. In fact, Ben has just come face-to-face with another long tortured clone of Peter Parker. Unfortunately, the ensuing battle between Ben and Spidercide was only ever going to end in tragedy, though not without both of them becoming a bit better than their former selves in the process. Not only that, but Spidercide may have even set himself up for a new lease on life at the expense of the one he already had.

Ben Reilly: Spider-Man #5 (by J.M. DeMatteis, David Baldeon, Israel Silva, and VC’s Joe Caramagna) finds the titular hero amid absolute chaos after the superpowered inmates were freed from Ravencroft by the maniacal Spidercide. Despite Ben’s best efforts to save himself from the ensuing onslaught, he is quickly overwhelmed by the sheer number of threats. On the verge of being torn to shreds by the crowd, Spidercide finds within him one last, all-important sliver of humanity. Not only does he stop the disaster he has unleashed, but he also takes it upon himself to use his incredible powers to heal Ben’s wounds. Unfortunately, doing so costs Spidercide his life. Or rather, that is how things appear, though it is all but certain that this won’t be the end of his story by far.

When Spidercide was first seen in the pages of 1995’s Amazing Spider-Man #399 (by J.M. DeMatteis and Mark Bagley), he was little more than just another one of the Jackal’s many clones of Peter Parker. Only a few short months later, however, Spidercide got to show off just how different he was during a confrontation with the New Warriors. His complete control over his molecular structure has very nearly seen him gain the upper hand in almost every battle he has fought. Coupled with his ever-evolving nature, the only question left regarding his current fate is how much of himself he left behind in saving Ben’s life.

If he were to return once again, it wouldn’t be the first time that Spidercide has come back from the dead, though it could be the first time he has done so possibly on his own accord. Assuming he is bound to emerge from within Ben Reilly at some point in the future, the implications of that for both of them could very well be life-changing. Spidercide being given the opportunity to become a hero is something he had never really considered, yet after his recent breakthrough, it is obvious that the potential is there. Beyond that, the emerging humanity within Spidercide could also be just what Ben needs to bring himself back from the brink of darkness.

After the disastrous defeat of Beyond Corporation, Ben effectively gave up his life in a moment of utter despair, only to arise from the rubble as the malicious and menacing Chasm. So far, all signs point toward Ben’s recent descent into villainy being far more dangerous than he ever was when he took the mantle of Jackal, or even while bonded to Carnage. Without the pieces of himself that have shaped him into an abject hero, there is nothing stopping Chasm from becoming the Marvel Universe’s next great threat. Nothing except for Spidercide, that is.

Despite his best efforts to play the role of the villain, Spidercide was still imbued with the same innate goodness that has driven nearly every single Spider-Man clone towards the same heroic end. It may have taken him longer than the others to realize it, but Spidercide ultimately giving into his humanity is a clear sign that he could rekindle the same spirit in Ben. If he is still alive inside Ben somewhere, Chasm may not be nearly as powerful as he thinks. Or rather, not as permanent if nothing else.