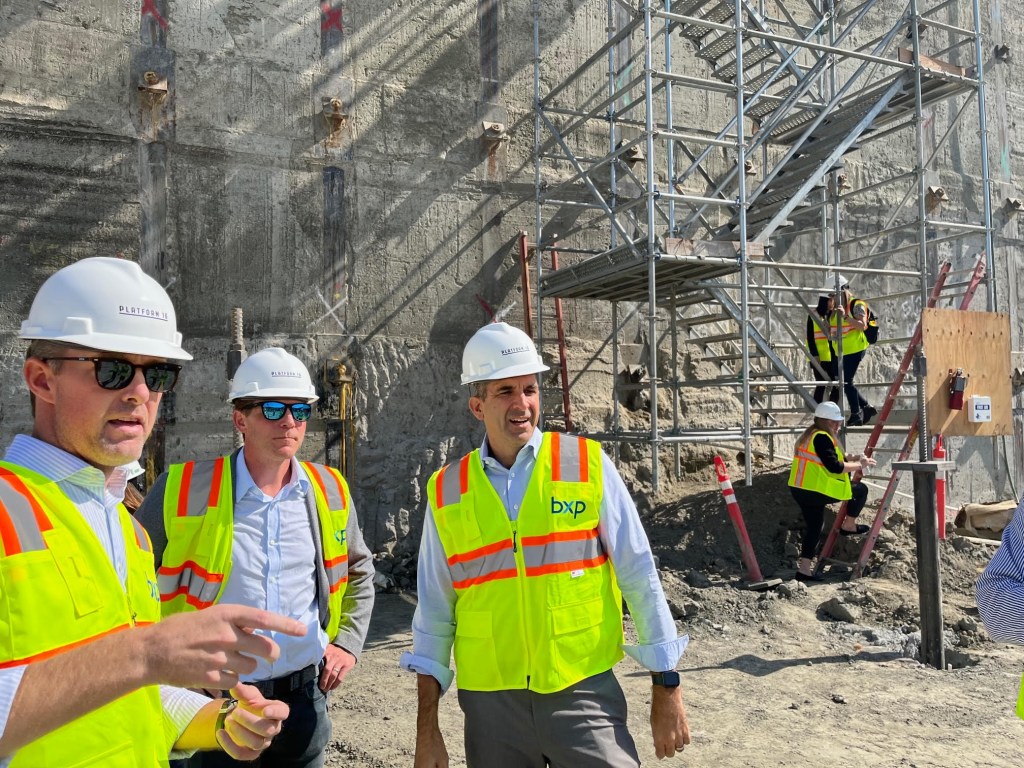 The Platform 16 office complex, which is expected to be an eye-catching office hub near the Diridon train station, is a very visible major bet that’s being placed on downtown San Jose by a development alliance of Boston Properties — which is switching to the corporate name BXP — and the Canada Pension Plan Investment Board.

“This is huge. This demonstrates the confidence of sophisticated builders who are making very big investments in the future of our city,” San Jose Mayor Sam Liccardo said in an interview with this news organization after touring the construction site of the Platform 16 tech campus.

Devcon Construction, the general contractor for the million-square-foot Platform 16 complex, is busy installing the vast foundation on the site, a months-long process that is expected to be complete in December.

Once complete, Platform 16 would total 1.1 million square feet and consist of three office buildings and a garage on a site bounded by Autumn Parkway, West Julian Street, North Autumn Street, and a railroad line.

The development would feature 16 terraces and would sprout a short distance from the footprint of Google’s proposed Downtown West neighborhood.

The current first phase of the development is slated to produce a modern office building totaling 390,000 square feet. The building is due to be completed sometime during the first three months of 2025. A below-grade parking garage is also part of phase one. Work on the garage should begin this December.

Platform 16 is arriving during a time of plenty of uncertainties over how quickly employees would return to their office workspaces in the wake of the coronavirus.

Despite these challenges, Boston Properties believes several factors are in Platform 16’s favor. These include the robust nature of the San Jose market along with Silicon Valley’s dynamics.

Plus, corporate executives are convinced that their employees work better in an in-person setting rather than through conference calls, in the view of Aaron Fenton, BXP’s senior vice president, development.

“Working from home, employees are not as productive,” Fenton said. “We hear from major business leaders across the country that they believe working in the office fosters collaboration and efficiency of work.”

BXP is also convinced that Platform 16 is the type of office product that could entice big tech players.

“We believe office projects can be successful as long as you have a great location with a premiere workplace,” Fenton said. “Platform 16 offers that.”

CBRE commercial real estate brokers Sherman Chan, Mark Schmidt, Mike Charters and Will Schmidt are marketing the tech campus and scouting for tenants on behalf of the property owners.

“We are meeting an unmet demand,” Fenton said. “We think our project is one of several catalysts that can all activate the west side of downtown san Jose. We along with Google’s Downtown West will have a major positive impact.”

The Platform 16 development is generating an average of 150 construction jobs every day, BXP executives estimate. Once work begins on structures such as the garage and the office building, that number is expected to double.

“There are hundreds of construction jobs and once we pull out of this period, the project can lead to thousands of jobs,” Mayor Liccardo said.

“There are plenty of doubters and plenty of reasons to doubt downtown San Jose,” Liccardo said. “The smart money, in the long run, is being placed on the downtown’s future.”