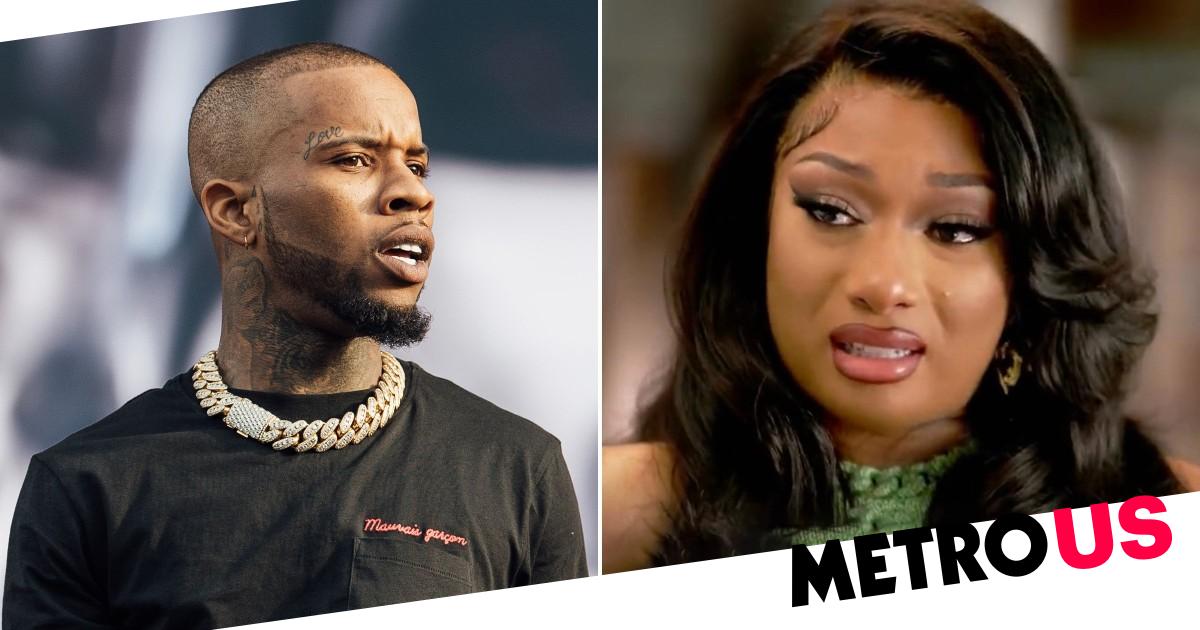 Megan Thee Stallion has opened up about the time Tory Lanez allegedly shot her in summer 2020.

The WAP rapper, 27, became tearful as she described feeling ‘so scared’ when the events unfolded.

Megan first made claims that Lanez shot at her in August 2020, one month after she was rushed to hospital for being shot in both feet.

The shooting occurred as she left a party in LA, and she later required surgery to remove the bullets.

Lanez was arrested for carrying a concealed weapon in an SUV, but later pleaded not guilty to an assault charge related to the alleged shooting.

Megan has spoken about the incident previously, taking to Instagram shortly after some intense speculation on what exactly went down, claiming that The Take rapper was behind the attack.

Now, the Hot Girl Summer hitmaker has spoken with Gayle King for CBS Mornings, with a preview of the interview showing the emotional star give her version of what happened.

‘There was an argument in the car?’ asked the host.

‘It was an argument because I was ready to go and everybody else wasn’t ready to go. But that’s, like, normal friend stuff,’ Megan began.

‘Like, we fuss about silly stuff all the time. But I never put my hands on anybody. I never raised my voice too loud. Like, this was one of them times where it was, like, it shouldn’t have got this crazy.’

Describing the events of the night, she said: ‘I get out of the car and it’s like everything happens so fast. And all I hear is this man screaming. And he said, “Dance, b***h”, and he started shooting. And I’m just like, “Oh, my God.” Like, he shot a couple of times. And I was so scared.’

The rapper was then asked if the shooter was firing from inside the car and whereabouts he was aiming.

Megan explained that he was ‘standing up over the window, shooting.

She added: ‘I was really scared ’cause I had never been shot at before.’

Earlier this month, Lanez appeared in court where he was handcuffed after a judge ruled that he had violated the protective order in his case with Megan by talking about her on social media.

It was reported by TMZ that during his hearing on April 5 in Los Angeles, the rapper was once again placed into custody of the Sheriff’s Department. His bail was increased to $350,000 (£273k).

The judge ruled that a tweet posted by Lanez, violated the order when he wrote: ‘Good d*** had me f***ing 2 best friends … and I got caught … that’s what I apologised for … it’s sick how u Spun it tho … [sic]’

Concerns were also raised surrounding a tweet by DJ Akademiks, which read: ‘BREAKING: It was revealed in court few moments ago that Tory Lanez DNA WAS NOT found on the weapon in the Meg Thee Stallion case.’

While they believed the tweet came from within Lanez’s team, his attorney Shawn Holley clarified that this wasn’t possible, since the information in the tweet was incorrect.

Lanez’s DNA wasn’t on a magazine, but a sample from the gun was inconclusive.

His trial is set to begin on September 14 with Lanez previously pleading not guilty to all charges.