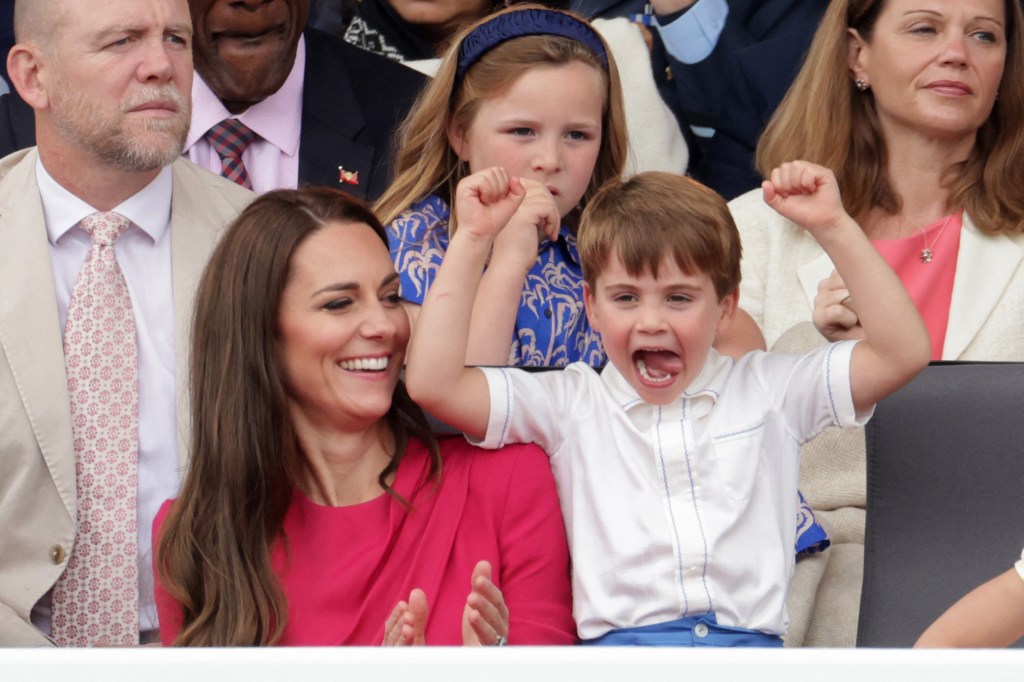 Online fans of Meghan Markle used widely disseminated images of 4-year-old Prince Louis, thumbing his nose at his mother, Kate Middleton, and otherwise getting rambunctious at Sunday’s pageant for the Queen’s Platinum Jubilee, to speculate on how the U.K. media would have ripped into Meghan if cameras caught similar images of her 3-year-old son, Archie, acting up at a public event.

American broadcast journalist Soledad O’Brien similarly tweeted: “Imagine all the royal press and racist headlines had this been Meghan and little Archie.”

(Imagine all the royal press and racist headlines had this been Meghan and little Archie) https://t.co/Sz5RsiUcOG

While Meghan’s fans correctly said that the biracial, U.S.-born duchess has endured harsh, sometimes racist treatment in the U.K. press, royal family fans hit back at people’s Louis critiques by saying that children should generally be off limits when it comes to criticizing the parents.

The royal supporters also decried how anyone would use images of a young boy, getting squirmy in public as young children often to do, to draw any public conclusions about the boy’s temperament or how his parents, Prince William and the Duchess or Cambridge, are raising him. They also thought it was inappropriate to use this situation to rehash his  his parents’ ongoing conflict with the Sussexes or to address larger questions about media coverage of the different sets of royals.

“People picking on Prince Louis for being an energetic toddler need a hard look at themselves,” tweeted a self-described royal enthusiast. “No he doesn’t need sorting out or isn’t spoilt just for being a CHILD. He’s full of energy and has been in the same place for hours, is he meant to be a statue?”

No he doesn’t need sorting out or isn’t spoilt just for being a CHILD. He’s full of energy and has been in the same place for hours, is he meant to be a statue?#PlatinumJubileePageant pic.twitter.com/RmL4v8ilA0

Others posted images of Louis sweetly cuddling up with his mother, father and grandfather, Prince Charles, at the same event to show that he wasn’t entirely out of control. They also blasted one royal reporter, who wrote the sympathetic biography of the Duke and Duchess of Sussex, for posting a since-deleted tweet about Louis acting up.

This debate comes as Meghan and Prince Harry jetted back to California Sunday after their highly anticipated and hotly contested appearance at two events marking the queen’s 70 years on the throne. It was the first time the couple had been seen together in public in the U.K. since their acrimonious departure from royal life in 2020.

The Sussexes brought their son, Archie, and daughter, Lilibet, 1, with them to the U.K. but the couple mostly kept out of sight during their four-day visit, apparently heeding requests that they not allow their global fame or conflicts with the royal family to overshadow the queen’s Jubilee celebrations.

The Sussexes definitely kept their children out of view of any cameras, unlike William and Kate. As future king and queen, they presumably have no choice but to occasionally have their children — George, Charlotte and Louis — appear in public, events that almost always subject the children to global scrutiny.

Harry and Meghan reportedly introduced Lilibet to the queen on Thursday and hosted a private birthday party for her on Saturday with some other young royal cousins — though not George, Charlotte and Louis — at their former U.K. home, Frogmore Cottage.

During the Sussexes’ visit, they were navigating a difficult path and were bound to be criticized no matter what course they took. Their low profile in fact ended up being used against them, offering evidence to some commentators about how they’ve become “second-row royals” or had to put up with an “ice-cold jubilee.”

The Daily Beast reported that the Sussexes have become “so desperately unpopular in Britain” that they were subject to audible boos, amid cheers, when they arrived at St. Paul’s Cathedral. Much also was made of how family arrivals and seating was arranged at St. Paul’s so that Harry and Meghan wouldn’t be in any physical proximity to William and Kate, or even to Harry’s father, Charles.

The couple faced further criticism for being “churlish” when they and their children flew out of the U.K. around lunchtime Sunday — before the big jubilee pageant kicked off in central London, the Daily Beast also said. The timing of their departure was seen as potentially overshadowing the queen’s final Platinum Jubilee appearance Sunday on the balcony at Buckingham Palace with Charles and William.

Given that the Sussexes were in flight across the Atlantic during the pageant, they no doubt missed the first photos and videos of their rambunctious young nephew being circulated online. Many headlines and social media posts were fairly kind to Louis and his parents, and talked about how he “stole the show” with his cute, “meme-worthy” childlike antics. Similar things were said about Louis on Thursday after he made funny faces on the balcony at Buckingham Palace, next to his great-grandmother, for Trooping the Color.

Images of Louis thumbing his nose at Kate, covering her mouth and pulling someone else’s hair, as his mother tried to calm him down, also prompted headlines about the little boy being “distracted” or even “throwing a tantrum.” Sussex defenders tried to make their point about biased media coverage, describing how Harry and Meghan have been unfairly hit with brutal comments about how they parent their children when it’s Kate and William who should being doing a better job.

The future king of England needs some serious time out. Come on, Kate, teach the kid some manners. https://t.co/DX64C7joT0

Louis is a child behaving as small children sometimes do when they are frustrated, tired, or bored. But it’s hard to imagine the British media showing such magnanimity if that had been Archie instead.

Some mentioned the many U.K. tabloid headlines that criticized Meghan for often being photographed in 2019 cradling her belly when pregnant with Archie. Some also shared the headline of one story that mean-spiritedly speculated that Meghan and Harry would raise Archie to be a “spoiled brat.”

Defenders of Louis and his parents made “He’s 4” a trending topic on Twitter Monday. They ripped into journalists or anyone on social media who were making too much of an issue of Louis’ behavior.

Amazing how few people on twitter seem to have spent time with an energetic 4 year old boy before.