Mendocino shipwrecks, lighthouses and the ultimate fish and chips 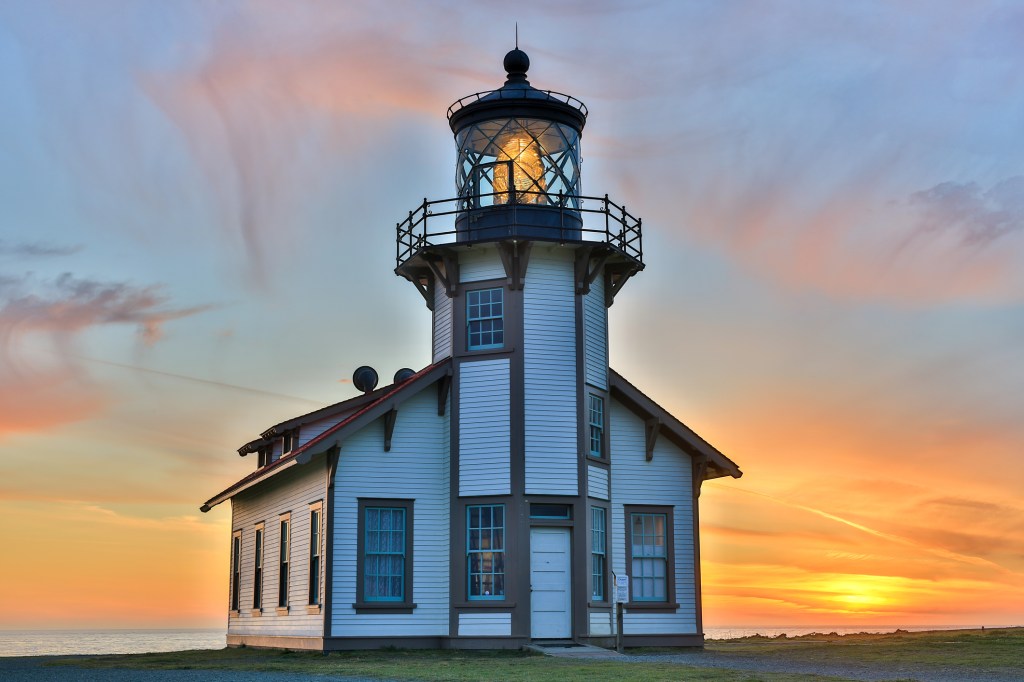 It might not have sounded like a romantic weekend, what with the crashing waves, plentiful shipwrecks and talk of doghole ports. Saying that historic lumber delivery systems sound like sheer insanity is probably not helping my cause, either. Would it help to tell you about the pretty lighthouses and waterside fish and chips?

A recent weekend found us history lovers ambling up to Mendocino, drawn by the allure of those sun-dappled waves, fresh seafood and maritime history. The village has long been a charming seaside destination, one that combines spectacular ocean views with fun restaurants and tempting little shops.

But Mendocino’s post-Gold Rush history began with a spectacular shipwreck. The Frolic, a Baltimore-built brig laden with Chinese porcelain, silks and, some believe, opium, was bound from China to San Francisco in 1850, when it foundered off Point Cabrillo. A search party was sent to retrieve anything salvageable. What they found back then was a treasure beyond compare: forests of old-growth redwoods.

By 1852, Mendocino was a logging encampment. Within a year, the Redwood Lumber Manufacturing Company had erected a sawmill there and soon after, ships were plying the waters off the Mendocino and Sonoma coasts to haul lumber from dozens of coastal camps and logging operations to San Francisco, Asia, Australia and the Eastern U.S. And the way the timber got from mill to ship was truly jaw dropping.

We were fascinated by the tales and the lingo — a doghole port? And a maritime history foray fit in nicely with our hopes of scoring some stellar seafood, preferably at a waterfront shack. So we meandered along Highway 1 one recent sunny afternoon, stopping first at the Point Arena lighthouse, which looks like a smokestack, probably because a smokestack company rebuilt it after the 1906 earthquake.

The lighthouses that dot the Northern California coastline are here precisely because of the logging operations. Of the nearly 200 shipwrecks along the Mendocino and Sonoma coast during this period, “lumber schooners” accounted for the majority, according to James Delgado, director of the maritime heritage program in the office of National Marine Sanctuaries at NOAA.

There were so many shipwrecks at Point Arena alone, the federal government commissioned a lighthouse for that point in 1866. A light station opened in 1909 at Point Cabrillo, where the debris from the Frolic litters the ocean floor to this day.

Today, you can not only visit those lighthouses and wander the grounds and museums, you can even book an overnight stay in one of the lighthouse keepers’ historic homes. No Fresnel-lens polishing duty required. There’s no shortage of places to stay, though. Mendocino is known for its historic inns and bed-and-breakfasts, including the Glendeven Inn & Lodge and the Brewery Gulch Inn.

As the sun set, we took a break from our lighthouse explorations to seek out sustenance in Fort Bragg, where the Noyo River flows to the sea. Its sheltered harbor, one of the few along this stretch of coast, is home to commercial fishing vessels — and to the Noyo Fish Company. This casual waterfront eatery offers some of the freshest, crispiest fish and chips ($16) we’ve ever had, as well as chowder ($7/cup) and local craft beer.

Man cannot live by lighthouses alone, so we spent the next day strolling the streets of Mendocino itself, popping into shops, from the charming Gallery Bookshop and Bookwinkle’s Children’s Books to Mendocino Jams and Preserves. Olallieberry jam is the top seller there with good reason, and the housemade mustard packs a wallop.

A few years ago, the venerable Cafe Beaujolais turned its bakery — The Brickery — into a pizza spot serving up blistered, wood-fired, Neapolitan-style pizza with toppings inspired by the season. So we ordered at the window, then grabbed a seat in the lush garden to enjoy wine, craft beer and a pizza ($16) topped with housemade fennel sausage, red onions and pickled Fresno chiles. (The spinach pesto, snap peas and chèvre number was awfully tempting, too.)

We’d visited Mendocino’s Out of This World, purveyor of telescopes and wonderful science toys, in the before times and convinced ourselves that we did not actually need a pair of binoculars. Except we really, really did. So this time, we dashed inside, whipped out a credit card and were soon admiring the horizon, the headlands and everything in between, including — could it be? Was that odd object part of the wire chutes used in doghole ports?

You knew we’d come back to that, didn’t you? Back in the 1850s, there were few roads and no rail line. Point Arena didn’t get a wharf until 1866. The Skunk Train didn’t arrive until 1885. So someone came up with the idea of anchoring schooners in the unpredictable swells of teeny, tiny, rocky coves — coves “so small and exposed that mariners joked they were barely large enough for a dog to turn around,” maritime archaeologist Deborah Marx noted in a NOAA document, hence the name doghole port. And they rigged up chutes — first made of wood, then wire — to basically shoot logs from the towering bluffs to a ship waiting below.

We kept thinking that the rigging could not possibly be as horrifying as that description implied. Through our new binoculars (we’re calling them a Father’s Day prezzie), we could see vestiges of those long-gone works on the headlands, where lumber was lowered to schooners below.

So we nipped into the Mendocino Headlands State Park visitors center and museum, which holds all kinds of interesting artifacts, including tools used by 19th-century loggers, ship memorabilia and an enormous diorama of Mendocino, circa 1890, when water towers dotted the village even more so than now and lumber operations filled what is now the state park’s lawns and picnic area.

A scale model shows exactly what that lumber delivery system looked like — so much more terrifying than anything we’d conjured — and historic photos showed that they delivered passengers to the ship deck that way, too. Incredibly, they were not screaming.

Hours later, sitting in the twinkle-lit fairy gardens of Luna Trattoria over our seafood, we were still talking about it. Clearly, those Gold Rush-era Mendocino-ites were much braver than we are.

Point Arena Lighthouse: This historic lighthouse has reopened for in-person tours ($5 per person), which run every 30 minutes daily at 45500 Lighthouse Road in Point Arena, and free virtual tours at www.pointarenalighthouse.com.

Point Cabrillo Light: The lighthouse is open from 11 a.m. to 4 p.m. daily at 13800 Point Cabrillo Drive in Mendocino; https://pointcabrillo.org.

Gallery Bookshop and Bookwinkle’s: Open daily from 10:30 a.m. to 6 p.m. at Main and Kasten streets in Mendocino; www.gallerybookshop.com.

The Brickery: Open from 11:30 a.m. to 3 p.m. Wednesday-Thursday and until 5 p.m. Thursday-Sunday at 961 Ukiah St. in Mendocino; www.cafebeaujolais.com/the-brickery.

For more Bay Area travel coverage
follow us on Flipboard.

The Perfect Winter Break Is On Canouan Island