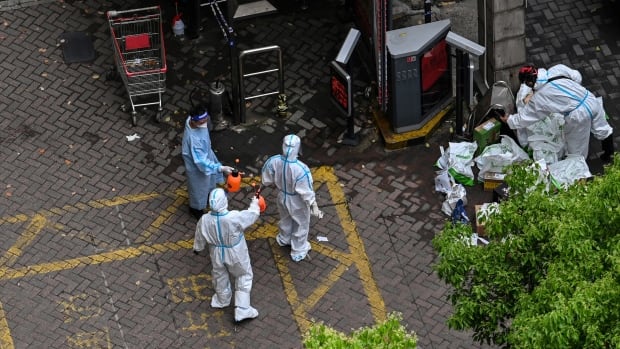 Volunteers and government workers in Shanghai erected metal barriers in multiple districts to block off small streets and entrances to apartment complexes, as China hardens its strict “zero-COVID” approach in its largest city despite growing complaints from residents.

In the city’s financial district, Pudong, the barriers — thin metal sheets or mesh fences — were put up in several neighbourhoods under a local government directive, according to Caixin, a Chinese business media outlet. Buildings where cases have been found sealed up their main entrances, with a small opening for pandemic prevention workers to pass through.

In Beijing, authorities announced a mass testing starting Monday of Chaoyang district, home to more than three million people in the Chinese capital.

A fresh outbreak has infected at least 41 people, including 26 in Chaoyang district, state broadcaster CGTN reported.

China reported 21,796 new community transmitted COVID-19 infections on Sunday, with the vast majority being asymptomatic cases in Shanghai. Across the country, many cities and provinces have enforced some version of a lockdown in an attempt to slow the spread of the virus.

The latest outbreak, driven by the highly contagious Omicron variant, has spread nationwide, but has been particularly large in Shanghai. The city, a financial hub with 25 million residents, has counted hundreds of thousands of cases but fewer than 100 deaths since the outbreak began nearly two months ago.

An Associated Press examination of the death toll found that despite a history of narrow criteria for linking deaths to particular diseases, especially COVID-19, authorities have changed how they count positive cases, leading to wiggle room in how they arrive at a final death count. The result is almost certainly an undercount of the true death toll.

On social media, people posted videos of the new barriers being put up Saturday, with some expressing anger over the measures. The barriers are meant to leave main roads unblocked, Caixin reported.

In one video, verified by the AP, residents leaving a building in Shanghai’s Xuhui district broke down the mesh fence barricade at their front entrance and went looking for the security guard they believed to be responsible for putting it up.

Shanghai is using a tiered system in which neighbourhoods are divided into three categories based on the risk of transmission. Those in the first category face the strictest COVID-19 controls and were the main target of the new heightened measures. In the third category, some buildings allow people to leave their homes and visit public areas.

In Shanghai, authorities reported 39 new COVID-19 deaths, raising the official death toll to 4,725 as of the end of Saturday, the National Health Commission said Sunday.

The city’s lockdown has drawn global attention for its strict approach and sometimes dangerous consequences. Many residents in the city have had difficulties getting groceries, resorting to bartering and bulk buying. Others have been unable get adequate medical attention in time, owing to the strict controls on movement.

WATCH | How Canadians locked down in Shanghai are coping:

How Canadians in Shanghai are coping with strict COVID-19 lockdown

Stuck at home for weeks, these Canadians living in Shanghai admit they’re feeling lockdown fatigue. Food rations can be sparse, forcing some residents to barter for what they need. 2:04

On Friday, Chinese internet users shared a six-minute video called “Voices of April” that documents some of the most challenging public moments the city has experienced in the nearly month-long lockdown. One part features audio of residents in one Shanghai community who protested on April 8, screaming: “Send us food! Send us food! Send us food!” in unison.

The video blanketed WeChat timelines before it was abruptly removed by censors Saturday.

Chinese authorities have continued to say that the “zero-COVID” strategy is the best way forward given low vaccination rates in people over age 60, and that omicron would result in many deaths and severe illnesses if the country ended its strict approach.