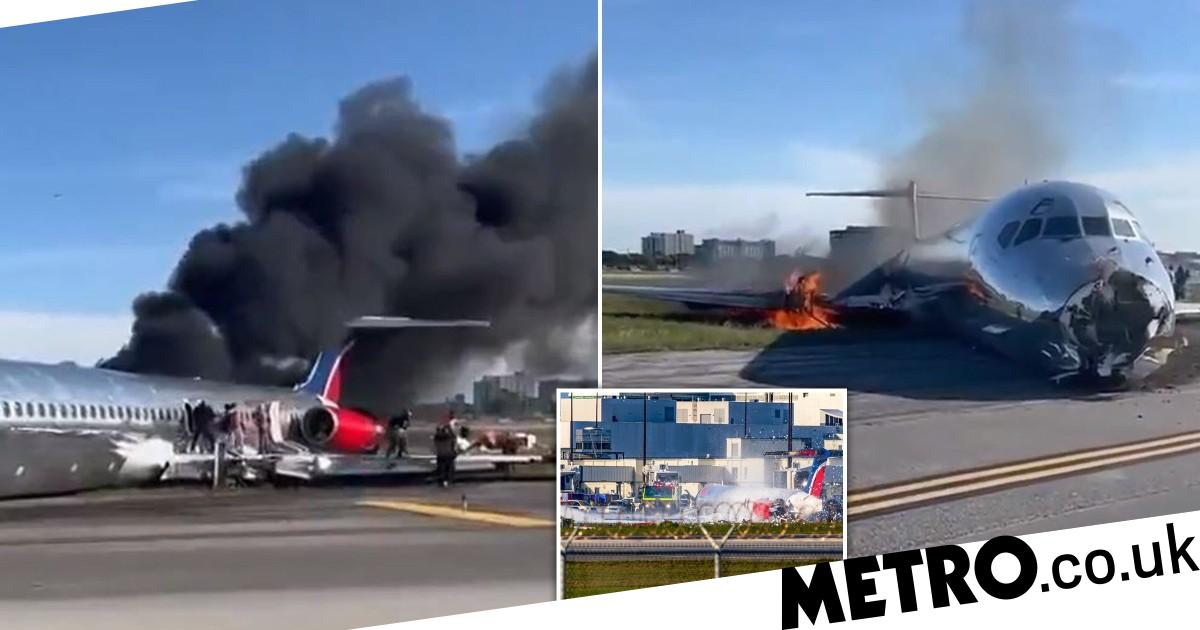 A plane carrying 137 people crash landed at a Miami Airport before it burst into flames.

The pilot was forced to take evasive action after the aircraft’s landing gear failed.

Passengers reported ‘panic’ and ‘screaming all around’ during the incident, which took place aboard a Red Air flight.

It had departed from Santo Domingo in the Dominican Republic on Monday.

The aircraft had been arriving into Miami Airport at 5.30pm when disaster struck.

A small building and a communications tower at the terminal were both hit due to the force of the chaotic landing.

The plane eventually came to rest near a grassy area by the side of the runway before thick smoke started to billow from the left wing.

Three people were taken to hospital following the incident.

‘I thought I was going to die, actually,’ Paola Garcia told CBS Miami. ‘There was an old man next to me and I was hugging him. It was horrible.’

‘We were bumping from side to side and all the windows like break and then everything’s fine.

Red Air is a discount airline which was founded last year in the Dominican Republic.

The plane was carrying 126 passengers and 11 crew members when it was forced to crash land.

Footage from the incident shows black smoke billowing from a fire on the left wing of the aircraft.

Firefighters who were rushed to the scene used flame-retardant foam to extinguish the flames.

Some passengers could be heard screaming as they rushed to escape the still burning plane.

A spokesperson for Miami Airport said that flights were delayed due to the crash.

Miami-Dade County mayor Daniella Levine Cava has travelled to the scene this morning.

She tweeted: ‘A plane arriving at @iflyMIA from Santo Domingo, DR caught on fire following a landing gear malfunction.

‘I have just arrived on the scene and am being briefed by @MiamiDadeFire.

‘Three passengers were transported to the hospital with minor injuries.’

The aircraft was a McDonnell Douglas MD-82, it has been confirmed by authorities.