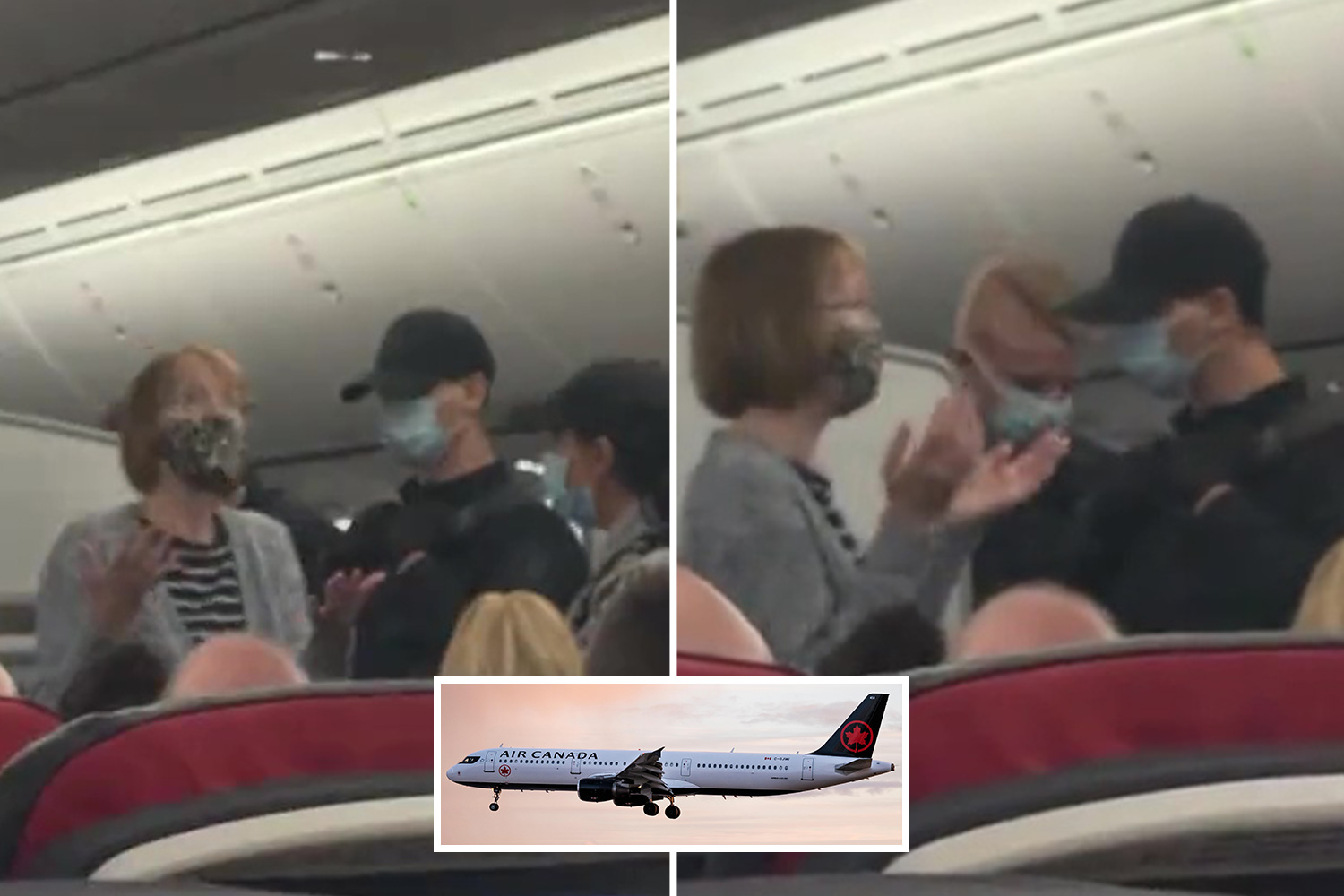 THIS is the moment an elderly Brit couple and 23 others were hauled off a Heathrow-bound flight by armed cops, despite doing NOTHING wrong.

Over two dozen furious flyers were removed from the Air Canada aircraft on Monday evening without any explanation from staff.

Air Canada has since admitted some of the travellers had been “mistakenly” kicked off the flight but claimed others were hauled off for “disruptive behaviour”.

The airline suggested some passengers on the flight from Montreal’s International Airport had failed to wear face masks.

But they refused to confirm how many travellers had been wrongly removed as they sat on the tarmac on Monday evening.

Air Canada chiefs have been contacting the blameless passengers to apologise for the blunder and are said to be discussing possible compensation with them.

Several support staff from Formula One teams were on the flight after visiting Montreal for the Grand Prix.

She shared a clip of the cabin chaos, claiming armed cops began escorting people off “at random with no explanation”.

Jess said this included an elderly couple, a pregnant Williams team member and a young family of four.

The Brit couple said they were caught in the crossfire on flight AC866, before being “left stranded” in the airport terminal.

Richard Brailey, 71, and wife Patricia, 66, were dragged off the aircraft before being told by an Air Canada employee it was an “order from the captain”.

He told the Daily Mail: “We had waited for about an hour for the plane to take off when a member of staff with a list of numbers came along looking up and down the rows.

“They started looking at the seat numbers and earlier removed two young girls from three or four rows in front of us.

“Then they pointed at us, and told the police with them to remove us. We were totally flabbergasted.

“We had just been sitting in our seats normally with our masks on and looking forward to getting underway.”

Their furious son Patrick also detailed their exhausting plight on Twitter, explaining the couple’s removal was “obv a huge mix up”.

Then they pointed at us, and told the police with them to remove us. We were totally flabbergasted.

He said: “My elderly parents religiously wore their masks and were not drunk. Been left stranded in terminal!?”

The rejected passengers were told they could not board another Air Canada flight for 24 hours after their removal.

And because they were given the boot, the travellers were told it was their responsibility to arrange an alternative flight.

Richard added: “It was utterly bizarre because there was no noise or aggravation on the flight.

“As far as I could tell everyone was behaving properly, and we certainly were.”

He also claimed the man next to him and Patricia had been asleep under a blanket before he was woken up and removed.

The Williams Racing team confirmed four staff members were ordered off the plane and are still “waiting for an explanation”.

They said: “A total of 28 people were removed from the flight, and we are currently awaiting an explanation from Air Canada as we do not believe that there was any justification for the removal of our employees.

“As Williams Racing, we ensured our staff had transport and accommodation while they waited to be rebooked onto another flight.

“We confirm they are all now safely back in the UK and we await a response from Air Canada.”

Air Canada confirmed that 25 passengers were “deplaned” from the flight.

A statement from the airline said: “We are currently investigating the circumstances surrounding this incident involving a group of 25 customers who were removed from our flight from Montreal to London Monday night, due to disruptive behaviour.

“We understand that there are allegations that in the course of removing these passengers, certain unrelated individuals were deplaned as well.

“Some of these deplaned customers were rebooked this morning and are on their way to their final destination.

“Once our investigation is completed, we will follow up with the customers.”

A spokesperson for Montreal Trudeau International said police had been called to deal with “a situation on board an aircraft on the evening of June 20 and escorted passengers off the plane, at the request of the flight captain and crew.”