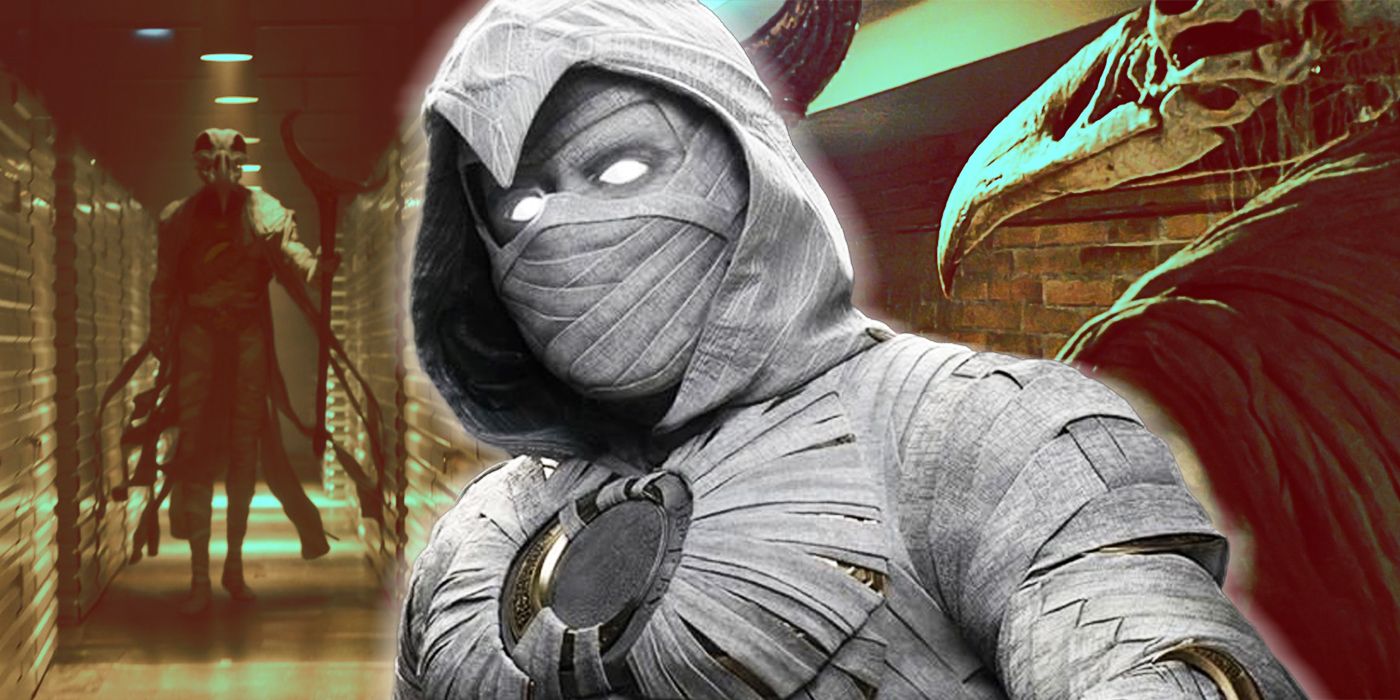 Steven Grant is an affable young man living in London who chains himself to a pillar while he sleeps, spreads fistfuls of sand around his bed and tapes the seam of his door to prevent him from adventuring in the middle of the night while also alerting him at a glance if his failsafes have proven inadequate. His alternate identity is a mercenary named Marc Spector who was chosen by the Egyptian moon god Khonshu to be his fist of vengeance on Earth. Spector protects and avenges those who are in danger or who have been wronged in the guise of Moon Knight.

Khonshu’s previous Avatar posed a question that lies at the heart of the show. “Do you think that Khonshu chose you as his Avatar because your mind would be so easy to break or because it was broken already?” This is linked to the idea of which of the two personalities viewers have seen so far would be considered the primary, or in other words, which came first? There has been no definitive answer thus far but the following will lay out the case for both questions. Did Khonshu choose someone whose mind then divided or was it already partitioned when Khonshu made the choice and what does this imply about the identity of the primary personality.

Arthur Harrow is the one who posed the question to Steven but like many of his queries he probably already had the answer before he asked. After failing to get Steven to relinquish the scarab he did everything in his power to either take it by force or coerce Steven into relinquishing the compass to Ammit’s ushabti. During this attempt at persuasion he mentions that Khonshu often chooses those with a strong moral conscience, though both gods may just be using their Avatars for their own purposes disguised as righteousness. Harrow’s implication however is that Khonshu is also looking for someone whose will might be more malleable or prone to obey without question since Harrow himself is a cautionary tale of what may happen when an Avatar decides to abandon their patron.

There are arguments to be made that both Steven and Marc have displayed the moral fiber Harrow describes but while Marc has led a life seemingly rationalizing killing in the name of money as a mercenary or in the name of justice for Khonshu, Steven is possessed of an extremely empathetic and benevolent nature. He has demonstrated that he would rather die than allow his body to be used to hurt others. He only relinquished his autonomy when Marc pointed out that innocent bystanders would be in danger if he didn’t wrest control away from Steven. This could imply that Steven is the primary consciousness.

When he was falling to his death he summoned the suit as Layla requested and Khonshu demanded, but it resulted in something specific to who Steven is and had nothing to do with Marc. Instead of curved blades he was bestowed with blunt instruments and instead of armor he was fitted with a tailored suit. This new manifestation suggests that each soul serves Khonshu in their own way, though both it seems do so under a certain amount of duress and Khonshu has made it very clear who he favors.

Khonshu states it was Marc who was found as a corpse when the Egyptian moon god revived him and it was Marc with whom he had a binding contract. Khonshu states that the two of them need one another and reassures Marc that he would do anything to protect him because he is worthy of protection. Khonshu obviously values Marc’s skillset and considers him to be a suitable bearer of the powers bestowed upon Moon Knight. In contrast the deity disparages Steven at every turn, referring to him as an idiot, fool and parasite at different moments while Steven is in control.

There is also Steven’s relationship to Layla to consider. When she comes across a book of poetry by Marceline Desbordes-Valmore Steven claims that she is her favorite poet and he is studying how to read hieroglyphics, an area where Layla is already fluent. Steven also takes this opportunity to tell Layla that he would never divorce her, something that Marc is in the process of doing reluctantly. This all supports the idea that Steven is a reaction to Marc’s failures with Layla and an expression of the love that he feels for her. Whereas Marc has to establish distance to try and keep her safe, Steven shares her interests and is devoted to her in a way that Marc cannot allow. Layla also represents evidence that Marc existed prior to the last several months but there is no indication that the same could be said for Steven.

RELATED: Moon Knight Director Is ‘Absolutely Sure’ Marc Spector Will Be an MCU Mainstay

He is living in a flat that he believes belongs to his mother but there is yet no evidence that she even exists. Instead most of the information available to viewers implies that Marc has arranged the postcards Steven receives from her in the same way he provides Steven with other aspects of his life in an attempt to curtail his loneliness and make him happy. Whether it was asking his co-worker out on a date on his behalf, replacing his goldfish or the very fact that Marc has been keenly aware of Steven’s presence while the reverse has not been true, Marc has performed as a caretaker for Steven.

These clues when put together suggest that Khonshu chose Marc at a time when his mind was unified and some inciting incident, perhaps contact with Khonshu’s mind itself, spawned at least one additional personality and Steven represents a reaction to that trauma. Marc’s promises to Steven that once this is over he will never see him or hear from him again suggest that Steven is the core personality but it may just be evidence that Marc is choosing his words carefully because he believes once his mission has been completed Steven will no longer exist. A few questions remain however, such as was it Khonshu who caused the split or was it something else and are there perhaps more identities to discover?

To solve these mysteries, Moon Knight is streaming now on Disney+, new episodes airing on Wednesdays.

Last marines defending Mariupol running out of ammunition: ‘Death for some of us, captivity for others’