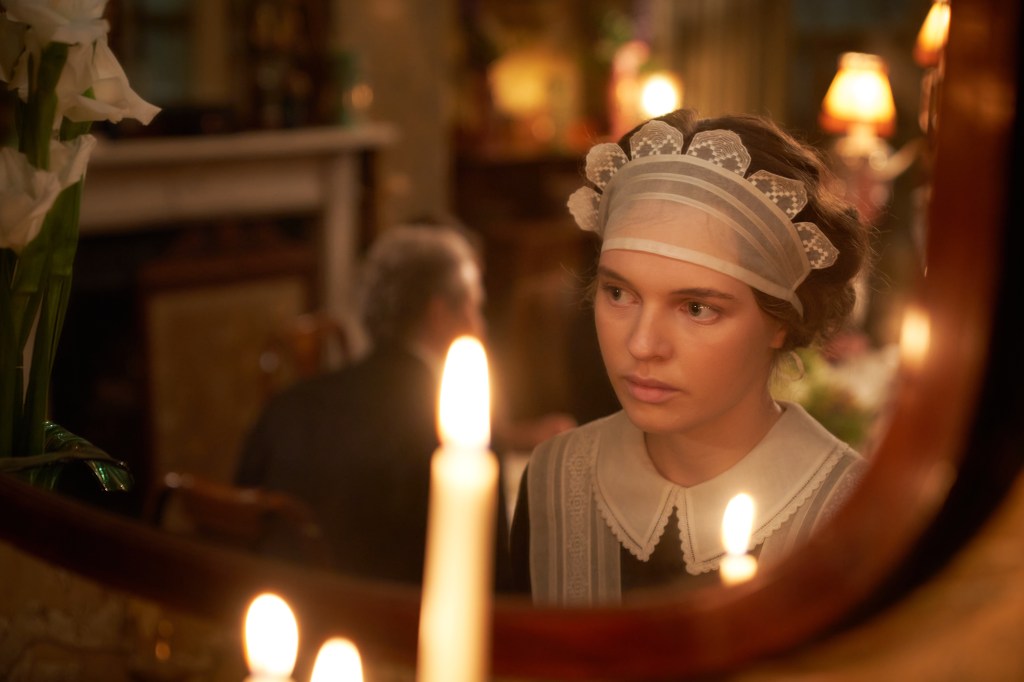 Mothering Sunday is a Christian celebration of mothers and mother churches in the United Kingdom and elsewhere on the fourth Sunday of Lent. The Graham Swift novel-based film “Mothering Sunday” is an “Upstairs/Downstairs” sort of story about a beautiful maid who has an affair with the scion of a wealthy family that is friendly with the family for whom she works. The story takes place over the course of a single day for the most part.

After awakening and dressing for work in the enormous house of the wealthy husband and wife the Nivens aka Godfrey (Colin Firth) and Clarrie (Olivia Colman), an older couple grieving the death of their sons in World War I, their well-read and intelligent maid Jane Fairchild (Aussie Odessa Young, “Assassination Nation”) rides a bicycle to a neighboring estate, where she secretly meets young Paul Sheringham (Josh O’Connor, “The Crown”), whose brothers died in the war and who is engaged to the Nivens’ wild child daughter Emma (Emma “D’Arcy, “Truth Seekers”). Oh, what a tangled web we weave.

“Mothering Sunday” flits around in time like a drunken bat. For the most part, it concentrates on the day Jane and Paul meet for sex. The lout is expected at an engagement lunch with his parents and the Nivens, who like most families of the time in England have also lost sons in the war. Although Paul and Jane could never marry according to the rules of the society of the time, he is obviously besotted by her.

In flash forwards, we see her working in a bookshop and living with a Black man named Donald (Sope Dirisu, “His Dark Materials”), a fellow writer and also a philosopher. She works on what appears to be a novel using a typewriter given to her as a hand-me-down. We also see shots of a much older woman (Glenda Jackson) in a more contemporary time, who we learn is also Jane. The shorter Jane’s hair gets the closer we are to the present time.

Swift’s novels have won awards. “Waterland,” which was shortlisted for the Booker Prize, was adapted to the screen very successfully with Jeremy Irons and Ethan Hawke, in 1992. “Mothering Sunday,” which was directed by Eva Husson (TV’s “Hanna”) and adapted by Alice Birch (“Lady Macbeth,” TV’s “Succession”), has a been-there, done-that vibe compounded by its Julian Fellowes-“Downton Abbey” setting and costumes by three-time Academy award winner Sandy Powell and its “forbidden” love affair between a servant and a member of the upper class.

In a prolonged sequence, Jane goes meandering about Paul’s manor house in the nude, inspecting especially the well-stocked library, where she smokes a cigarette. In the kitchen she has a big slice of a savory pie (a metaphor for her lover?). In scenes set presumably in the latter 1920s, Donald trips and falls while on a walk with Jane, injuring his knee and forehead. Such an event never bodes well.

Young, who is terrific in the underappreciated genre movie “Assassination Nation” (2018), is charming as Jane, although, outside of several literary references (Virginia Woolf, Robert Louis Stevenson), there is little to suggest that Jane, who turns out to be an alter ego for Swift, is going to become a major prize-winning writer. “Mothering Sunday” has too many familiar British literary tropes to be taken very seriously.

Swift won the Booker Prize for ”Last Orders” (1996), which was made into a wonderful 2001 film by Aussie Fred Schepisi. I suggest you see that instead.