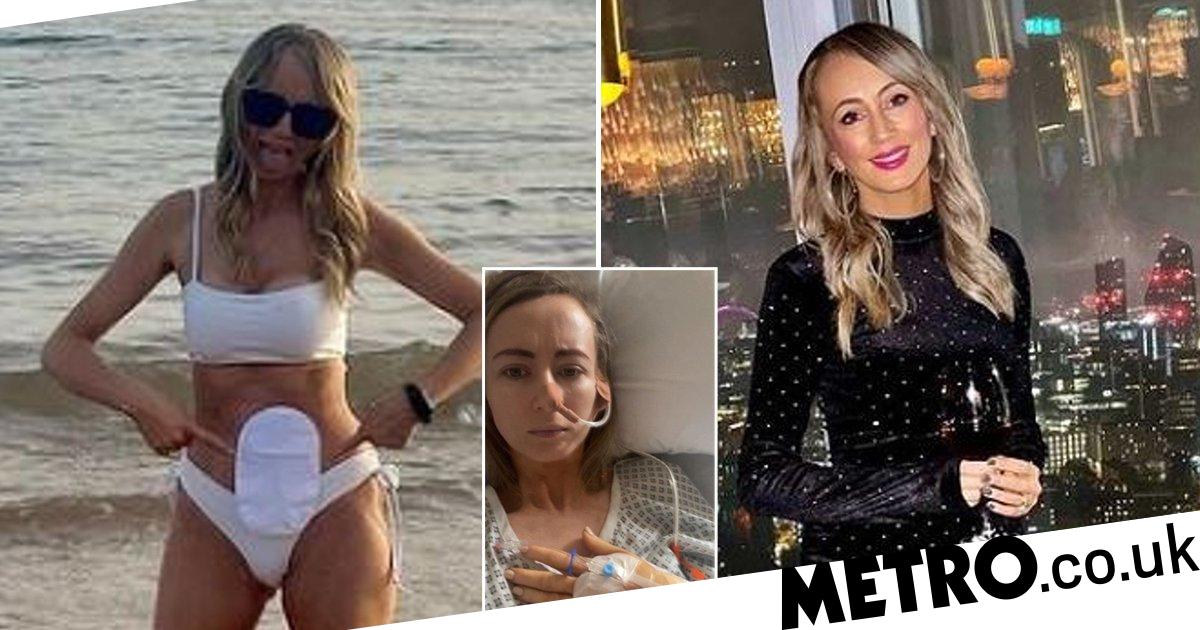 This mum-of-two is urging the government to reduce the age limit for bowel cancer tests, after being diagnosed at just 37 years old.

Amy Prowse said she found out she had the disease in May this year after doctors initially believed her symptoms were down to diverticulitis – a digestive condition that affects the bowel.

The teaching assistant from Exeter, Devon, had been experiencing agonising stomach pains last year, which worsened as time went on.

After noticing blood in her stool, she went to see her doctor who ran tests that revealed she was anaemic.

However, by March this year Amy’s pain in her stomach became so severe that she ended up in A&E and was hospitalised for four days and later diagnosed with diverticulitis, which is uncommon in Amy’s age group.

It was during a checkup just a few months later that she was given the devastating news that she had bowel cancer.

Amy is now campaigning for the UK Government to work alongside the NHS to offer screening to people as young as 30 – instead of the current age of 50.

She believes earlier screening could have detected her cancer before it progressed, and she may not have had to have part of her colon removed and live with a stoma.

Writing on a petition, which was set up last month and has over 70,000 signatures, Amy said: ‘I was diagnosed with Bowel cancer aged 37 after being misdiagnosed with diverticulitis.

‘Misdiagnosis is common in people under 50 because they are considered too young to have bowel cancer and red flags are ignored.

“There is no age limit to bowel cancer.’

As well as reducing the age limit for screenings, Amy wants over 18s with concerns to be able to opt into the service too.

‘This will save lives,’ she said, adding: ‘There are approximately 42,886 cases of bowel cancer each year. Bowel cancer has a 54% survival rate, if caught early enough.’

While trying to work out the cause of her health issues (which included blood loss in stools, pain, and later a perforated bowel) Amy says cancer wasn’t considered by doctors,

She explained: ‘My blood loss and pain was thought to be a gynaecological issue and I was diagnosed with anaemia.

‘Even a perforated bowel didn’t seem to ring alarm bells. Cancer was not a consideration.

‘We now know I was losing blood via stools, without realising and a tumour had perforated my bowel, eventually causing excruciating pain.

‘Screening could have detected this and I may not have had to have part of my colon removed in emergency surgery and have to live with a stoma.

“I want it made possible to stop this cancer in its tracks before it gets to my stage or further for anybody else.’

Amy’s petition has attracted hundreds of messages of support from members of the public who agreed with the need to lower the age range.

Currently due to start her sixth cycle of chemotherapy, she says things are ‘going ok.’ However, her life has been dramatically changed by cancer.

‘It’s hard not being able to work and live a normal life,’ she said.

The death of Dame Deborah James, who blogged about her bowel cancer diagnosis at 35 under the name Bowelbabe, sparked conversations around spotting signs of cancer and the importance of screening.

Amy echoes these sentiments, saying: ‘Cancer only gets worse if left ignored.

‘I always say “check your poo to save your life” and encourage people to chat if they feel somethings not right.

‘I think people believe they are overreacting, or will waste the time of the NHS or it will go away. However, any symptoms really do need to be checked because as I say cancer doesn’t just disappear of its own accord.’

The mum added: ‘Surgery or having a stoma to live with could also be avoided if people go and visit the doctor at the first sign of any of the symptoms.

‘This is why I’m pushing for the screening because it can be detected asap and help to avoid treatments and surgeries.

‘It also cuts out the embarrassment of talking to people or visiting the doctor which is part of the problem.’

Up until last year, people aged 60 to 74 years were automatically sent an NHS bowel cancer screening kit every two years.

In August 2018, ministers agreed that bowel cancer screening should start at 50 instead, which was set to come into place last year.

A spokeswoman for the Department of Health and Social Care today (THUR) said: ‘NHS England is reducing the age of its Bowel Screening Programme to 50 years old and we urge all those eligible to use the testing kits when they receive them.

‘The independent UK National Screening Committee recommends bowel screening for individuals aged 50-74 every two years and welcomes new ideas for screening via its annual call for topics, which is open until 5 December.’


MORE : How to talk to your children about HPV