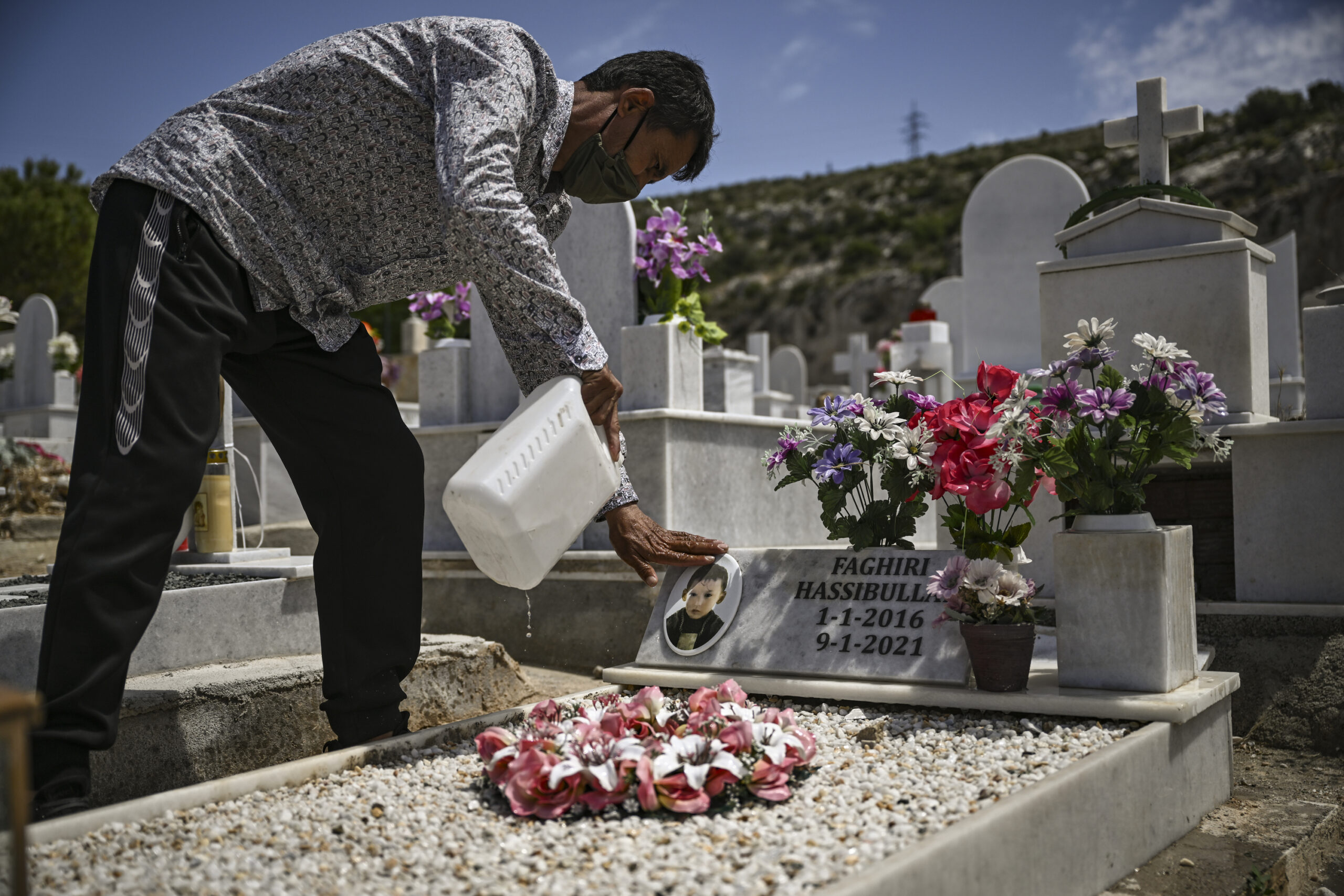 Standing by the tiny grave of his five-year-old son in the Orthodox Christian cemetery of Schisto on the outskirts of Athens, Esfandiyar Fagkiri says he feels a “dual pain”.

Not only has he lost one of his five children, but the Afghan family cannot mourn him according to Muslim religious ritual because the cemetery is Christian.

Hasibollah Fagkiri was hit and fatally injured by a truck in January 2021 while playing with other children near the entrance to the Malakassa migrant camp, north of Athens, where he had been living with his family since September 2020.

NGOs and local authorities blamed the accident on the camp’s poor safety conditions and said it should be shut down.

After burying their son, the Fagkiris were shocked to be told that his body must be exhumed after three years — in 2024.

This is standard procedure in Greek cemeteries due to a chronic lack of space — especially in the greater Athens area where more than a third of the country’s population of over 10 million live.

But for Hasibollah’s grieving family, it is unthinkable.

Islam does not allow exhumation or cremation and in the Muslim religion, the body remains buried forever, Fagkiri pointed out.

But for people without a paid family grave, “exhumation after three years is mandatory,”

insisted Dimosthenis Stamatatos, head of an association of municipalities near the cemetery of Schisto.

The remains of the dead are often kept in a special annex of the cemetery church.

Greece is a predominantly Orthodox Christian country, and Muslim cemeteries can only be found in Thrace, a region in the northeast of the country near the Greek-Turkish border, 750 kilometres (466 miles) from Athens.

The area is home to a centuries-old Muslim minority, a legacy of the Ottoman Empire’s presence in the area.

In Athens, the number of Muslims used to be negligible, but this has changed in the wake of the 2015 refugee crisis.

There are now about half-a-million Muslims in the Greek capital after successive migration waves and the arrival of thousands of families from the Middle East, North Africa and the Indian subcontinent fleeing war and poverty.

Thrace is too far away for most families to bury their dead there, and the cost of transferring the bodies is prohibitive.

“Given the high cost of transferring the dead to Thrace, the number of burials of Muslims in Orthodox cemeteries in Athens has increased in recent years,”

The Covid-19 pandemic has made things even harder for grieving families, he said.

According to Javed Aslam, a leading member of the Pakistani community in Greece, Muslim migrant communities have long been calling for a cemetery in Athens.

ALSO READ: ‘My body my choice’: Thousands rally across US for abortion rights

Municipal official Stamatatos pointed out that in 2016 the Orthodox Church of Greece donated 20 000 square metres (five acres) of land at Schisto cemetery for a section reserved for Muslims.

But a legal dispute with the contractor has delayed the completion of the project.

A senior official at the Greek ministry of education, which also oversees religious matters, said the project has been given the go-ahead and “will be carried out given the large number of Muslims in Athens.”

But rights groups and the main opposition leftist party Syriza are not so optimistic, pointing to the current conservative government’s strong anti-migration rhetoric amid recurring allegations of illegal migrant pushbacks at the country’s borders.

“When it comes to respect for the rights of migrants and refugees, the context in Greece is negative,”

The first official mosque in Athens opened in November 2020, taking more than a decade to complete after running into strong opposition from the Orthodox Church, as well as from nationalist groups.

Harper, Phillies continue to roll with 8-3 win over Dodgers