N.Y. attorney general wants Trump held in contempt for not handing over documents 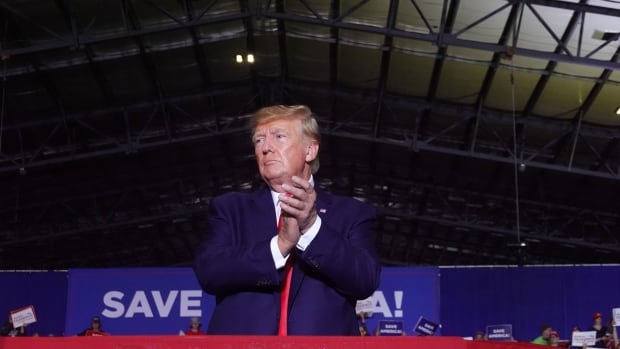 New York’s attorney general on Thursday asked a state judge to hold Donald Trump in contempt of court for not turning over documents she subpoenaed for her civil probe into the former U.S. president’s business practices.

In a court filing, Attorney General Letitia James said Trump failed to honour a court order that he comply “in full” with her subpoena for documents and information by March 31.

James asked that Trump be fined $10,000 US a day, and perhaps more, until he complies.

“The judge’s order was crystal clear: Donald J. Trump must comply with our subpoena and turn over relevant documents to my office,” James said in a statement.

“Instead of obeying a court order, Mr. Trump is trying to evade it.”

A lawyer for Trump vowed to “adamantly oppose the frivolous and baseless motion.”

“Our client has consistently complied with the many discovery requests served by the attorney general’s office over the years,” Alina Habba said in an emailed statement.

Trump himself slammed James as an “operative for the Democrat Party” and called her effort to sanction him “a continuation of the greatest Witch Hunt of all time.”

“I’ve been investigated by the Democrats more than Billy the Kid, Jesse James, and Al Capone, combined,” Trump said in a statement. “This has been going on for years, and in all cases, I have been innocent.”

James’s three-year probe and a parallel criminal probe led by Manhattan District Attorney Alvin Bragg have focused on whether the Trump Organization misstated the values of its real estate properties to obtain favourable loans and tax deductions.

Last week James said her probe had found “significant evidence” suggesting that for more than a decade the company’s financial statements “relied on misleading asset valuations and other misrepresentations to secure economic benefits.”

James has questioned how the Trump Organization valued the “Trump brand,” as well as properties including golf clubs in New York and Scotland and Trump’s own penthouse apartment in midtown Manhattan’s Trump Tower.

On Feb. 17, Justice Arthur Engoron of the New York state court in Manhattan ordered Trump to produce documents covered by the subpoena and for Trump and his adult children, Donald Trump Jr., and Ivanka Trump, to be questioned under oath.

Trump later obtained an extension through March 31 to produce documents. He and his children asked a state appeals court to overturn the ruling requiring their testimony.

Not an ‘opening bid’ to renegotiate

In a March 31 court filing, another lawyer for Trump objected that the subpoena was “grossly overbroad,” and unduly burdensome and sought information protected by attorney-client or executive privilege.

But James said on Thursday that Engoron’s order was not an “opening bid” entitling Trump to renegotiate the subpoena.

“The ship has long since sailed on Mr. Trump’s ability to raise any such objections,” she wrote.

James said given Trump’s “purported meticulous involvement” at his company, “it seems incredible that now virtually no documents exist,” suggesting he had a personal role in reviewing asset valuations.

And while James has received Trump’s personal tax returns from 2011 to 2018, she said Trump has stonewalled on providing other materials, including documents or notes in his own handwriting.

In February, Trump’s longtime accounting firm Mazars USA cut ties with him and the Trump Organization, saying it could no longer stand behind a decade of financial statements.

The Trumps have called James’s probe “a politically motivated gambit that was commenced in bad faith,” something intended to advance her career at their expense.

James, a Democrat, is seeking re-election in November. Trump, a Republican, may seek a second White House term in 2024.

The status of Bragg’s criminal probe has been uncertain, following the resignation in February of the two senior prosecutors who had led it.

According to the New York Times, Bragg, who took office in January and inherited the criminal probe from fellow Democrat Cyrus Vance Jr., has expressed doubts about pursuing charges against Trump.

In a statement on Thursday, Bragg said his office’s investigation is continuing and defended his handling of it.

“Prosecutors fulfilling their duties cannot and do not bring only cases that are slam dunks,” he said. “I pledge that the office will publicly state the conclusion of our investigation — whether we conclude our work without bringing charges or move forward with an indictment.”

Why does The Callisto Protocol run better on PS5? Maybe…

Why Oakland is naming this street after one of its biggest…

Poaching A Nanny From This Child Care Provider Comes With A…