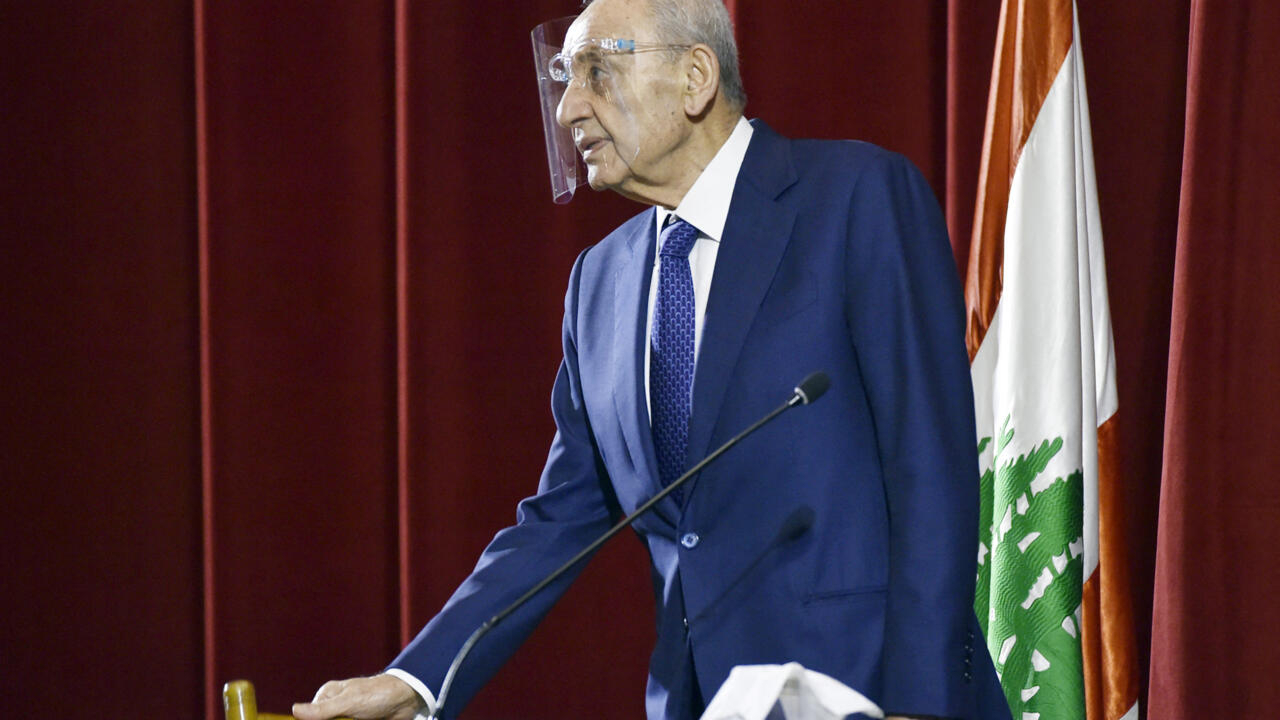 Lebanese lawmakers on Tuesday re-elected Nabih Berri as parliamentary speaker for a seventh consecutive term, cementing the octogenarian politician’s reputation as an “untouchable” figure in Lebanese politics. FRANCE 24 profiled the controversial politician on May 19, 2022.

On October 14, 2021, residents of Beirut were shaken by deadly armed clashes right by the birthplace of Lebanon’s 1975-1990 civil war.

Six people were killed as rival gunmen fired at each other while residents cowered, schoolchildren dashed for safety, and the city froze with a heightened awareness that Lebanon remains just a hair’s breadth away from all-out sectarian conflict.

The October clashes erupted when a protest by two Lebanese Shiite parties – Hezbollah and Amal – arrived at the Tayouneh roundabout, which links the Christian neighbourhood of Ain El Remmaneh with the Shiite stronghold of Chiyah.

Today, the two rival camps are critical actors in Lebanon’s next political steps following Sunday’s parliamentary elections. At stake is the future of a country in the grips of a devastating economic crisis, which requires an IMF bailout, which in turn needs a functioning government.

The results of Sunday’s vote were encapsulated in headlines this week proclaiming, “Hezbollah and its allies lose parliamentary majority”. News stories hailed the record 13 seats won by reform-minded political newcomers entering a system of entrenched parties and interests.

But the after-party celebrations have been subdued with the glum reckoning that Sunday’s vote has set the stage for a round of backroom dealings and deadlocks at best – or violence at worst.

In the absence of an outright majority in Lebanon’s 128-seat parliament, the largest blocs in the new parliament are the two camps that faced off and traded accusations at the Tayouneh roundabout last year.

The 2022 vote may have heralded a historic rise of reformist newcomers in parliament. But the next step in Lebanon’s democratic process involves the oldest member of parliament.

Enter Nabih Berri, an octogenarian central figure in Lebanon’s postwar politics and an icon – according to critics – of everything that is wrong with the country’s political system.

For many Lebanese who voted for change, Berri is the embodiment of a system that has spawned political paralysis, economic collapse, and the sort of rampant mismanagement that enabled the deadly 2020 Beirut port explosion. “He represents everything that is wrong with the Lebanese system, which is today not only a kleptocracy, but also a gerontocracy,” said Karim Emile Bitar, director of the Institute of Political Science at the Saint Joseph University of Beirut.

Exactly a week after the May 15 vote, Lebanon’s newly elected parliamentarians are expected to begin a new legislature following the expiration of the current assembly’s mandate.

Their first mission will be electing a new speaker, a position 84-year-old Berri has held since 1992. After three decades in the powerful post, Berri – the leader of the Shiite Amal party – is in the running for a seventh consecutive term and has no intention of retiring.

“Nabih Berri is the quintessential crooked Lebanese political dinosaur,” explained Bitar. “He has been speaker for the past 30 years, which is unprecedented even by Lebanese standards, and he could very well be elected once again.”

The problem this time though, is that not everyone is inclined, or resigned, to a Berri speakership – and that can be dangerous in Lebanon.

After his party made major gains in Sunday’s vote, the Christian Lebanese Forces (FL) chief and arch Hezbollah foe, Samir Geagea, laid down the gauntlet by vowing never to support Berri’s re-election. “Electing the head of parliament will not take place as it used to,” Geagea told a local TV station. “We want a parliamentary speaker that stands for Lebanon.”

‘Our candidate is Nabih Berri’

But critics say Lebanon’s democratic system serves not so much the nation as the country’s political elites.

Under an antiquated confessional system, the Lebanese presidency is reserved for a Maronite Christian, the prime minister’s post is held by a Sunni Muslim, and the parliamentary speaker’s position goes to a Shiite Muslim.

While Hezbollah and its allies lost its parliamentary majority in the latest election, the two Shiite parties – Hezbollah and Amal – won more seats this year than in 2018. “They will use the argument of so-called consociational democracy,” said Bitar, referring to power-sharing to avoid violence, “saying that even though we do not have an absolute majority in parliament, considering we control all Shiite seats, one of us has to be the speaker and our candidate is Nabih Berry.”

Lebanon’s confessional political arrangement has not changed despite frequent calls for an overhaul, including by a youth-led protest movement that erupted in October 2019 in the wake of the devastating economic crisis.

The protest movement saw several civil society and activist leaders enter the political fray and, for the first time in Lebanese history, win an exceptional 13 seats.

But now that a record number of newcomers have entered parliament, their first test will be their resolve to challenge the Shiite power axis.

Since the end of the Lebanese civil war in 1990, Berri has earned a reputation for being “virtually untouchable”, an indispensable figure wielding charm and force to get his way on the political stage. It was a long journey for the son of a trader, born in West Africa, to the position of Lebanon’s top political zaim – or overlord.

Born in 1938 into a trading family that had moved to Sierra Leone, Berri returned to his native Lebanon, where he earned a law degree and worked in the Lebanese courts in the 1960s.

It was a time when Musa al-Sadr, a charismatic Shiite cleric, arrived in southern Lebanon to set up social services for the historically marginalised Shia community.

At a time when leftists – including communists – in the Arab world were engaged in social justice issues, attracting urban youths, Sadr formed the Harakat al-Mahrumin, or Movement of the Dispossessed. The movement, that later became Amal (Hope), effectively co-opted the Shiite Left, placing religion at the heart of class struggle.

When the Lebanese civil war broke out, the movement initially stayed out of the conflict. But when Berri took over the movement’s leadership in 1980, he didn’t hesitate to get involved in the war. During the bloody, internecine sectarian strife, Berri’s militia fought against almost every side, including at one point, an upstart Shiite rival called Hezbollah.

The 1990s end of the civil war saw Berri, like most Lebanese warlords, turn into state players. Amal settled its differences with the overly religious Hezbollah movement, and the two parties established a mutually beneficial working relationship.

“Nabih Berri is helpful to Hezbollah because he can maintain bridges between Hezbollah and various Western countries which have put Hezbollah on terrorist organisation lists. So, he is Hezbollah’s ally, but he’s also able to talk to the Saudis, the Americans, to the French,” said Bitar. “He is the face that Hezbollah uses when it wants to negotiate with countries that are not ready to talk directly with Hezbollah.”

Berri’s ability to engage with all players and to joke and defuse tensions inside and outside the chamber have made him an indispensable figure in Lebanon’s complex political landscape.

In his role as a canny mediator, Berri has worked to prevent the country from sliding into another civil war. But critics say the process has unfairly enriched him and his allies while robbing the country of a transparent, accountable political system that can tackle the country’s myriad crises.

“The secret of his success is also that he is indeed very bright, very shrewd. He’s a lawyer, but he’s not a heavyweight intellectual, he’s street smart,” explained Bitar.

Days after the 2022 vote, Hezbollah’s powerful chief Hassan Nasrallah on Wednesday called on all parliamentary factions to cooperate.

Nobody “can claim that the majority belongs to this or that group,” said Nasrallah, acknowledging for the first time that his organisation and its allies lost their overall parliamentary majority in Sunday’s poll.

The problem though is that Hezbollah, aided by the very able Berri, has historically only “cooperated” on its own terms. Lebanon’s consociationalism, epitomised by its longstanding speaker, has so far prevented conflict by promoting consultation among political elites. It’s at the heart of the system that the Lebanese voted to change. But Berri’s reelection bid highlights the challenges the tiny Middle East country will face in its next democratic steps.