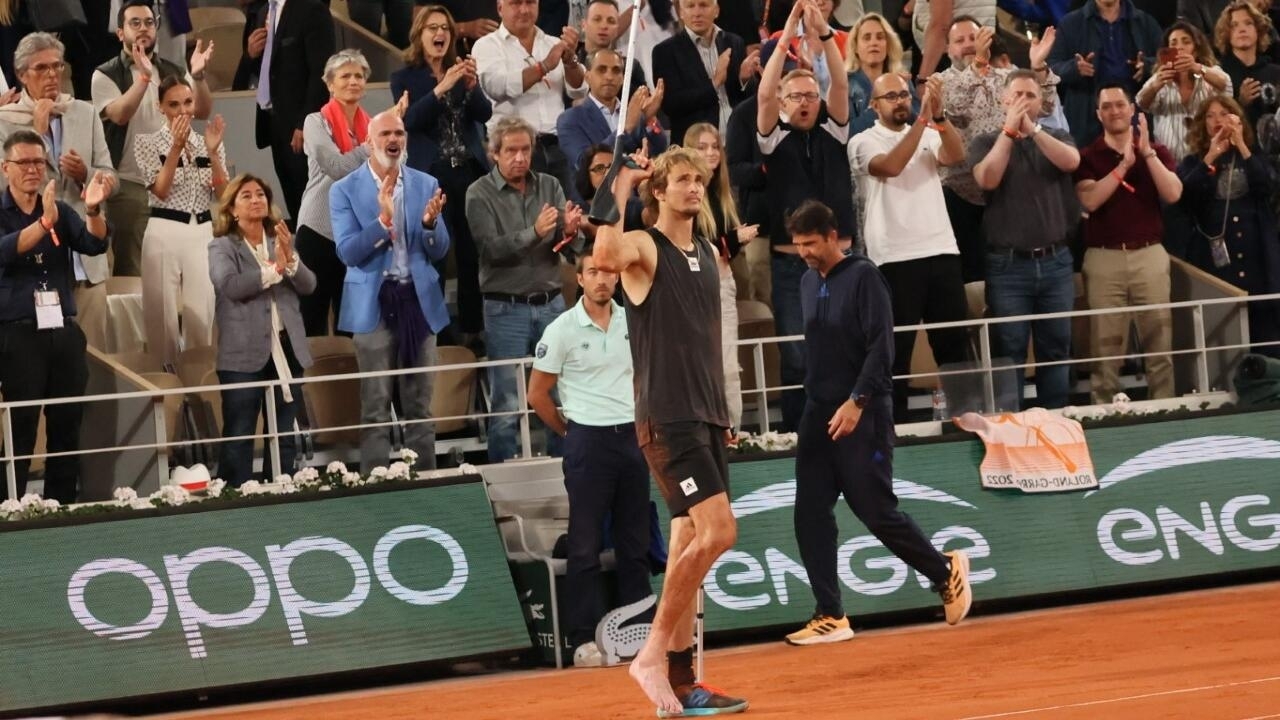 The most extraordinary of semi-finals ended with a piercing shriek of agony. Scrambling to his right to hit a forehand down the line, Alexander Zverev twisted his right ankle as he lunged for the ball. His racquet flew out of his hand on his way down. And he stayed down. In tears.

The combat was just over three hours old and far from finished. But Zverev, contorted in pain, wept in despair.

Rafael Nadal, who had just levelled at 6-6 in the second set, went over to console.

The 25-year-old German left the Court Philippe Chatrier in a wheelchair and returned nine minutes later on crutches to formally concede defeat. Nadal embraced him.

Sympathy mingled with no small amount of gratitude. Zverev was giving the 13-time champion a run for his money on his 36th birthday even though Zverev had botched his chance for early supremacy and then parity in the humid conditions under a closed roof.

After breaking Nadal’s opening service game, Zverev dominated the longer exchanges with the Spaniard but was eventually reeled in at 4-4.

It took the pair 20 minutes to play the next two games.

Nadal held to lead 5-4 and then chiselled out three separate set points. But Zverev fended them off with big serves and adept volleys at the net.

While serving for a 6-5 lead, Nadal had to ward off a break point before forcing Zverev to serve for a second time to stay in the set.

He performed his assignment with little ado.

As he recuperates from his ankle injury, he will revisit the horror that befell him in the first set tiebreak.

But Nadal went on his own roll to save the set points and to notch one  one up for himself at 7-6. Zverev rescued that and another one at 8-7  to Nadal.

He looked well placed to ward off another at 9-8. A 203km/h serve was followed by a thumping forehand into the deep court but Nadal had read the move and unleashed a trademark buggy whip forehand down the line past his stranded opponent to clinch what he later deemed a miracle.

If the first set ended spectacularly, the second sank swiftly into stodge. Seven breaks of serve left Zverev with the chance to serve for the set at 5-3.

But he threw in three double faults on his way to losing it.

From what had gone before, he had good reason to believe that he could still sneak the set.

But Nadal turned stubborn and reached 5-5.

The next time the Spaniard levelled, came the disaster.

“Sascha was playing amazingly. I know how much he is fighting to win a ffirst Grand Slam tournament.

“It’s true the conditions didn’t help me to create the damage I wanted and the first set was a miracle.

“The weight of my ball was not good against him. I was struggling and I was trying to find solutions.”

Nadal, who is seeking a 14th title in Paris and a 22nd Grand Slam singles crown, will take on the eighth seed Casper Ruud.

The 23-year-old Norwegian, who spent a week at Nadal’s academy in Majorca four years ago, beat the 20th seed Marin Cilic in four sets over two hours and 55 minutes

“I’ve been looking up to Rafa all my life,” Ruud told on-court interviewer Fabrice Santoro.

“He’s the perfect example of how to behave on court: never complain and keep fighting.

“I’ve never played him so it will be a special final. A student from his academy playing him in the French Open final. It should be fun.”

Aft Cabin to the fore in stunning return to racing