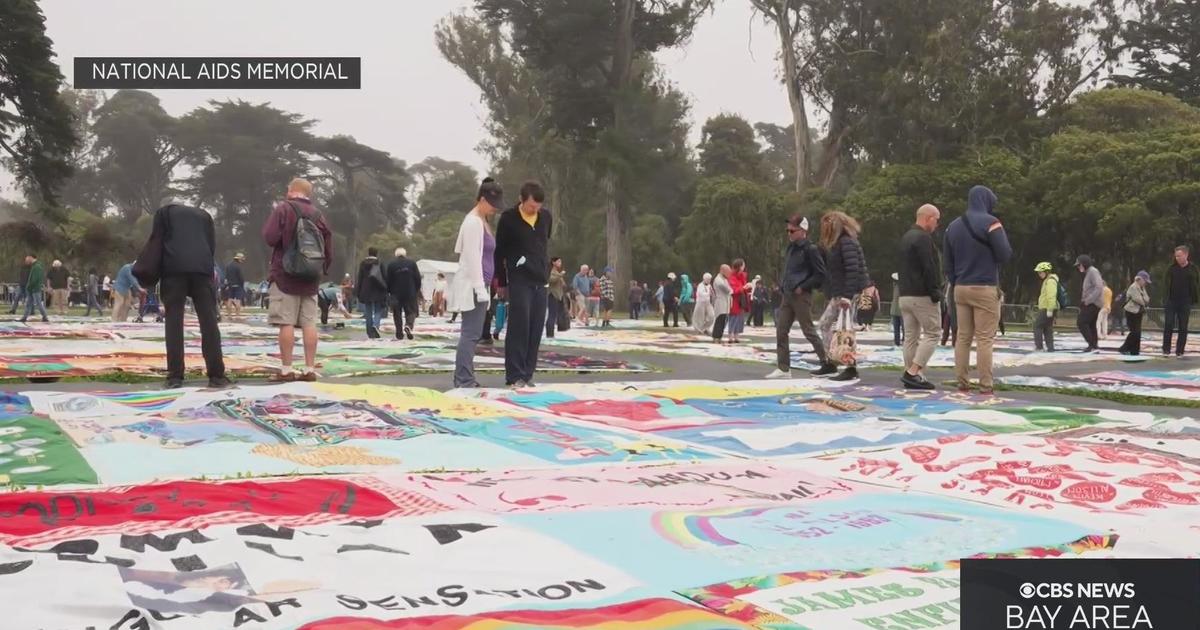 SAN FRANCISCO – Tens of thousands streamed through Golden Gate Park over the weekend to see the National Memorial AIDS Quilt, which was displayed in San Francisco for the first time in nearly two decades.

Near perfect weather for much of the weekend drew scores to the park, to celebrate the 35th anniversary of the quilt’s creation.

“So many people couldn’t even sew, but learned to sew to make that,” said Drew.

Behind each patch, is a story of struggle, loss, and remembrance.

“I had a half a dozen names engraved in the circle of friends and that’s just a fraction of the people that I’ve lost,” said Drew.

Drew and his friend Pam came to touch, embrace, and weep not just today, but both days the quilt rolled out on these green fields of Golden Gate, to remember those who lost their lives to AIDS.

“Every single one is a story and there’s thousands and thousands of them. So it’s incredible. They’re incredibly personal that somebody made that,” said Drew.

The weekend display only represents 6% of the massive quilt that still grows, despite remarkable advances in HIV medicine.

On Sunday, some wet weather forced volunteers to roll up the massive quilt a little earlier than planned.

“We helped with folding the quilt and we both thought that that was something that we would never forget,” said Janolyn King.

“We saw here the community pitch in immediately and started to roll up the quilt and bundled up to get out of the wet and it was just another testament to the power of what this is all represents,” said National AIDS Memorial CEO John Cunningham.

For Drew, saying hello again to the quilt for the second time since its inaugural display at the National Mall in 1987 as a symbol urging the government to respond more swiftly to the AIDS epidemic, isn’t easy.

But like so many others, Drew didn’t miss this chance to touch a tribute, and honor all lives lost.

Funds have been raised to explore the possibility of building a permanent home for the quilt at a center for health and social justice.

The National AIDS Memorial confirms if it happens, it will be built in San Francisco.

Following this weekend’s display, the quilt will begin what the National AIDS Memorial is calling a “Justice Tour” for the next two years. The tour, which is starting in Jackson, Mississippi, is putting a spotlight on health inequities in communities across the country.

When Kenny Choi jumped into the backseat, he never thought he would be introducing his ride share driver to National Public Radio. The hour-long ride to the airport turned into a conversation that included politics, the economic divide, and the cultural differences between the East Coast and the West Coast.

Sickle cell patients being ‘treated like drug users’ in A&E