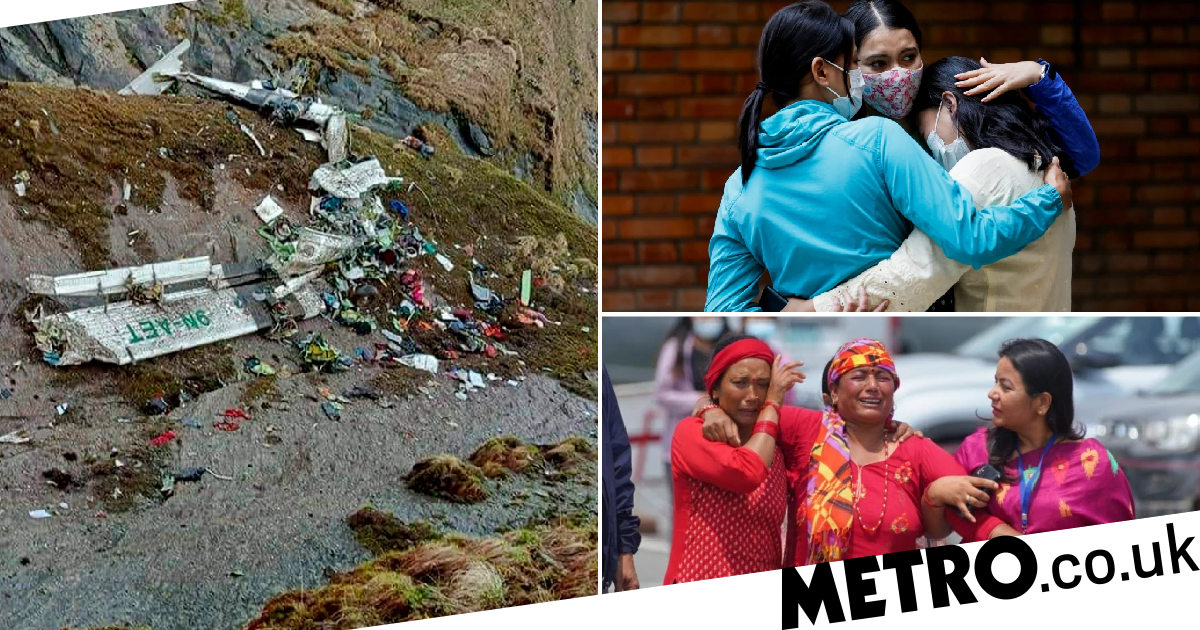 There are no survivors after a plane carrying 22 people crashed in the Nepal mountains on Sunday.

The tragic announcement was made this afternoon after all bodies were recovered.

The cockpit voice recorder, known as the black box, has also been found in the wreckage in Sanosware, the Mustang district.

It followed 48 hours of dread for heartbroken families waiting for news at Kathmandu airport.

Rescuers confirmed last night they had found all but one person, and warned they did not expect to find them alive.

Speaking on Monday, Maniram Pokhrel, father of the plane’s co-pilot Utsav Pokhrel, 25, said with a choking voice in Kathmandu: ‘I am waiting for my son’s body.’

Four Indians, two Germans and 16 Nepali people were on board the plane.

Local news reports suggested this included two Nepali families – one with four members and the other with seven – and three Nepali crew members.

The two Germans were a man and a woman from the western state of Hesse, German news agency dpa reports.

A spokesperson for the Hesse state interior ministry said: ‘On the part of the Hessian police, relatives have already been informed and care measures initiated.’

A picture of the wreckage released yesterday showed pieces of the plane scattered across rocks and moss on the side of a mountain gorge.

The 43-year-old Tara Air turboprop Twin Otter was only supposed to be in the air for 20 minutes as it flew from Pokhara to the mountain town of Jomsom.

According to tracking data from flightradar24.com, it took off from Pokhara at 9.55am and transmitted its last signal at 10.07am at an altitude of 12,825 feet.

Local villagers launched a search for it at the weekend, but were only able to reach the site on Monday morning after following the smell of fuel, according to the Setopati news website.

Production of The Twin Otter, a plane originally built by Canadian aircraft manufacturer De Havilland, initially ended in the 1980s.

But another Canadian company, Viking Air, brought the model back into production in 2010.

It is prized for its durability and its ability to take off and land on short runways.

Nepal, which boasts some of the world’s highest mountains including the famed Everest, has a history of aviation accidents.

In 2016, a Tara Air Twin Otter flying the same route crashed after take-off, killing all 23 people aboard.

In 2014, a Nepal Airlines plane flying from Pokhara to Jumla crashed, killing all 18 onboard.

In 2018, a US-Bangla passenger plane from Bangladesh crashed on landing in Kathmandu, killing 49 of the 71 people aboard.