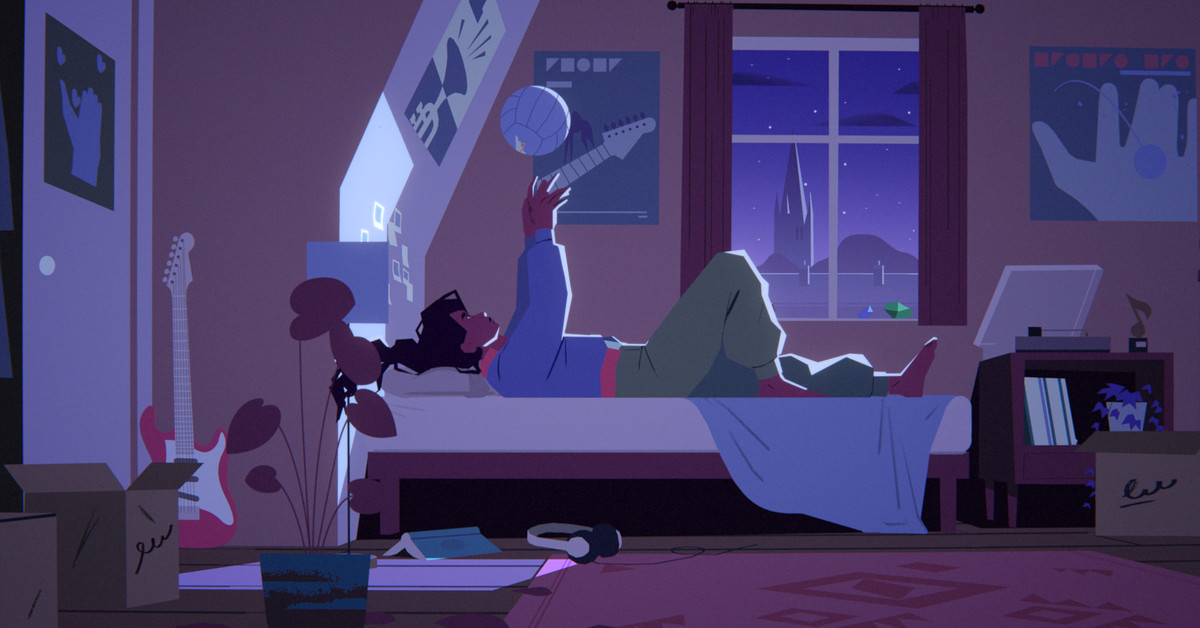 The quality of Netflix games has gone from simple, cotton candy-like fluff suitable for short bursts in a waiting room to bespoke, narrative experiences that require hours of strategic thinking. Desta: The Memories Between is the latter.

Now I’m going to say some words that make sense independently but seem confusing when smashed together: Desta is a dreaming dodgeball roguelike friendship simulator. I promise you, it works.

That’s the thing that enamored me of this game: those disparate words and genres, when put together, frickin’ work on a level that I simply have not seen in a mobile game, let alone one brought exclusively to mobile via Netflix — whose first crop of games included such BAFTA hopefuls like Shooting Hoops and Teeter (Up). (Desta’s also coming soon to PC and consoles but will only be available on mobile to Netflix subscribers.) I enjoyed the hell out of my time with the game, going as far as annoying my boss because I spent far too much time playing it when I should have been writing about it — sorry.

Desta: The Memories Between is from Ustwo Games, makers of Monument Valley I and II. It stars Desta, a prodigal child returning home after years away to the relationships they left in various states of disrepair and abandonment. As Desta struggles with their unfinished business in the waking world, they confront their anxieties in dreams via a fantastical childhood game of dodgeball.

I’ve been desperate for a strategy game since Triangle Strategy left me cold and Nintendo utterly refuses to release the reboots of Advance Wars I and II. Desta, while not exactly being a strategy RPG on that same level of complexity, nicely — albeit temporarily — scratches that itch. You’re given a ball and field filled with obstacles that obstruct line of sight while providing cover. Your job is to pelt your enemies with the ball, whittling away their HP one box at a time while avoiding the same fate.

Combat in Desta is too much fun. Playing as Desta, I slung the ball around the field, performing trick shots, ricocheting the balls off walls and other objects. The physics in the game are remarkably complex. I remember squealing in delight when I discovered that if I angled my shots just right, the ball would return to me, enabling me to make another shot without needing to root around the field for the nearest ball. The abilities in Desta add an additional layer of complexity, elevating combat from throwing balls around into full-blown strategic showdowns.

At the beginning of a run, Desta can get one of any number of special abilities — shields when ending a turn with a ball in hand, the ability to steal an opponent’s turn, or health on successful hits. My favorite was the one that lets Desta slingshot to places in their line of sight, allowing me to get behind enemies that annoyingly craft barriers in front of them, blocking my balls.

As Desta confronts their friends in dreams, once they defeat them in dodgeball duels, they become party members making combat even harder and more satisfying with more powerful enemies. Before each battle, I could see the field and enemies before choosing which of my friends to bring with me based on their individual abilities. It’s so fun crafting the right teams for each engagement.

But then, suddenly, like startling awake from a pleasant dream, I was forced to abandon the game. Desta is structured somewhat like a roguelike, and defeat is extremely punishing — you lose all your accumulated abilities, items, and allies and are sent back to the first chapter to begin again. The first couple of times, that was fine. Desta keeps their personal progress, so your HP total isn’t reset. And although the abilities you earn are randomly doled out, any experience points invested in them carry over, and once you master them, they remain yours even upon death. But resetting in Desta, unlike in other roguelikes, doesn’t make combat faster, resulting in punishing slogs that, all too soon, begin to feel like wasted time.

In Hades, for example, the progress you invest in yourself and your weapons makes those first few levels breeze by. Everything dies in one hit, making the lower levels of hell simple affairs. In Desta, even if you’ve managed to max out one or two abilities to keep with you, the balls you throw don’t deal more than one point of damage, and enemies, even the lowest level ones, have three and four hit points. Worse than that, each chapter consists of several encounters, all of which you have to repeat with no option to unlock a midway point. Even Returnal — as much of a difficult bastard that game was — lets you restart from the last defeated boss when you die.

To call upon Hades again, the multiple cycles of death and restart didn’t feel too bad because, narratively, the game still progressed. In Desta, some of that repetitiveness is similarly baked into the narrative, but not enough to keep multiple runs from feeling stale. You repeat the same dialogue you have with your friends every time you fight them. I began to feel like a hamster on a wheel, or, more accurately, like Dr. Strange fighting Dormammu, and eventually, like the alien, I gave up in frustration.

And that was a shame because I wanted to see Desta’s journey. I appreciated Ustwo’s approach to their character, their friends, and the difficult themes of interpersonal relationships complicated by time and distance and identity. Desta is a nonbinary character with their pronouns front and center in the game’s UI, and so, too, with the game’s other characters. As the game progresses, Desta confronts a friend who hasn’t really gotten the message of Desta’s identity and frequently misgenders Desta. Ustwo rightly understood some players might be uncomfortable with such a plotline and added a setting that changes the misgendering dialogue. There was a lot of care taken in crafting Desta’s narrative; I wanted to see more of it, and I held on for as long as I could.

I had the opportunity to play bits of Desta: The Memories Between at Summer Game Fest. I vividly remember being amazed by such a technically impressive and fun game. Now, as it did then, Desta wowed me, and I look forward to the post-launch support the developers have pledged for the game, including a hard mode, new abilities, characters, and chapters. Desta makes a strong case for Netflix as a viable mobile gaming platform — it’s time to start paying attention.

Desta: The Memories Between is out now on mobile for Netflix subscribers and is coming soon to PC and consoles.