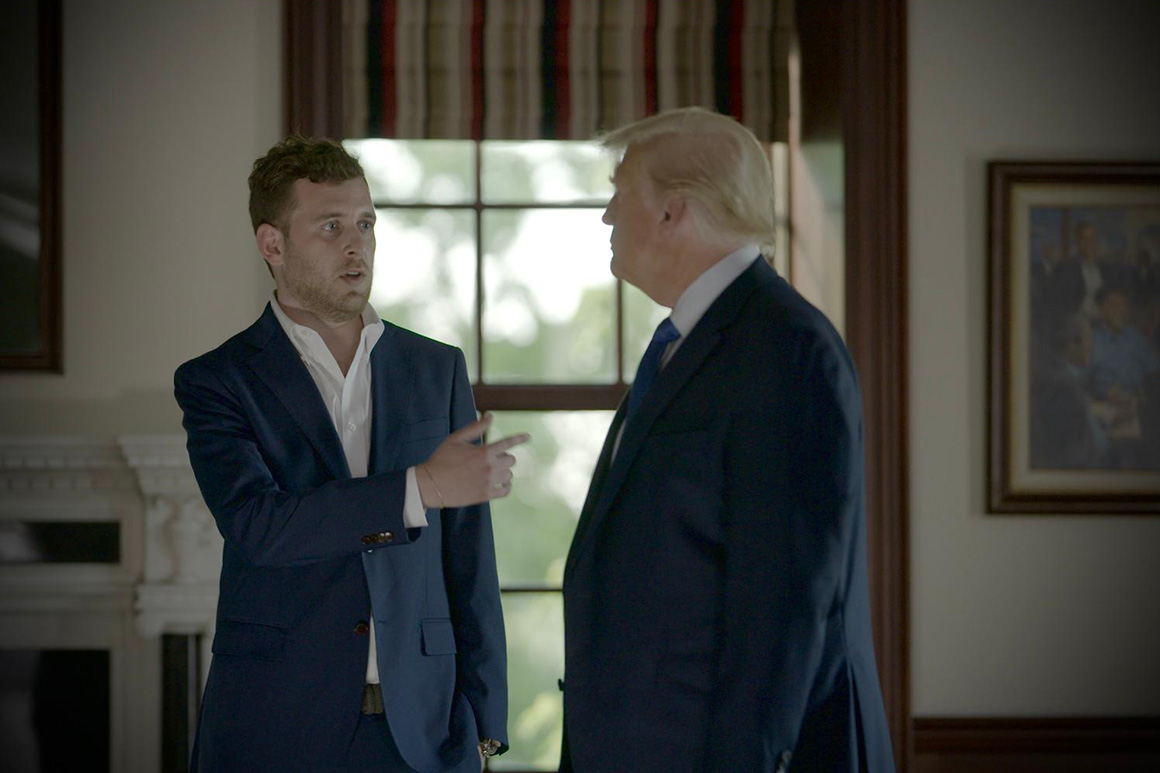 Ryan Lizza: Did you consider resisting the subpoena because, as a journalist… Look, I have an interview with Donald Trump in Mar-a-Lago from after January 6 that’s unpublished. And if the January 6 committee came asking for that, there’d be a lot of questions I would have, and I think our attorneys at POLITICO would have. There are tons of books that have been written about Donald Trump with transcripts and audio recordings of interviews that have not been turned over to that committee. The committee hasn’t subpoenaed, for instance, Bob Costa and Bob Woodward, right? Or Susan [Glasser] and Peter [Baker] for their book or any of the other journalists who have these long interviews with the president and his family. Did it raise concerns for you on a First Amendment or journalistic level of “Wait a second. I’m not sure that I should hand this stuff over”?

Alex Holder: In terms of my position, I think the idea of us not wanting to comply with one of the biggest political investigations of all time would have caused quite a lot of complications in terms of what the series is and what the project was. I mean, to me the events of January 6, which is really what this investigation is all about, is it was a terrible day for America. Obviously we were there on that day and people died and were injured. And it’s something that needs to obviously never happen again.

There’s sort of a responsibility and a sense of… The idea of saying no, in that context, sort of made me feel uncomfortable, especially as I’m not an American and the access that we had was unique. And so there was a sort of a perspective that — and I’m not even sure we would have been particularly successful in even resisting that — and to me, the idea of resisting it just didn’t make any sense.

Lizza: So it sounds like you felt in a sense that it was your duty to help the committee put together the most comprehensive record that they could? And you had something that could fill in some pieces, so you should turn it over?

Holder: Yeah. It’s sort of like saying that the series comes out and then an investigation takes place afterwards. Like, would I resent the fact that an inquiry was using a finished and publicly released documentary for that investigation? No. At the end of the day, they have the power to ask for it. We complied with it.

Lizza: I think I read somewhere that one of the things that weighed on you was that you saw some contradictions between what was said to the committee and what you recorded.

Holder: I’m not a lawyer, right. And I’m not a politician. I just document the facts and the history. In Ivanka’s interview to me, it wasn’t at all surprising when she said that the family have always, at least in my interactions with them, been very supportive of their father. They love him very much. They admire him. Eric Trump calls his father his best friend. And so the idea that Ivanka would sort of echo some of her father’s thoughts was not surprising at all. When she gave her testimony to the investigation, there was a difference in what she had said to me and it will be for others to determine whether there was a difference, whether that difference is material. But, it is what it is.

Lizza: This was when she talked about Bill Barr saying the fraud allegations were all bullshit and that weighed on her because she respected Barr? That’s what she said to the committee.

Holder: I think it was with respect to being asked a question about whether she accepted Bill Barr’s statement to AP, where he said that the Department of Justice had concluded that there was no electoral fraud. She said that she had accepted that position.

Lizza: Because she respected him. Right. Because AP wasn’t his testimony, it was something he said to the press back in December.

Holder: Exactly. Exactly. And then what Ivanka said to me during the interview was different in that, it seems.

Lizza: Just tell us what she told you generally that sort of seems to contradict what she said to the committee.

Holder: Well effectively, she echoed her father’s position on the election, which clearly was not what Bill Barr said to AP.

Lizza: What’s the most surprising thing that you learned making this movie that you didn’t understand about Trump and his family before you went into the project? The thing that shattered your expectations about them?

Holder: I think one of the things that was surprising was that they are quite real in a sense that they didn’t wish to show. So for some reason they didn’t want to show the fact that they’re actually really real people and they have sort of anxieties and they have concerns and they love people and they dislike people and they have sort of interesting relationships with each other. They have stories and anecdotes and all sorts of different things that they never really came out with during the time that they were — well, I say “they,” but their father was — in power. I wonder whether or not that was sort of on purpose or…I mean, I don’t know. But I think that what I learned was that there is something underneath that hasn’t really been explored properly before. And I think that was quite unique.

Lizza: It sounds like the way you’re describing it — and this can get journalists who cover Trump and his family into trouble sometimes with a certain segment of our very polarized electorate — but it sounds like a sympathetic portrayal. It sounds like you are humanizing them in a way that you haven’t seen before, if I’m reading it properly. I don’t mean that at all as a criticism.

Holder: No, no, not at all. I mean, when people say the words “I’ve humanized them,” I don’t think I did anything. I think that it’s a fact.

Lizza: Well, they are humans.

Holder: Exactly. Exactly. They are humans. So that’s what I think we capture. We sort of show that they are human. And that doesn’t imply sort of a sense of… What was the word you used before? A sense of us being forgiving or…

Holder: Exactly. I think the portrayal is an authentic portrayal, a portrayal where you see them being who they really are. They gave as much as they wanted to give.

Holder: To me. And we put in as much as we could put in to show that. I’ll give an example. One scene in the first episode of the series, I ask Ivanka what her first memory is of her father. She sort of thinks about it and she goes he used to sing to her when she was a child and no one knew about it until her mother caught him on the baby monitor. In the episode, I show that clip of Ivanka saying that to her father and we see his reaction to that particular message. And it’s a very interesting moment. It’s a moment where he shows…I don’t want to ruin it because he says something quite funny and shows off a humor to him, which I had never seen before. You also see a sense of pride in his kids as I show him other clips as well of what we had captured over the course of the project. So you get to see a side to him which I think is normally quite hidden.

God Of War: Ragnarök leaker teases something in binary

Democrat Tim Ryan fundraises in Hollywood after claiming J.D. Vance is ‘not…

Major review of vaping finds age-group at ‘greatest risk of…

Discrimination in cricket DCMS hearing to take place in…