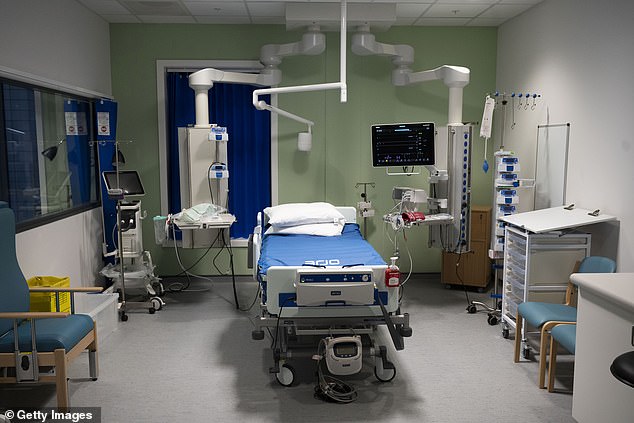 NHS needs 13,000 extra beds: Major shortage is putting lives at risk by slowing the rate at which patients can be taken in for treatment, report says

By Shaun Wooller Health Correspondent For The Daily Mail

A major shortage is putting lives at risk by slowing the rate at which patients can be picked up, admitted to hospital and treated.

The UK has lost almost 25,000 beds since 2010/11 and is now lagging behind most of Europe, according to the Royal College of Emergency Medicine’s ‘Beds in the NHS’ report.

A major shortage in beds is putting lives at risk by slowing the rate at which patients can be picked up, admitted to hospital and treated

This has led to a ‘patient safety crisis’ by fuelling a sharp rise in A&E waiting times, ambulance handover delays and cancelled operations, it adds. It has also led to slower 999 response times and unsafe bed occupancy levels.

Dr Adrian Boyle, the college’s vice president, said that the NHS needs 13,000 more beds and extra staff to supervise them if there is to be ‘actual change and meaningful improvement’. He added: ‘The situation is dire and demands meaningful action. Ultimately, there are widespread staffing shortages leading to a shortage of staffed beds.’

The latest NHS data shows a record 24,138 people in England were left languishing on A&E trolleys for more than 12 hours in April after doctors decided they should be admitted to a bed.

And only 72.3 per cent of A&E patients were seen within the target four hours last month – the second worst rate in records going back to November 2010.

Meanwhile, the average response time for ambulances dealing with the most urgent, life-threatening incidents was nine minutes and two seconds, well above the seven minute target. Dr Boyle said: ‘These numbers should shock all health and political leaders.

‘The health service is not functioning as it should and the Government must take the steps to prevent further deterioration.’

The NHS Confederation said a fully-funded, long-term plan for the health and social care workforce was needed as well as immediately investing more cash into social care to make sure patients medically fit for discharge can be cared for in the community.

Rory Deighton, acute lead at the NHS Confederation, said: ‘It is only with these additional measures that the NHS can operate as a sustainable system that can move through the elective backlog as efficiently as possible.’

Earlier this month it emerged that a patient was forced to wait in an ambulance outside A&E for 24 hours before being handed over to doctors. Ambulance crews should be able to drop off patients and be ready to respond to new 999 calls within 15 minutes.

A Department of Health and Social Care spokesperson said: ‘We recognise the pressure on urgent and emergency care services and we have set out our plan to help tackle the Covid backlog, backed by record investment.

‘There are record numbers of doctors, nurses and overall staff working in the NHS, and we have commissioned NHSE to develop a long-term workforce strategy.

‘The NHS is taking a range of actions – including providing an additional £50 million of funding to support increased NHS 111 call-taking capacity this year – to help people access urgent care when they need it.’