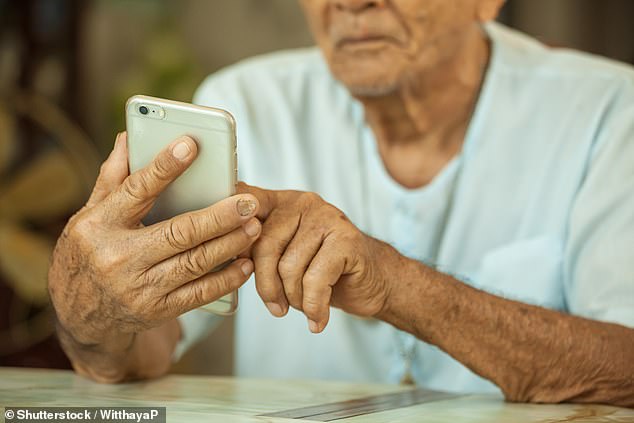 Patients are being prescribed smartphones and given technology training on the NHS in a bid to free up hospital beds.

NHS England has set the target of creating an additional 25,000 ‘beds’ by 2024 by expanding the use of ‘virtual wards’ to treat more people at home.

The wards are designed for patients who need care but do not necessarily need to be in hospital.

NHS chiefs said patients on some pilot schemes were already being loaned mobile phones and given lessons to help them become tech-savvy. For people who do not have access to Wi-Fi, trusts are providing them with devices that have access to 4G.

Dr Sarah Sibley, who runs virtual wards in Merseyside, claimed one ‘barrier’ was that many vulnerable people — particularly the elderly — do not have access to the right technology.

She added: ‘And we work in areas with lots of social deprivation, people don’t have access to technological devices or data to be able to upload information.’

Tara Donnelly, director of digital care models at NHS England, said other trusts have struck deals with companies like Vodafone to lend patients phones and tablets.

Virtual wards have existed for years but became prominent during the pandemic, when patients were monitored from a far to preserve capacity and avoid hospital outbreaks.

A £160million NHS cash injection in 2021 was used to fund several non-Covid trials of virtual wards, with the aim of freeing up more beds to clear the backlog of elective care.

Around 5,000 patients are now being treated at more than 50 virtual NHS wards across England.

Patients on the wards are monitored by consultant or GPs via daily phone calls or chats on mobile apps.

In some cases, patients will be provided with a wearable device to continuously monitor and report their vital signs.

The number of people waiting for routine hospital treatment in England has skyrocketed to another record high, official figures show.

As the NHS crisis deepens, one in nine people (6.48million) were queuing for elective operations such as hip and knee replacements and cataracts surgery by April — up from the 6.36m stuck in March.

Meanwhile, 12,735 have been stuck on the list since before Covid reached Britain in early 2020, down by a quarter.

Health Secretary Sajid Javid has promised to axe all one-year-plus waits to zero by 2025, utilising the 1.25 per cent National Insurance hike which will raise the health service a extra £30billion over the next three years.

Despite the Covid-induced backlog worsening yet again, response times in A&E and for ambulances have actually improved slightly.

More than 19,000 patients attending casualty units were still forced to wait 12 hours or more to be given a bed, in conditions described by experts as ‘inhumane’. This was down by a fifth on the previous month — but emergency medics say NHS England figures are a ‘gross under-representation’ of the actual crisis.

Dr Sibley, who is also a respiratory consultant at Liverpool Heart and Chest Hospital, said ‘things worked really well during Covid from a technological perspective’.

But the technology had been more ‘difficult’ to implement for traditional diseases – often suffered by old or vulnerable people.

She added: ‘So we had to come up with a suite of options, which included using an app on a device if they have one.

‘If they didn’t have a device at the time we could provide them with a smart phone to use for the duration of the time they were on the virtual ward.

‘And we have telephone options… and devices that are easier to use and have less options available.

‘But one of the things we found was, some people don’t know how to use technology.’ She said these patients were also offered tech training.

Dr Sibley made the comments to health service leaders today at an annual NHS conference in Liverpool during a presentation called ‘Delivering virtual wards: top tips for success’.

An extra up to £450million will be available to support the creation of the wards, according to NHS England operational planning guidance.

They are currently being used for people with respiratory infections, heart disease, chronic obstructive pulmonary disease and those with frailty.

People can either be added to the virtual ward list as they leave hospital to return home or be ‘admitted’ from the community.

Making the case for virtual wards, Ms Donnelly said: ‘If you are acutely unwell there is no better place to be than hospital.

‘But once you are past that immediate, acute need, home has enormous advantages.

‘You can sleep and rest more easily, you can mobilise effectively, eat the food you want to eat and have your support network and loved ones around you – all of which boosts recovery and supports morale enormously.’

There are some within the NHS who want to refer to them as ‘home hospitals’ due to concerns that ‘virtual’ ward carries negative connotations.

Elliot Howard-Jones, the boss of Hertfordshire Community NHS Trust, which runs virtual wards for heart and lung patients, said he prefers the term ‘hospital at home’.

He said the word virtual ‘degrades the absolute benefit’ of the wards and likened it to being offered ‘a virtual tenner or a real tenner’.

It comes amid an ongoing row about virtual GP appointments.

Paul Pogba says he wants to show Man United ‘made a mistake’ and calls reported £300,000-a-week offer ‘nothing’

Kohlman: Creamy leek and bacon pasta is so simple and so good