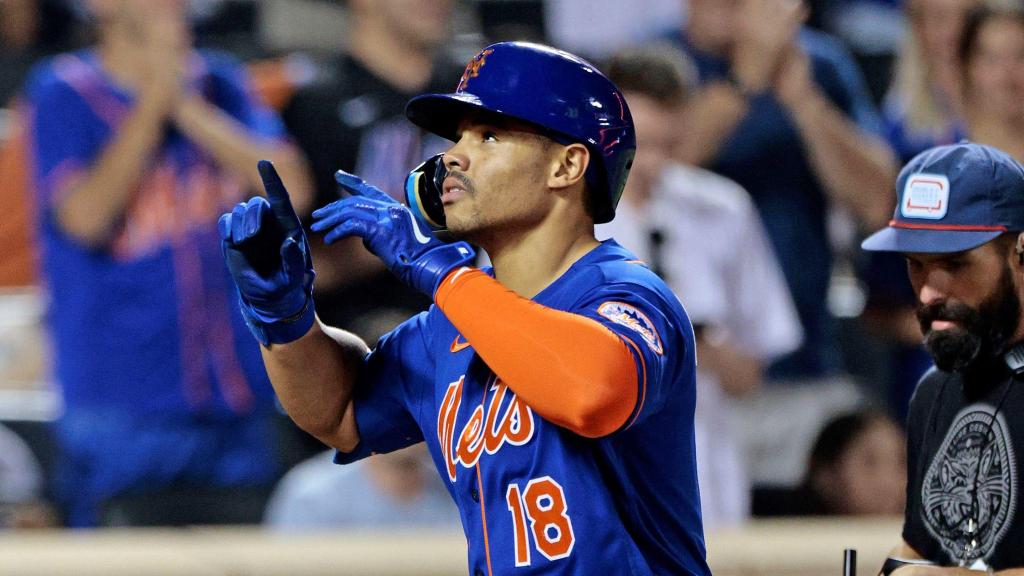 Mets rookie Nick Plummer’s first two starts in the big leagues produced the type of statistics that people like to categorize as video game numbers.

In this case, if you were playing with Plummer in a video game, you might think about increasing the difficulty level.

Plummer was in his first starting lineup for the Mets on Sunday against the Phillies and then again on Monday against the Nationals. He went 4-for-8 (.500) with two home runs, a double and five RBI. The Mets also won both games, in large part, because of Plummer. His first sepia-toned MLB memory will always be the game-tying homer into the second deck off Phillies’ closer Corey Knebel in the bottom of the ninth inning. The 112.8 mile per hour rocket was the hardest hit ball of the night by either team, and with a national ESPN audience tuned in, Plummer’s first start in Major League Baseball was downright improbable.

Not many rookies get a Sunday Night Baseball moment like that, and even fewer get to hear a Big Apple crowd chant their name like Plummer did as his hot streak blazed through Monday night’s game.

“It’s awesome,” Plummer said of the fans’ appreciation. “Francisco [Lindor] made sure I turned around. It was pretty much every inning, sometimes two times an inning. This is what you envision.”

Plummer said after Monday’s game that he zones out when he’s on the field. The shortstop with the evergreen smile made sure that the new kid on the block took some time to soak it all in and remember to have fun.

“I get pretty straight faced when I get in between the lines,” Plummer admitted. “He made sure that I made light of it. Ultimately, we’re here for the fans. Without them, we kind of don’t have jobs.”

Plummer, a first-round pick by St. Louis in 2015 out of Brother Rice High School in Bloomfield Hills, MI, DJ LeMahieu’s alma mater, has spent his entire adult life in professional baseball. After seven years and five baseball seasons in the Cardinals’ system — he missed all of 2016 after hand surgery, and the pandemic shut down minor league ball entirely in 2020 — Plummer was granted free agency in November 2021.

After beginning his career with horrendous struggles in the lower levels, he finally reached Triple-A in 2021. Plummer posted a .267/.455/.440 slash line in 27 games for the Cards’ Triple-A affiliate, but it wasn’t enough for St. Louis to keep him around. The Mets swooped him up on a one-year deal — his first ever major league contract — and after he went 1-for-7 in spring training, the organization had him start the year at Triple-A Syracuse. Some prodigious power emerged there, as Plummer walloped six homers in 24 games before getting the call.

As is typically the case, Plummer’s first start in the big leagues was predicated by someone getting hurt. When fan favorite Travis Jankowski fractured a bone in his hand, the Mets needed someone to fill their fourth outfielder role. But then Brandon Nimmo sprained his right wrist, and while he’s been able to avoid the injured list so far, he’s also been tethered to the bench.

That gave Plummer the opportunity to not only start the Mets’ last two games, but also become the first player in club history with multiple home runs after just two starts.

“We had some guys go down, guys who are going to be on the mend,” Plummer acknowledged. “It’s passing the baton and just moving the line.”

Once upon a time, Baseball America ranked Plummer as the eighth-best prospect in the Cardinals’ system. The Midwestern kid made 1,819 plate appearances as a Cardinal minor leaguer but never got to wear the iconic birds-on-the-bat uniform in the majors. In 2015, the recently-drafted high schooler never would have told you that he’d end up on the Mets, and even in his wildest dreams, he couldn’t have imagined the last two nights he’s had at Citi Field.

“You don’t draw it up,” Plummer gushed. “You really don’t. Maybe when you’re younger you think about hitting a grand slam, down by three in the bottom of the ninth inning. But to actually be here — I’m just trying to play good defense, play behind my guys and put together really good at-bats — trying to keep it simple.”

Hilariously, one of the simplest parts of a hitter’s game, a single, eluded Plummer as he laid waste to the ball on Sunday and Monday. The clutch homer on Sunday preceded an RBI double and another homer in his first two at-bats on Monday. Only after he familiarized himself with extra base hits did Plummer record his first MLB single, a classic line drive into center field off Nats’ hurler Paolo Espino.

Plummer was asked after the game if he was disappointed that he had to settle for a single after racking up exclusively doubles and round trippers.

The Mets will gladly take whatever hits they can get from Plummer. No matter what happens down the road, the baby-faced 25-year-old has ownership of a few pages in the team’s 2022 story.