No, this photo doesn’t show an American admiral captured by Russians in Mariupol 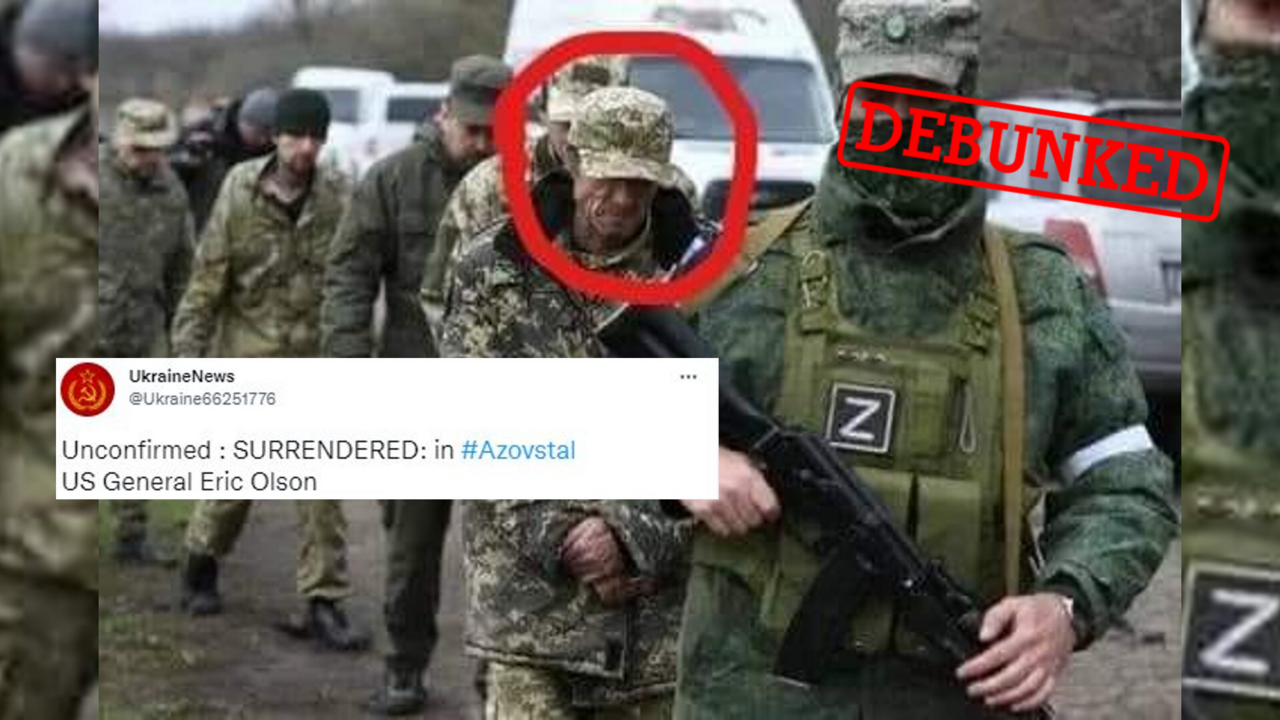 On May 14, pro-Russia social media accounts started circulating a photo of a group of soldiers taken prisoner by the Russian army. These accounts claimed that one of the prisoners in the photo is a retired American admiral by the name of Eric Olson. That claim is false: this photo actually shows Ukrainians taken prisoner by the Russians in April 2022, well before the soldiers in the steelworks surrendered.

If you only have a minute

The fact-check in detail

In the photo, an armed soldier wearing the letter “Z” – a symbol of support for the Russian invasion of Ukraine – stands in front of at least seven unarmed men wearing camouflage, thought to be prisoners of war.

Eric Olson is a retired admiral with the United States Navy who served as the head of the United States Special Operations Command. Another pro-Russian Twitter account, which shares posts in Spanish, also tweeted this photo on May 14.

In this image, posted on Facebook on May 17, the face of the first prisoner is circled in red, suggesting that the man is Eric Olson.

A photo of prisoners in Luhansk, not Mariupol

Our team ran the photo of the prisoners through a reverse image search (check out how by following this link). We found that the photo was featured in an article entitled “‘We won’t forget, we won’t forgive!’ The memory of victims of the Ukrainian aggression was honoured in the LPR [Luhansk People’s Republic]” that was published by Russian state media outlet Ria Novosti on April 14, 2022.

The article is about a ceremony that took place on April 14, 2022 in Luhansk in honour of the victims of fighting between pro-Russian separatists and the Ukrainian Army in 2014, which Ria Novosti referred to as the “Ukrainian bombing”.

“Ukrainian prisoners were also brought to the event – fighters from the National Guards,” reads the caption on the image.

The photo also appears in an article by the Russian media outlet Sputnik. Because of restrictions, you can’t access Sputnik from the European Union, but you can see a screen grab of the article taken by the American fact checking website Lead Stories.

Sputnik reported that the image was taken April 14 and it shows “Ukrainian prisoners of war attend[ing] an event in memory of those killed in Luhansk People’s Republic as a result of shelling in 2014, in Luhansk, LPR.”

No photo showing the arrest of Eric Olson has been shared by the media, even Russian media.

The evacuation of Ukrainian soldiers from the Azovstal steelworks was announced by Ukrainian authorities on May 16, 2022, a month after this photo was taken.

Admiral Eric Olson retired from the American armed forces in 2011, according to the Joint Chiefs of Staff website. The US Department of Defense also confirmed to our team that Eric Olson is retired.

While it is, of course, possible, if unlikely, that retired Admiral Eric Olson did travel to Ukraine, this photo does not show Olson being captured in Mariupol.