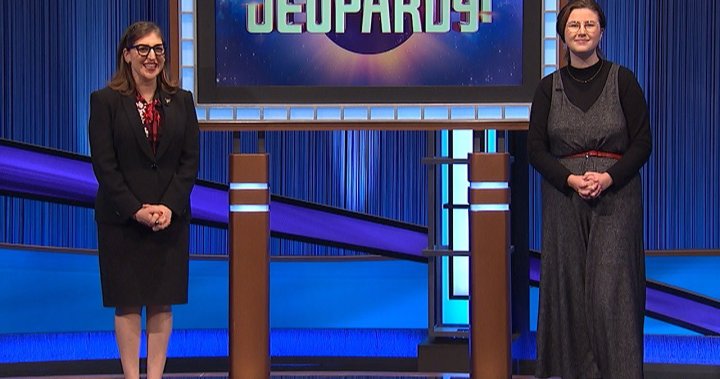 Who is Mattea Roach? A three-day Jeopardy! champion, that’s who.

The Canadian contestant won $9,599 on Thursday night’s show, bringing her total winnings to $80,400.

While Roach answered the Final Jeopardy! round clue incorrectly, so did the other two contestants.

At the top of the show, her previous night’s feat of answering 36 correct responses prompted host Mayim Bialik to call it “champion caliber” and a dominating performance.”

During the contestant interview portion, Roach was careful to mention she hailed from Halifax because her “family thought it was very important,” as well as offered a shout-out to Calgary and Moncton where she’s also lived.

Roach is originally from Nova Scotia, but moved to Toronto six years ago. Now, she has family, friends and fans cheering her on from coast to coast.

In what I can only call a display of “extreme Cape Breton behavior,” my mom’s cousin put this up at the grocery store he and my great aunt/uncle run in Marion Bridge – feeling so incredibly supported!! Two more days ✨ pic.twitter.com/bORqgiOuvp

During an interview with Global’s The Morning Show, Roach said she’s watched Jeopardy! since she was a child — although she admitted Wheel of Fortune was her favourite.

And it turns out, if it wasn’t for the COVID-19 pandemic, Roach may never had ended up on the game show.

“I applied during the pandemic. I was, like many people my age, spending a bit more time at my parents’ house than I really expected to,” she said.

“And I was bored and I thought, ‘You know what? Why not shoot my shot?’”

So, she went online and began the audition process by taking a test.

Roach will be back on Friday’s episode as the returning champion.  She has already said she plans to use her winnings to pay off her student loans.

Ketanji Brown Jackson’s Supreme Court confirmation, and what comes next

Twitter downloads up in China but spam overwhelms searches…