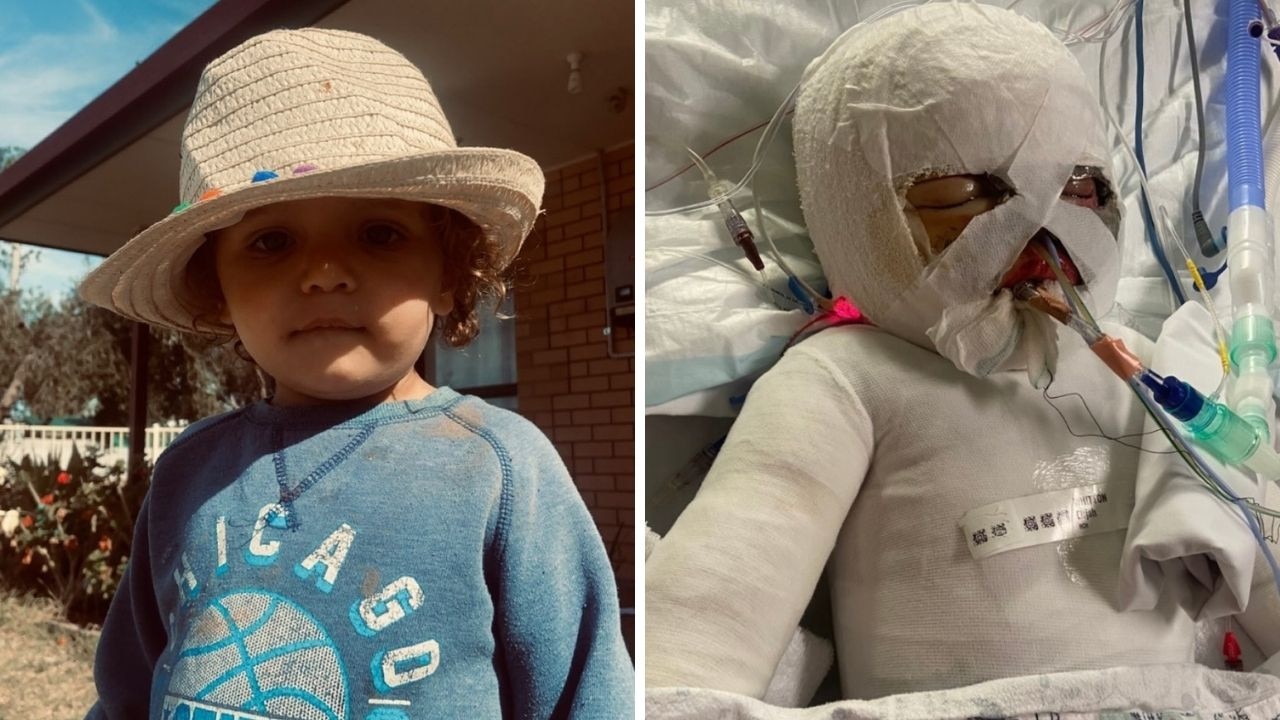 A two-year-old boy has suffered third-degree burns to almost half his body after he became trapped when a laundry appliance sparked a fire.

A two-year-old boy is recovering “incredibly well” after he suffered severe burns to almost half his body in a house fire.

Elijah Whitton was flown to The Royal Children’s Hospital in Melbourne in a critical condition on May 1 after his family home on the NSW-Victoria border was engulfed in flames.

The boy was trapped inside the Mildua home when a fire was believed to have been sparked by the family’s clothes dryer in the laundry, leaving him suffering third-degree burns to 42 per cent of his body.

The “energetic and loving” two-year-old was in a critical condition when he was pulled from the home by frantic family members.

His sister Alyia Whitton has since started a GoFundMe to help the family cover mounting medical bills.

She said her little brother was put into an induce coma the night he was flown to hospital and was immediately rushed in a wound debridement – a procedure that removes dead skin from burn areas.

“He has undergone several surgeries/procedures to stabilise him since then,” she explained on the charity page.

“[It] will be an ongoing process for several months.”

So far Australians have dug deep for young Elijah, raising just over $30,000.

In an updated post shared by Alyia on Tuesday, she said the boy was “recovering incredibly well”.

“Elijah came out from his third wound debridement surgery on the 12th of May. He has adapted well to the changes made,” she explained.

“Elijah had skin grafting to his face and to his lower body. His swelling has reduced and his skin has improved. His breathing tube has been removed and he is now breathing on his own. “Both of his eyes have opened.”

However, she said he is still getting used to the new changes and has been “a bit more agitated” since coming out of surgery, “which is expected”.

The two-year-old was due to undergo his fourth wound debridement on Thursday, but Alyia was thrilled with his progress.

“He is recovering incredibly well!!” she added.

“Thank you to everyone who has contributed to Elijah’s fight to recovery, words will never be able to summarise how grateful we are.”

Elijah was flown 566km to the Royal Children’s Hospital in Melbourne after the blaze destroyed the family home earlier this month.

Emergency services were called to the Ruby St property around 3.22pm on May 1 as fire engulfed the home.

Alyia and her 12-year-old brother Jacob Alassani were at home during the incident and alerted their mum after hearing an explosion.

The young boy was then pulled from the blaze by his mum with other family members and neighbours extinguishing the flames prior to the arrival of firefighters, the Herald Sun reported.

Alyia told Daily Mail Australia young Elijah’s left leg was still on fire when her mother pulled the trapped boy out of the house.

“Elijah’s left leg was still in flames when my mum put his leg out with water nearby,” she told the publication.

Police are investigating the cause of the fire but it’s believed the blaze started in a tumble dryer in the laundry with a jerry can full of petrol escalating it further.

Louise McSharry: For a standout pout, try these comfortable and long-lasting matte…