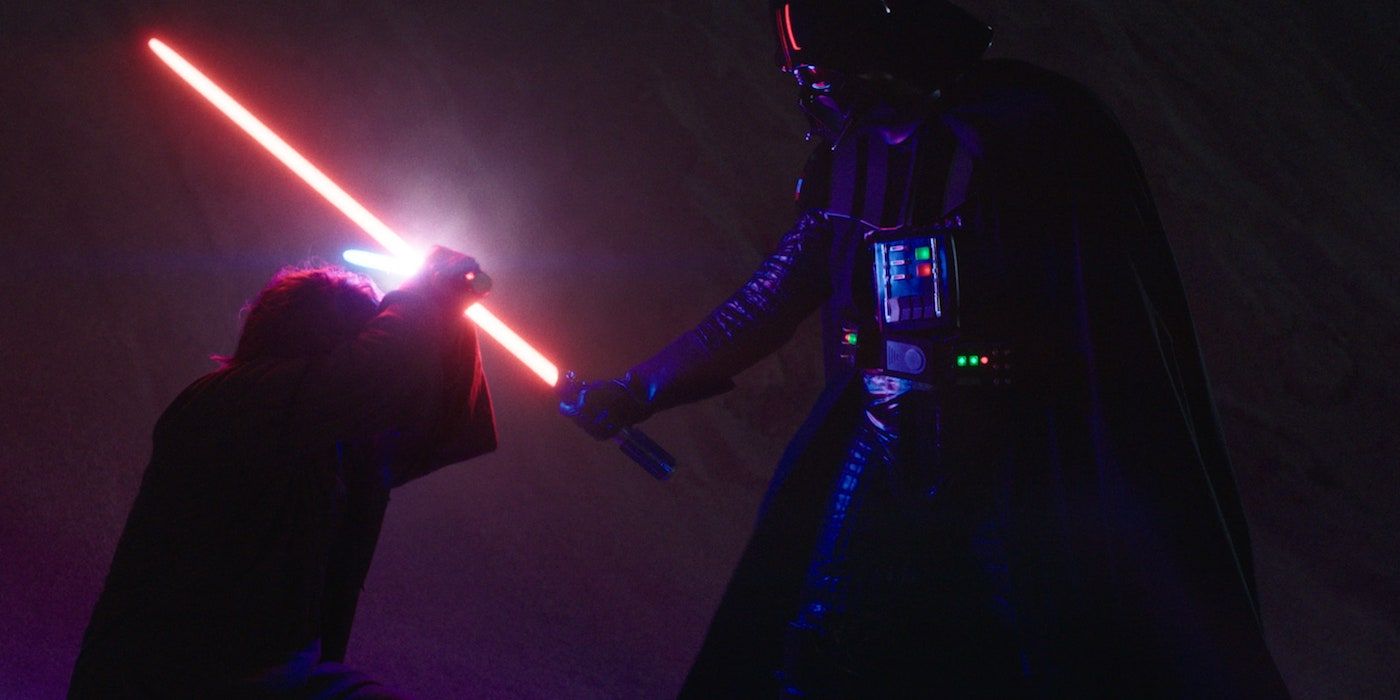 Obi-Wan Kenobi has worked hard to recontextualize many famous characters in the Star Wars universe, changing Obi-Wan’s and Leia’s journeys and fleshing out the story of the Fall of the Jedi Order. The Disney+ series also drastically altered — in a good way — Darth Vader’s arc and who fans thought he was. Vader is one of the greatest movie villains of all time, and Obi-Wan Kenobi proved that it’s for a good reason. The show makes him more terrifying than ever before, but also shows the audience why they should sympathize with him.

Vader (the Sith Lord formerly known as Anakin Skywalker) has been the driving force behind many stories in the Star Wars universe. Obi-Wan Kenobi fundamentally changed Vader from an imposing presence who could take down a hallway of Rebel troops to an incredibly powerful Sith who could tear a starship from the sky. At the same time, the series showed that behind the mask, he was still more man than machine.

In the original Star Wars trilogy, Darth Vader was scary. His presence, his breathing and his costume all added to the level of fear he brought to the screen. But as the universe began to expand, the Vader in those films began to feel lackluster. He was still an incredible character, but he was missing something. Disney took over and erased the Legends universe, and then Rogue One reminded everyone why Vader was terrifying. Watching him cut his way through a dozen Rebels was enough to re-establish him as a prime movie villain before the prequels showed him when he was still a Jedi.

Those films changed how people saw Vader by humanizing the person he was before he put on the suit. The rise and fall of Anakin was devastating. He wanted so badly to be the best Jedi and protect the people that he loved that it lead him to the dark side. Anakin and Obi-Wan’s relationship was the driving force of the prequels and also Obi-Wan Kenobi. Order 66 was horrific while leaving a lasting impact, and the duel on Mustafar proved Anakin was beyond saving.

The prequels gave context to why Luke was able to save his father and helped improve the recognition of Vader. Obi-Wan Kenobi took that one step further and finally showed Vader in his prime. After 10 years of hunting Jedi in a desperate attempt to find Kenobi, Vader got what he wanted. He struck out at Obi-Wan with all his anger and fury, particularly in “Part III,” proving that Darth Vader could still strike fear into the viewers and other characters in the Star Wars galaxy.

“Part V” delivered one of the most awe-inspiring moments when Vader ripped a starship out of the sky and tore it apart with the Force. He then proceeded to duel Reva without using his lightsaber. Reva had been waiting to kill Vader since she was a child, and he beat her with the Force, psychologically destroyed her with the truth, then stabbed her in the gut. He was heartless, cruel and without mercy. This scene demonstrated that Vader took anything he wanted, when he wanted. The episode’s flashback scenes further proved that Anakin was determined to win and to make Obi-Wan proud. He was too blinded by these desires to see that Obi-Wan was already proud.

But it was “Part VI” that truly highlighted the depths of Vader’s pain and suffering. Obi-Wan proved that Vader still wasn’t able to achieve victory by decimating him in their duel. As his helmet split open, Anakin’s face was revealed to Obi-Wan and he admitted that Obi-Wan didn’t kill Anakin — he did. Darth Vader is the embodiment of the darkness within Anakin. The good that exists within Anakin is what Luke saves, because Vader is a slave to the Empire who still serves a master. In “Part VI,” the Emperor beat him down with a few simple words, destroying what was left of his confidence and power.

Darth Vader has been on a long journey since 1977. He has captured the screen — both big and small — by constantly being a dominating villain. Obi-Wan Kenobi proved that Darth Vader was a master of evil. He had no room for mercy, for kindness or for Obi-Wan. But the series also proved that Anakin Skywalker still existed. Obi-Wan Kenobi affirmed that Vader should not only be feared for his might, but sympathized with for the depths of his misery, because he’s locked in a prison of his own making.

All six episodes of Obi-Wan Kenobi are now streaming on Disney+.

Jan. 6 Committee Members Get Heightened Security After Wave Of Threats

Irish girl, 7, fighting for life after being rescued from Majorca hotel pool on holiday with her family