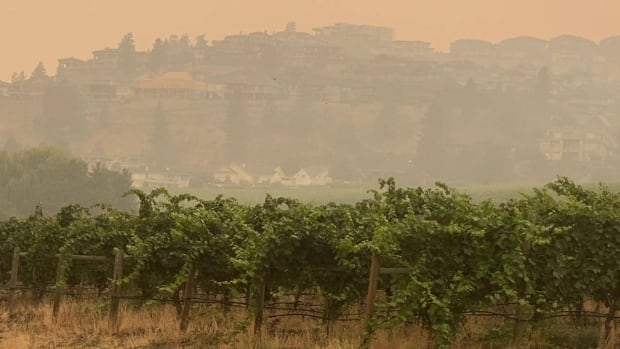 An Okanagan winery won’t be bottling its 2021 vintage due to smoke-damaged crops that resulted from last summer’s wildfires.

Blue Mountain Vineyard and Cellars, located in Okanagan Falls, announced its grapes were contaminated by smoke from the nearby Thomas Creek wildfire.

“We were not willing to compromise the reputation that we have worked tirelessly to establish over the past three decades,” wrote the winery.

While it has made the decision not to bottle the 2021 harvest, the winery said it has some inventory from previous years to last for “some months” and will decide whether it will remain open to the public in late spring.

It said the vines themselves were not damaged, and it looks forward to making wine again with its 2022 vintage.

Smoke taint is a concern that winemakers across the province have been dealing with for several years, said B.C. Wine Institute president Miles Prodan.

“No doubt, we’re worried about smoke taint and have been for a number of years,” Prodan said on CBC’s Daybreak South.

Prodan said contamination depends on a number of factors, including the intensity of the smoke, the vineyard’s proximity to smoke, whether ash has fallen on the grapes, the stage in the growing season, and the type of grape.

“There’s a number of variables in the process that make it pretty difficult to be proactive in preventing,” said Prodan.

Mitigation techniques include filtering the wine differently and regularly testing the juice from grapes to catch contamination early, according to Prodan. He said researchers in B.C. and in other wine growing regions across the world have been working on solutions.

However, Prodan said mitigation can be tricky because contamination does not usually show until the fermentation process.

“You can have what you think is clean juice. You go through the fermentation process, and then as you’re looking to bottle, you determine that it’s been impacted.”

Prodan said crop insurance does not cover smoke contamination. Once grapes have been processed and are no longer on the vine, they are no longer considered a crop.

Prodan has heard from other B.C. wineries that the quality of the rest of the 2021 yield was “fantastic.” However, he noted it was a short crop year due to the frost last spring and the summer’s heat dome.

Wine Growers British Columbia previously said yields were down between 15 and 30 per cent in the 2021 season.

“The quantity is down, but the quality is way up,” said Prodan.

Prodan said Blue Mountain’s decision to not bottle its 2021 vintage attests to winemakers’ dedication to quality.

“I think Blue Mountain’s decision just goes to show that no winemaker is going to put out a product that doesn’t match the level of quality they want.”

Three picks for the RBC Heritage including 100/1 shot