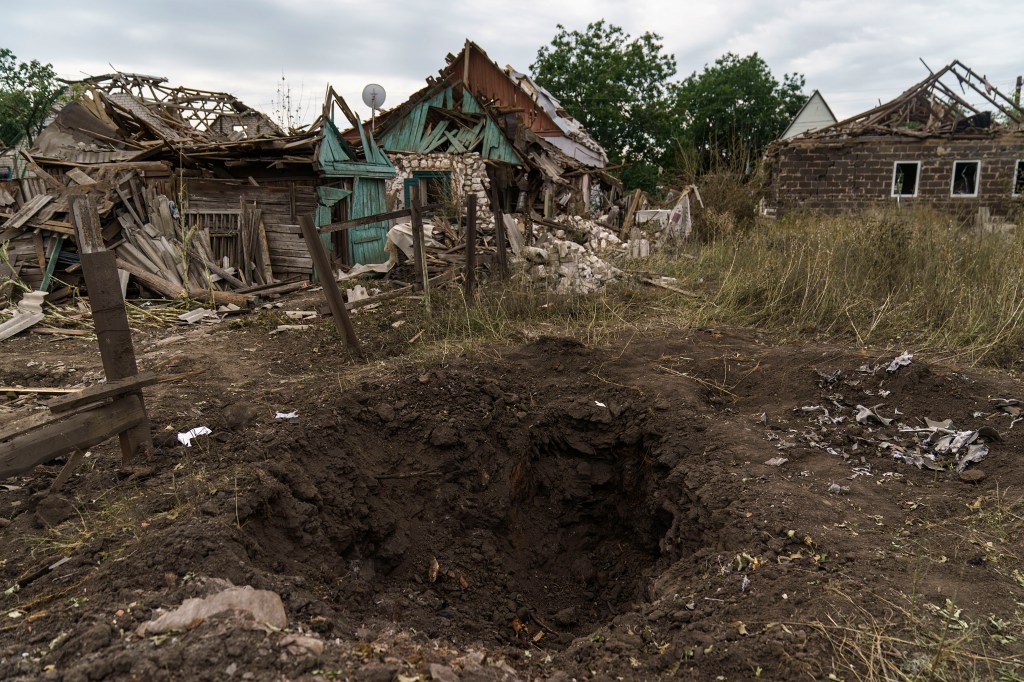 (Bloomberg) — Russia for the first time expressed guarded optimism about talks with the US on a prisoner exchange involving WNBA player Brittney Griner and another jailed American.

Ukraine was downgraded to default scores by both S&P Global Ratings and Fitch Ratings after the majority of the country’s bondholders agreed to defer debt payments for two years. Data on Friday showed Russia’s GDP shrank 4% in the second quarter, a decline that was less deep than feared.

Russia is gearing up for a prolonged war in Ukraine, according to the US-based analysts Institute for the Study of War. A new budget is reportedly on tap to boost industrial spending by some $10 billion.

(See RSAN on the Bloomberg Terminal for the Russian Sanctions Dashboard.)

Russia’s invasion of Ukraine is nearing the six-month mark, and its troops continue to concentrate on their bid to establish full control over Luhansk and Donetsk. The UK said two primary road bridges that provide access to Russian occupied territory on the west bank of the Dnipro River in the Kherson region are probably unusable now. Russian armed forces continued shelling in the vicinity of the strategic eastern cities of Slovyansk and Kramatorsk as well as other targets, the Ukrainian military said Saturday. Five civilians were killed and 35 injured in Donetsk region in the past 24 hours. That includes two who died and 13 wounded in a Russian strike in Kramatorsk, the governor of Donetsk, Pavlo Kyrylenko, said on Facebook.

The US expressed concern that an Indian company hid the origin of Russian oil, processed it and shipped some products to New York, according to a deputy governor of India’s central bank.

India was notified of the case by the US Treasury, Michael Patra, deputy governor in charge of monetary policy at the Reserve Bank of India, said at an event Saturday in Bhubaneswar, the capital of the eastern state of Odisha.

Russia expressed guarded optimism about talks with the US on a prisoner exchange involving WNBA player Brittney Griner and another jailed American.

“‘Quiet diplomacy’ is continuing, and it should bear fruit, if of course, Washington strictly follows it without slipping into propaganda,” a Russian foreign ministry spokesman told the state news service Tass.

US Secretary of State Antony Blinken and Russian Foreign Minister Sergei Lavrov said this month they’re willing to pursue the talks, a day after a Moscow court sentenced Griner to nine years in prison on drug charges.

Hungary is seeking to procure 700 million cubic meters of additional natural gas above the volumes set out in the country’s multi-year contract with Gazprom, to bolster its fuel reserves.

The Fulmar S, which a week ago was the first incoming grain vessel to a Ukrainian Black Sea port since Russia’s invasion in February, has departed, Turkey’s defense ministry said.

The Barbados-flagged ship is carrying 12,000 tons of corn to Ikskenderun in Turkey. The Marshall Islands-flagged Thoe also departed, transporting 3,000 tons of sunflower seeds to Tekirdag, Turkey. Both ships were authorized to depart on Friday.

Another ship is heading to Ukraine to load grain, Turkey said. Ukraine said Friday that two more vessels — the Efe and the Sara — have been cleared to depart Odesa.

President Volodymyr Zelenskiy said he spoke Friday with Pope Francis, thanking the pontiff for his support of Ukrainians.

“We discussed what we can do together to restore peace in the state,” Zelenskiy said Friday in his nightly video address to the nation. “I briefed him on the situation on the front line and Russia’s constant efforts to increase the level of terror. He agrees with it, he supports us.”

Ukrainian officials were in touch with the IMF about the potential request, with the goal of moving forward as quickly as possible, Oleg Ustenko told Reuters in an interview.

The Kremlin is reportedly attempting to mobilize industry to support prolonged war efforts in Ukraine, the Institute for the Study of War said, citing Ukrainian intelligence.

Russia’s government in early August banned some employees and the entire leadership at the state industrial conglomerate company Rostec from taking vacations, the US military think-tank said in a report.

The two primary road bridges giving access to Russian occupied territory on the west bank of the Dnipro River in the Kherson region “are now probably out of use for the purposes of substantial military resupply,” after precision strikes by Ukrainian forces, the UK defense ministry said in a Twitter thread.

“With their supply chain constrained, the size of any stockpiles Russia has managed to establish on the west bank is likely to be a key factor in the force’s endurance,” the UK said.

Ukraine was downgraded to default scores by both S&P Global Ratings and Fitch Ratings after the majority of the country’s bondholders agreed to defer debt payments for two years.

The war-torn nation’s foreign-currency rating was lowered to “selective default” — or SD — from CC by S&P on Friday. Fitch followed shortly after with a downgrade of its own, cutting Ukraine to “restricted default” — or RD — from C. The moves follows the approval of a debt-restructuring plan that could save Ukraine about $5.8 billion.

Potash prices in the US continue to fall, despite Canadian producers saying supply will remain tight amid the war in Ukraine. Cheaper fertilizer means lower costs of production for crops.

Fertilizer sales have so far escaped bans levied against other Russian commodities, and exports are making it out of the country.

Vladimir Putin’s invasion of Ukraine set Russia’s economy back four years in the first full quarter after the attack. Data on Friday showed GDP shrank for the first time in over a year, although the 4% drop was not as severe as forecast.

The central bank published a draft of its policy outlook for the next three years, predicting the economy will take until 2025 to return to its potential growth rate of 1.5%-2.5%. Projections for 2022-2024 remained unchanged, with GDP forecast to shrink 4%-6% and 1%-4% this year and next, respectively.

“The economy will move toward a new long-term equilibrium,” Bank of Russia Deputy Governor Alexey Zabotkin said at a briefing in Moscow. “As the economy undergoes a restructuring, its growth will resume.”

US Official Says No Immediate Threat to Zaporizhzhia Plant (7:28 p.m.)

The senior US military official who spoke Friday said there is no immediate threat to a nuclear plant in Russian-occupied Zaporizhzhia but that could change at any moment.

Russia continues to engage in indiscriminate artillery fire in Ukraine, the official said. Earlier, the Russian envoy to international organizations in Vienna, Mikhail Ulyanov, said a mission to the nuclear plant led by International Atomic Energy Agency chief Rafael Grossi can’t take place before the “end of August or early September,” according to an interview with the Izvestia newspaper.

The IAEA, the United Nations’ nuclear watchdog, has warned of a “real” risk of nuclear disaster at Zaporizhzhia because of repeated strikes near the facility in recent days. Russian invasion forces took over the power station in March, though it continues to be operated by Ukrainian workers. Each side in the war accuses the other of targeting it.

Peloton to slash nearly 800 jobs, shutter stores after 90% drop in its share price

Judge orders Dublin family business wound-up and its €1m in…