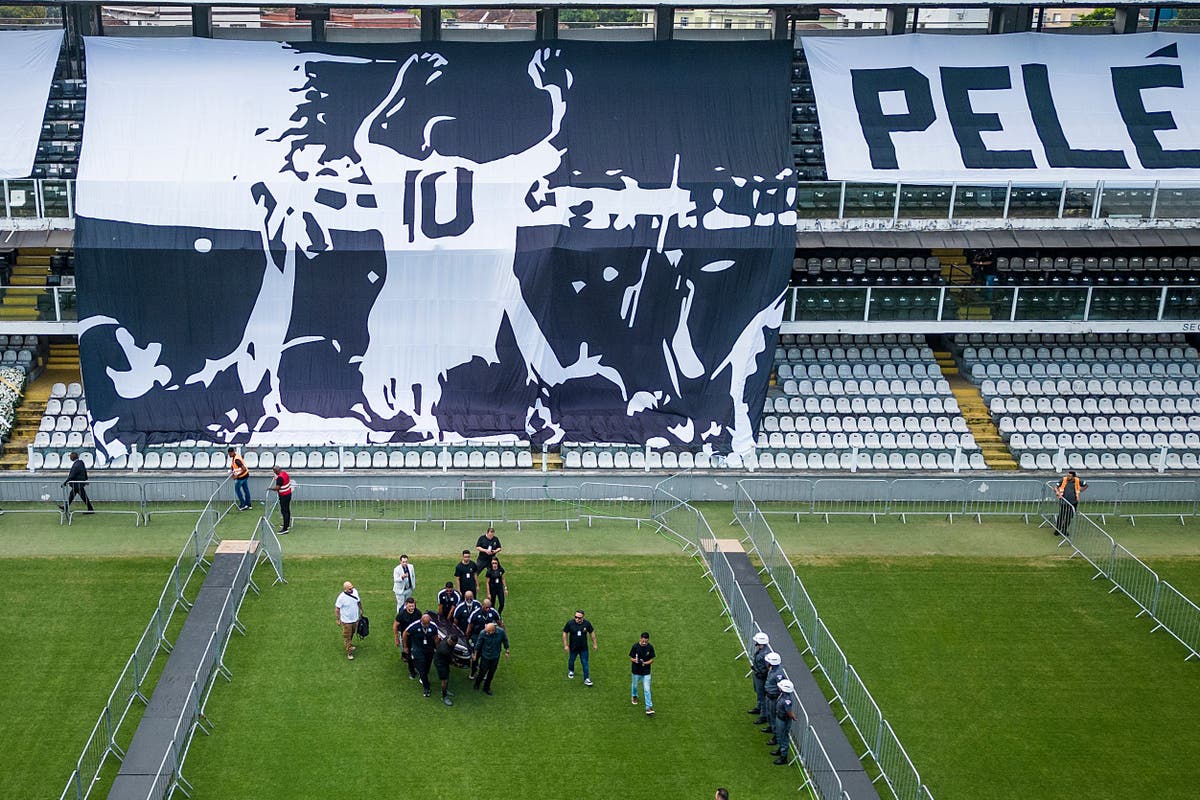 Brazil football legend Pelé will be buried today after a procession of his coffin in Santos.

Pelé, considered by many to be the greatest footballer of all time, was lying in state at the Santos stadium on Monday, where he played some of the best matches of his career. The three-time World Cup winner, whose full name was Edson Arantes do Nascimento, died on 29 December after a long battle with colon cancer. He was 82.

The Brazilian public was able to pay its final respects at Vila Belmiro Stadium, outside Sao Paulo. His casket was carried through the streets of Santos and passed in front of the home of his 100-year-old mother, Celeste. The coffin carrying the three-time world champion then left Albert Einstein hospital and was placed in the centre circle of the field.

He will be buried at the Memorial Necropole Ecumenica, a vertical cemetery in Santos, only in presence of family today (Tuesday 3 January).

Thousands of mourners began paying their respects to Pele in a solemn procession past his coffin at the Vila Belmiro Stadium in his hometown of Santos on Monday.

The Brazilian great died Thursday after a battle with cancer. The three-time World Cup winner was 82.

His coffin was placed on the field where he scored some of his best goals. Mourners walked past his casket in the midfield area of the 16,000-seat stadium outside Sao Paulo. A Catholic Mass will be celebrated there Tuesday morning before his burial at a nearby cemetery.

Vila Belmiro was decorated with Brazilian flags and No 10 shirts that became popular after Pelé started wearing them for Santos and Brazil. The stands were filling up with bouquets of flowers placed by mourners and sent by clubs and star players — Neymar and Ronaldo among them — from around the world as loudspeakers played a song named “Eu sou Pelé” (“I am Pelé”) that was recorded by the Brazilian himself.

Fans arrived early to honor, Pele, whose full name was Edson Arantes do Nascimento. Among them was Fifa President Gianni Infantino, who told journalists that every country should name a stadium after Pele.

“I am here with a lot of emotion, sadness, but also with a smile because he gave us so many smiles,” Infantino said. “As Fifa, we will pay a tribute to the ‘King’ and we ask the whole world to observe a minute of silence.”

A mourner is pictured inside the stadium of Pele’s former club Santos’ as he lays in state on the pitch before his funeral:

When it comes to properly appreciating a figure as mythic as Pele, the reality of their career can get lost amid the reverence over time, so it is worth recalling something actually said about him on one of the days he played. This was to be one of his greatest days.

In the hours before the 1970 World Cup final, Tarcisio Burgnich – about as grizzled an Italian defender as they come – kept repeating one phrase to himself.

“I was wrong,” Burgnich later said. Pele had that day made himself immortal.

Fifa will ask every country in the world to name a stadium in honour of Pele, its president Gianni Infantino said on Monday.

The Brazil great, who won the World Cup three times and scored over 1,000 goals in his career, died on December 29 aged 82 after a battle with cancer.

Infantino, who was in Brazil for Pele’s funeral in Sao Paulo, told local reporters: “We’re going to ask every country in the world to name one of their football stadiums with the name of Pele.”

In April 2021 Rio de Janeiro abandoned plans to name the famous Maracana Stadium after Pele after it was vetoed by the state governor.

Pele’s coffin was placed inside the Vila Belmiro stadium in Santos on Monday, the home ground of the club where he spent virtually his entire career.

Infantino released a statement on the day of Pele’s death which began: “For everyone who loves the beautiful game, this is the day we never wanted to come. The day we lost Pele.”

He described Pele as an “exemplary sportsman” and added: “Pele had a magnetic presence and, when you were with him, the rest of the world stopped.

“His life is about more than football. He changed perceptions for the better in Brazil, in South America and across the world. His legacy is impossible to summarise in words.”

Fans of late Brazilian football legend Pele attend his wake in Santos, where a banner reads ‘Long Live the King’.

Fifa president Gianni Infantino among those at Pele’s funeral

Fans are arriving at the Vila Belmiro Stadium in Santos after Pele’s coffin was brought onto the middle of the pitch, where he will lie in state for 24 hours. Pele’s wife, Marcia Aoki, is among those to arrive.

Fans lined up early Monday outside the Vila Belmiro Stadium ahead of Pelé’s funeral in his hometown of Santos. Pelé scored scored some of the best goals of his career at the 16,000-seat stadium outside Sao Paulo. His funeral is scheduled start at 10 a.m. local time, and the burial will take place in a vertical cemetery only 600 meters away on Tuesday.

Fans started arriving at the stadium in the early hours of Monday to pay their last respects to Edson Arantes do Nascimento, globally known as Pelé.One of them was Brazilian Supreme Court Justice Gilmar Mendes.

“It is a very sad moment, but we are now seeing the real meaning of this legendary player to our country,” Mendes told journalists. “My office has shirts signed by Pelé, a picture of him as a goalkeeper, also signed by him. DVDs, photos, a big collection of him.”

Inside the Vila Belmiro, a large tent has been set to place Pelé’s coffin. After Pelé’s funeral, his casket will be ushered through the streets of Santos before his burial. Brazil President Luiz Inácio Lula da Silva and other dignitaries are expected to attend.

Pele’s coffin arrives at Santos Stadium ahead of wake

Pele scored 643 goals for Santos in 656 competitive appearances, putting the club on the map not just in Brazil but around the world. Pele gave Santos two Copa Libertadores titles and two Intercontinental Cup titles against Benfica and AC Milan.

“There’s a Santos before Pele and another after him,” said Serginho Chulapa, Brazil’s striker in the 1982 World Cup and a local hero with more than 100 goals for the club. “He put both the city and club on the map. Before him, people came to work at the port and go to the beach.”

What we still don’t know about the suspect in the Idaho college student killings – Boston News, Weather, Sports

Do YOU think face masks should be brought back? Vote here