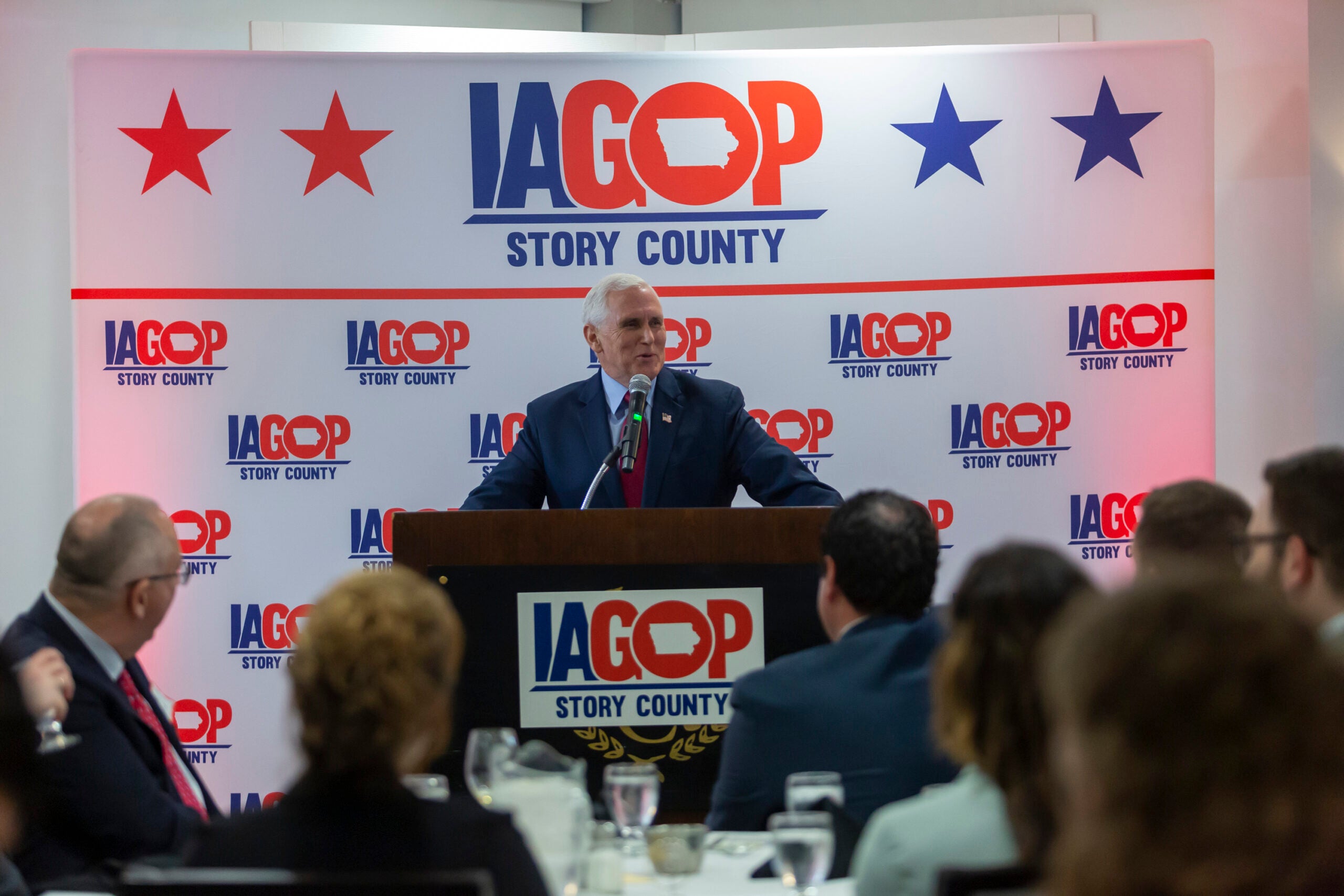 AMES, Iowa — For months, former Vice President Mike Pence has been edging away from his alliance of convenience with former President Donald Trump.

After four years of service bordering on subservience, the increasingly emboldened Pence is seeking to reintroduce himself to Republican voters before a potential presidential bid by setting himself apart from what many in the GOP see as the worst impulses of Trump. He’s among a small group in his party considering a run in 2024 no matter what Trump decides.

Pence first used high-profile speeches to criticize the former president’s push to overturn the 2020 election results, stating flatly that Trump was “wrong” in his assertion that Pence could have blocked the Electoral College ratification on Jan. 6, 2021. Pence then unsubtly visited the Charlottesville, Virginia, memorial to Heather Heyer, who was killed in the 2017 white supremacist riot there that Trump sought to rationalize by faulting “both sides.”

Now, on Monday outside Atlanta, Pence is taking his boldest and most unambiguous step toward confronting his former political patron. On the eve of Georgia’s primary, the former vice president will stump with Gov. Brian Kemp, perhaps the top target of Trump’s 2022 vengeance campaign against Republicans who didn’t bow to his election lies.

Pence grew close with Kemp during the pandemic and 2020 campaign, and now he is lining up against Trump’s hand-picked candidate, former U.S. Sen. David Perdue. But more than that, Pence is seeking to claim a share of credit in what’s expected to be the starkest repudiation yet of Trump’s attempt to consolidate power, with Kemp widely expected to prevail.

It is an emphatic break between the onetime running mates, who have not spoken for nearly a year but have also not publicly waged a proxy war until now. Pence, his aides say, knows full well what going down to Georgia represents and the symbolism alone will stand without him targeting Trump or even Perdue in his remarks.

In a statement before Pence’s visit to Georgia, Trump belittled his former vice president through a spokesperson.

“Mike Pence was set to lose a governor’s race in 2016 before he was plucked up and his political career was salvaged,” said Taylor Budowich, the spokesperson. “Now, desperate to chase his lost relevance, Pence is parachuting into races, hoping someone is paying attention. The reality is, President Trump is already 82-3 with his endorsements, and there’s nothing stopping him from saving America in 2022 and beyond.”

Georgia, however, may represent only the beginning of a new rivalry.

In an interview before a speech last month in Iowa, Pence pointedly declined to rule out running even if Trump also enters the 2024 primary. “We’ll go where we’re called,” Pence said, explaining that he and his wife would act on prayer. “That’s the way Karen and I have always approached these things.”

Recalling the gratitude he gets from resisting Trump’s demands that he block Congress from affirming President Joe Biden’s victory, he said: “I have been very moved traveling around the country how much people have made a point to express appreciation. It has been very humbling to me.”

Yet, in the same interview, he recalled spending “five years in the foxhole” with Trump, noting that he was “incredibly proud of the record,” before giving a dinner speech trumpeting the “Trump-Pence” administration multiple times.

His approach amounts to the first soundings of a sort of Trump-without-the-chaos strategy, a bet that Republican primary voters crave the policy record of the last administration but without the impulsiveness, norm-breaking and naked demagoguery.

There may yet be a constituency for such an appeal, as this year’s GOP primaries demonstrate how Trumpism is flourishing no matter whom its architect blesses.

However, it’s far from clear that the sober-minded Pence is the best vessel for that message at a time many GOP voters thrill more to closed-fist Trumpian pugnacity than paeans to the power of prayer.

As of now, Trump is the clear favorite. Yet, all his hints about becoming the first former president in over a century to try to reclaim the office haven’t stopped a host of other potential aspirants.

Whether it’s Pence or former Trump Cabinet members or a range of other elected officials, ambitious Republicans are already visiting early nominating states such as Iowa and New Hampshire, courting influential lawmakers and cultivating relationships with donors.

Even if Trump runs, many Republicans believe there will still be a hotly contested race.

“I don’t think it ends the primary,” said New Hampshire Gov. Chris Sununu, who is mulling a presidential campaign. “My sense is you’re still going to have a very robust primary here just because everyone has to earn it.”

So far, Republican contenders are voting with their feet.

Among those who have beaten a path to the early nominating states: Pence; former Secretary of State Mike Pompeo; former United Nations Ambassador Nikki Haley; and Sens. Tom Cotton of Arkansas, Tim Scott of South Carolina and Rick Scott of Florida.

Should Trump run, he would most likely sideline some Republicans who would either find him difficult to beat or just as soon wait it out. A smaller group of contenders, however, may find the less-crowded field more appealing.

Those ranks include former New Jersey Gov. Chris Christie, who was one of Trump’s earliest and most prominent supporters in 2016 but who has broken with him since the 2020 election.

“Given the problems the country is facing at home and abroad, if you only feel up for it if somebody else doesn’t run, well, then you better not run,” Christie said. “Everybody who is considering running for president in ’24 should have a moral obligation to make that decision regardless of who else runs.”

As for his own plans, he said, “Sure, I’m thinking about it.”

Trump’s populist and pugilist imprint on the party has been cemented, whether he runs or not. That’s why Florida Gov. Ron DeSantis is being so closely watched by conservative voters, donors and activists.

Seizing on every chance to confront the left and the news media, and to draw coverage on right-wing media for both, DeSantis has risen to second place behind Trump in a series of way-too-early polls of Republican voters.

But he has steadfastly refused to visit Iowa and New Hampshire as a would-be White House candidate, leaving Florida mostly just to stockpile more money for his reelection. That’s not to say he’s not keeping his eye on national politics — he reached out to Iowa Gov. Kim Reynolds to wish her well before her response to Biden’s State of the Union address this year.

DeSantis, though, is hardly beloved among his fellow Republican governors, a group that’s unlikely to rally around him in the same fashion they did George W. Bush, then the Texas governor, in 2000.

“I know there’s a lot of talk on Fox News and stuff like that on the national level or in Florida, but there’s really not talk about him here in New Hampshire,” Sununu said of DeSantis.

What is there, said longtime Republican strategist Jim Merrill, is a quiet but persistent appetite among many in the rank-and-file to turn the page on Trump, at least as the party’s nominee.

“There is a desire to move on here, and it’s not just among the John Kasich and Bill Weld crowd,” said Merrill, alluding to two former Republican governors who ran as anti-Trump moderates in the state’s primary.

Yet, if Trump faces a divided Republican field as he did in the first wave of caucuses and primaries in 2016, he could again claim the nomination with a plurality rather than a majority in many states because of his seemingly unshakable hold on one-third of his party’s electorate.

At a county GOP dinner in Ames — a college community that is more upscale, and decidedly less Trump oriented, than much of Iowa — it was not difficult to find Republicans eager to find a fresh nominee, even if they edged into saying as much with Midwest Nice euphemisms.

Trump was “too divisive even though what he did is great,” Weber said as his wife, Carol, suggested another Trump bid “may divide people.”

Yet, they weren’t ready to sign up with Pence, as both noted their affection for Cotton and DeSantis.

Pence’s speech was received well, if not overwhelmingly so. It had all the bearings of a Republican in Iowa leaning toward a presidential bid — knowing references to local politicians, Midwest totems such as John Deere and attacks on the Democrats in power in Washington.

Yet, it also had the distinct air of a pre-Trump brand of Republicanism, with only the slightest criticism of the news media (and that was even gloved with “all due respect”), references to becoming a grandfather and G-rated jokes that could have just as easily been delivered by Mitt Romney (it involved Washington, D.C., and “hot air.”)

Few at the gathering liked Pence as much as Kevin and Linda Lauver.

Their phones blaring with tornado warnings, the Lauvers took shelter in the Ames Country Club basement before the April GOP dinner. And they bumped into the evening’s keynote speaker.

“We want somebody from the Midwest,” Linda Lauver told Pence, nudging him to run for president in 2024. “I like Mike,” Kevin Lauver chimed in.

Pence earnestly patted his heart and offered his thanks.

As Kevin Lauver headed back upstairs after the tornado false alarm, he wanted to be clear that he liked Trump.

“He did what he said what he was going to do,” said Kevin Lauver, before adding in Iowa deadpan: “When he said the least, it was the best.”