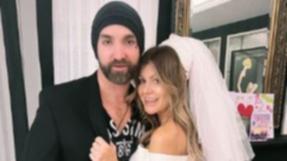 Perth fashion designer Lydia Tsvetnenko sparked speculation she had tied the knot for a second time after a series of snaps on social media, but not all was as it seemed.

The co-founder of fashion label House of Zhivago posted the photos of her with partner Ben Newport to her Instagram stories on Sunday.

In one photo, she was wearing a white mini dress with thigh high white boots and a veil, and captioned the post “we did a thing…”.

While Tsvetnenko, the ex-wife of embattled tycoon Eugeni “Zhenya” Tsvetnenko, dressed up for the ‘nuptials’, Newport opted for a low-cut t-shirt worn under a suit, whilst he also donned a beanie.

Two other photos were posted of the couple, a series of photo booth shots and another of them kissing.

However when contacted by AAA, Tsvetnenko dashed hopes of newly wedded bliss, saying the photos were simply from a party with an op-shop theme.

Her first wedding, to tech tycoon Zhenya Tsvetnenko, cost a whopping $600,000, but for a short time it appeared that Lydia Tsvetnenko had opted for a more low key affair to tie the knot a second time.

Her wedding to the tech tycoon was at Peel Manor House in Baldivis in 2008, with the bride arriving in a horse drawn carriage, while $80,000 was spent on the marquee, $60,000 on flowers, and $12,000 on black silk, crystal chandeliers and hundreds of butterflies.

Despite the expensive nuptials the pair split in 2019. Tsvetnenko first revealed she was in a new relationship earlier this year when she posted a photo with Newport and their friends Ryan Crowley and Lauren Dunn at Cooee restaurant.

While her ex is currently in custody in the United States for his role in “one of the biggest telecommunications scams in US history”, Newport is the former chief executive of investment company Hot Copper Holdings and is now alumnus of business school INSEAD.

Tsvetnenko has two children from her previous marriage, daughter Max who was born in 2013, and son Jet, born in 2015.