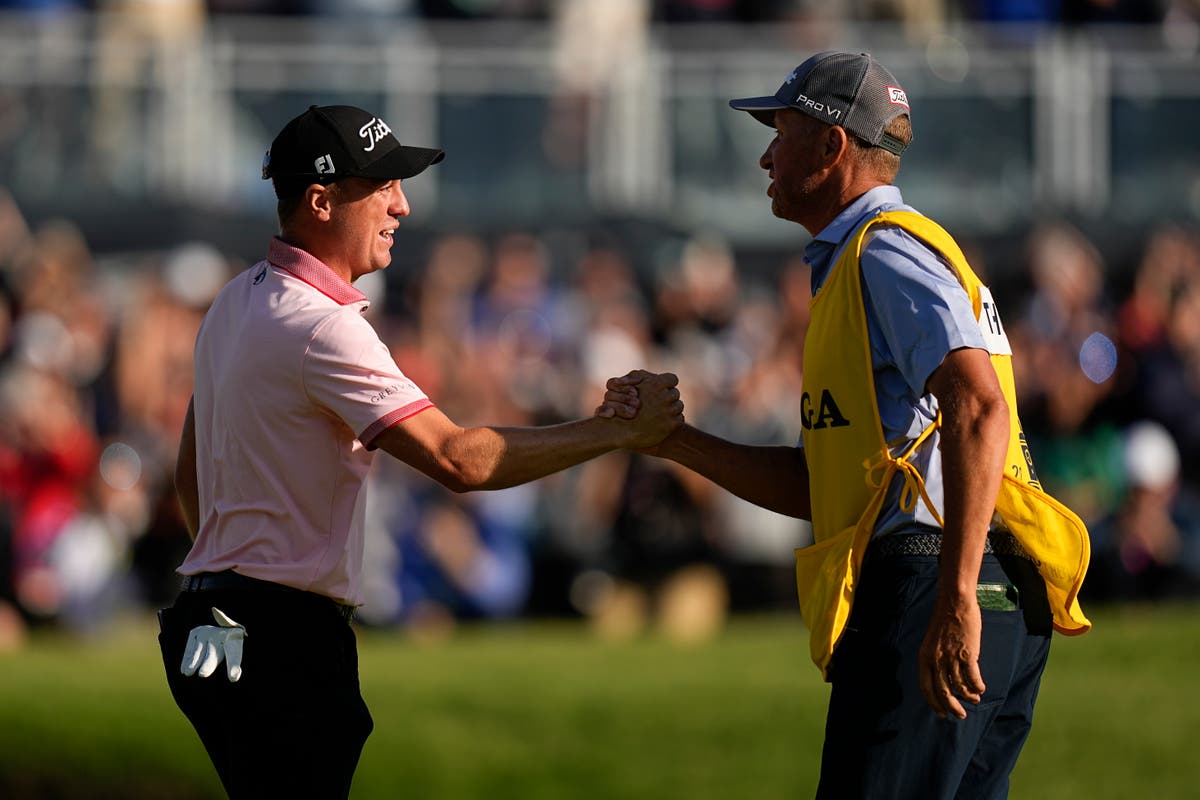 Justin Thomas praised the role of Jim Mackay in his PGA Championship triumph as the caddie’s absent former employer continued to loom large at Southern Hills.

Thomas defeated fellow American Will Zalatoris by a shot in a three-hole aggregate play-off after the pair tied on five under par and capitalised on a late implosion by Chile’s Mito Pereira, who double-bogeyed the 72nd hole.

A third round of 74 had seemingly left Thomas with too much ground to make up as he trailed Pereira by seven shots, but a conversation with Mackay on Saturday evening paid dividends.

“I’m fully confident in saying that I wouldn’t be standing here if he didn’t give me that, wasn’t necessarily a speech, but a talk, if you will,” said Thomas, who won the 2017 US PGA at Quail Hollow.

“I played pretty well for shooting four over and I felt like I’d played terrible. And he (Mackay) was just like, ‘dude, you’ve got to be stop being so hard on yourself. You’re in contention every single week we’re playing’.

“‘It’s a hard golf course, it’s a major championship. You don’t have to be perfect. Just don’t be hard on yourself. Just kind of let stuff happen, and everything is trending in the right direction. So just keep staying positive so that good stuff can happen’.

“I left here in an awesome frame of mind and there’s not very many times after shooting four over on Saturday of a major I left in as good a frame of mind as I have.”

Mackay has plenty of experience of winning major titles, claiming five during his long spell on the bag for Phil Mickelson, although he did not usually get the traditional caddie “trophy” to show for it.

As detailed in the new biography of Mickelson, which also contains the explosive comments about the PGA Tour and rival Saudi-backed league with which he remains linked, Mickelson would give the flag from the 18th hole to his grandfather, a former Pebble Beach caddie.

Shortly after their split in 2017, Mickelson did send Mackay the flags they had won together but, according to the biography written by Alan Shipnuck, Mickelson had “autographed them in comically large letters” and Mackay did not display them in his house.

Following Sunday’s play-off, Mackay was pictured collecting the flag at Southern Hills and was asked if he knew where he would display it.

“I’ve got a spot in mind, but somewhere that my friends can come around and see it,” he told Golfweek.

Thomas follows his good friend Tiger Woods in winning the US PGA at Southern Hills, Woods having claimed the 13th of his 15 major titles in Tulsa in 2007.

Woods withdrew following a third round of 79 as he struggled with the pain in his right leg following last year’s car accident in Los Angeles, but spoke to Thomas on Saturday evening.

“I asked how he was feeling, and he just said he was feeling terrible because my name kept dropping on the leaderboard,” Thomas joked. “So I was like, ‘Thanks, good to talk to you too, I’ll talk to you later’.

“I’m sure he probably will give me a hard time for shanking it (on the sixth hole in the final round). I should have made the putt on 18. Shouldn’t have been in a play-off. I don’t know, he’ll always find something to give me grief about.”

Asked if it was difficult to watch Woods card his highest ever score in the US PGA, Thomas added: “I wouldn’t say how tough it was to see him struggle. I mean, he made the cut in his second major in a row, what, a year and a half after being in a gruesome car accident, broken leg?

“I don’t think you guys understand how unbelievable that is. He’s a freak of nature. It’s mind-blowing the things that he can do with his mind.

“I didn’t play during his prime, but him making the cut these last two tournaments for how, some of the conditions he was in last year, it’s absurd. Like beyond absurd.”