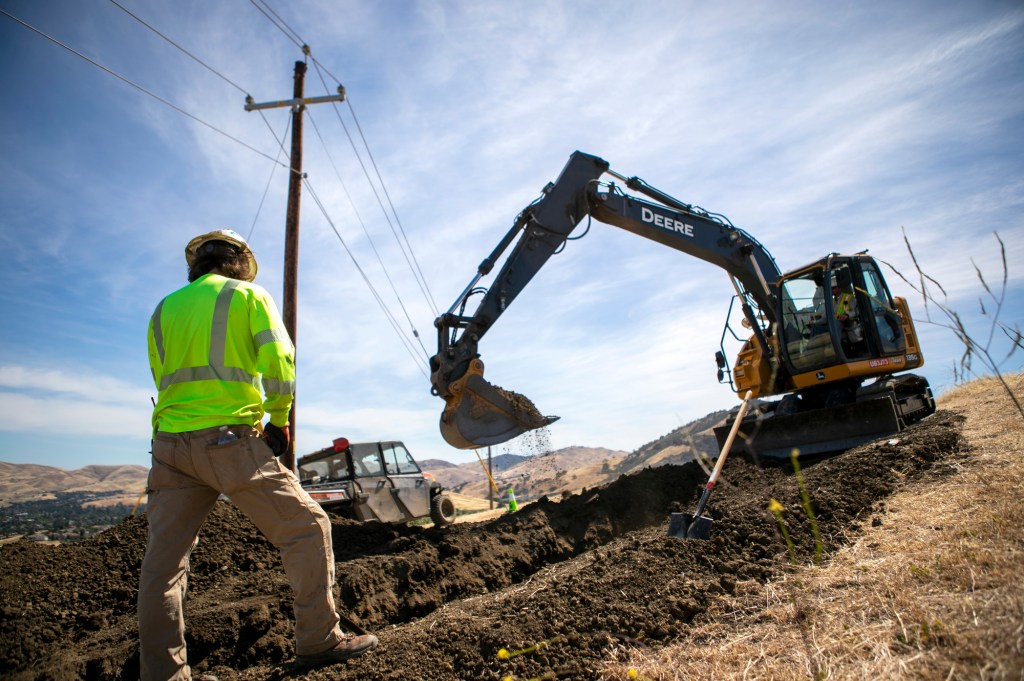 WALNUT CREEK – Etched in dirt, a narrow furrow is the only clue that the grasslands of Lime Ridge Open Space will soon be restored to their original splendor, cleared of dangerous power lines that could ignite nearby subdivisions.

The undergrounding project, costing $3.75 million a mile, represents the beginning of a 10,000-mile-long effort by Pacific Gas and Electric to bury the state’s distribution lines to cope with the growing risk of winds and wildfires linked to global warming.

The utility long resisted calls to bury its power lines as being too costly.

But after its equipment was blamed for sparking a string of devastating wildfires in Northern California the past few years that have killed dozens of people and destroyed thousands of homes, the company reversed its position. It filed for bankruptcy protection in 2019 after facing $30 billion in wildfire-related fines and liability, and pleaded guilty to 84 counts of involuntary manslaughter in the 2018 Camp Fire that destroyed the town of Paradise.

Other fire-prone areas of the Bay Area are also targeted for undergrounding. Based on an analysis of weather patterns, fire history, tree density, outage data and other factors, priority is going to parts of Santa Rosa, Rossmoor, Pacifica, West Marin’s Lucas Valley and the coastal towns of Pescadero and Davenport.

Only 175 miles will be buried this year — but the project will accelerate. PG&E, the nation’s largest electricity provider, has estimated about 3,600 miles will be completed from 2022 to 2026. When all 10,000 miles are underground, risk will be reduced 70% to 80% in high fire-threat districts, said Martin.

“We’re not convinced that undergrounding offers the greatest reduction for the most effective cost,” said Mark Toney, executive director of TURN, The Utility Reform Network. “And that’s really important, because we’re in an affordability crisis, when it comes to monthly electricity bills. We want PG&E to look at other options. We’re skeptical that ratepayers will end up getting their money’s worth.”

Meanwhile, burying wires and cables is getting cheaper and easier. With innovations in tools and techniques, the utility expects that the cost will drop to $2.5 million a mile by 2026.

It’s a trend all over the United States as a changing climate sparks severe weather patterns.

“This is not just a California problem. This is a national problem,” said geotechnical engineer Brian Dorward of Brierley Associates. “California has wildfires. Florida has hurricanes. The Midwest has tornadoes. All natural disasters play havoc on power lines, which are critical infrastructure.”

But none have proposed a project on the scale of PG&E’s new plan. San Diego Gas & Electric, a smaller utility, has buried 44% of its distribution lines and 4.4% of its transmission lines. In cities such as Manhattan, lines have been channeled underground for years. cq comment=”; now, there’s a proposed underground line to stretches all the way from that city to Toronto. Germany and the Netherlands are moving to put all their lines underground” ].

Compared to elsewhere, PG&E has been slow to embrace the solution, said Robert McCullough, a veteran energy consultant in Portland, Oregon, and adjunct professor of economics at Portland State University.

“California is the nation’s most regulated state, with a certain amount of inertia. It’s rigid and slow to respond,” he said. “But Pacific Gas & Electric is the poster child of rigidity. … It should have been fixing everything all the time.”

In the East Bay, the new underground route across the windswept chaparral of Lime Ridge will link Ygnacio Valley subdivisions in Walnut Creek and Concord. Once it is finished, tall distribution towers will come down.

The installation method is straightforward in the region’s soft sedimentary soil. A bulldozer with a plowing blade digs the furrows. Twelve-kilowatt lines are buried almost three feet underground, deep enough to prevent damage from erosion or animals. The lines, only 1-1/2 inches wide, sit inside a 6-inch black PVC conduit, so there’s space for ventilation. A second empty conduit, which serves as a spare, sits alongside.

Then work crews quickly cover it with dirt, and dampen it. Sometimes they reopen an area to check the integrity and depth of the conduit.

The process is not always so simple in areas where other utilities — gas, cable, fiber-optic — are also underground. That requires open trenching, a slower and more traditional approach with much more hands-on manpower.

But new tools are accelerating the work. A powerful device called a “rock wheel” can cut clean rock walls with a sharp rotary blade. Another, called an “asphalt zipper,” can open up a 1,000-foot-long stretch of road in merely an hour; using backhoes and jackhammers, it takes days.

If drilling must be deep or if a line must run under a river or a road, a technique called horizontal directional drilling is a better option, said Ariaratnam. Rather than trenching, it uses a machine to drill a precisely-guided pilot hole and then pulls a conduit, holding the cable, through the hole. While more expensive than open trenching, it greatly reduces the time and effort spent on restoration.

For now, PG&E’s program is focused on burying distribution lines which are closer to homes, rather than the large high-voltage transmission lines, said spokesperson Jennifer Robison. The transmission lines conduct more heat, so they must be housed in big concrete ducts, she said.

While welcoming the effort, McCullough and others urged greater speed and expansion.

“We are at the start of global warming, not the end,” he said. “We’re going to be seeing increased average temperatures and wind speeds for years to come.”