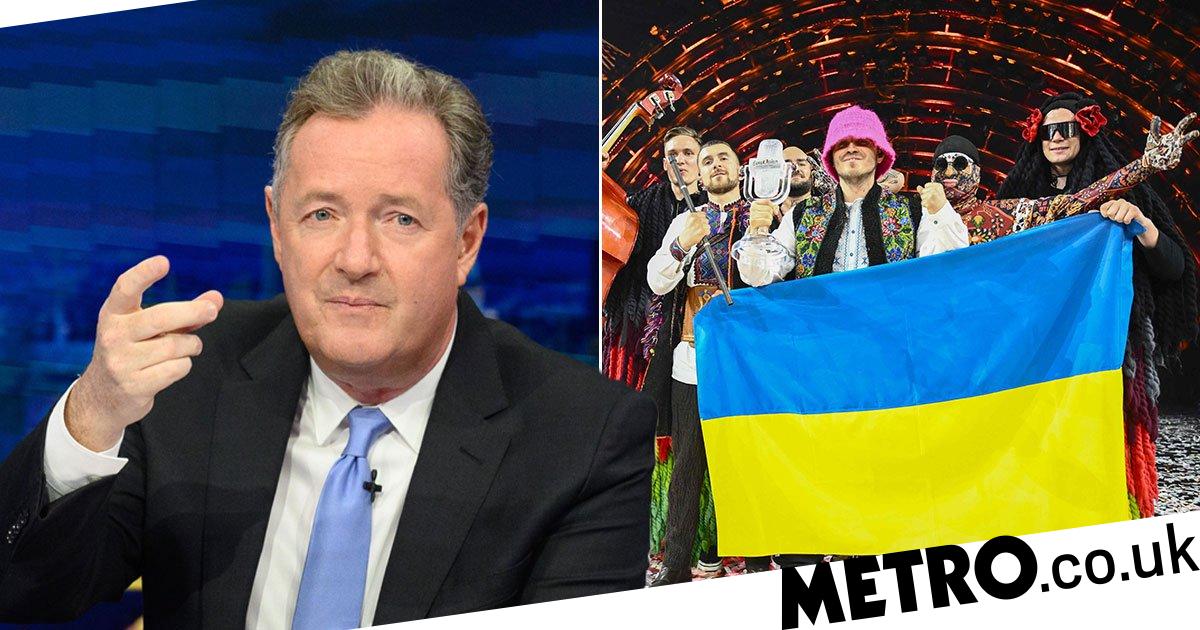 Piers Morgan isn’t so convinced Ukraine won this year’s Eurovision on merit alone, suggesting voters were motivated by the events of the Russian invasion.

It was a particularly special moment for Ukraine, which has been devastated by Russia’s relentless bombing campaign on the country, causing the deaths of thousands of civilians since February.

Kalush were early favourites to win and impressed voters with their popular song Stefania, which was written about frontman Oleh Psyuk’s mother.

One Twitter user challenged Piers on his criticism of Eurovision, suggesting the broadcaster would rather ‘we… just feed all the songs into a computer and it should calculate which one is “best”.’

‘They got the sympathy vote, which is fine so long as we drop the word “contest” from Eurovision.’

He added in a separate tweet: ‘The world’s most absurd, pointless, politically-motivated “contest” excels itself. Ukraine could have sent one of its heroic bomb-sniffing dogs to bark the national anthem and still won. Happy for them, but please let’s stop calling #Eurovision a contest… it’s a rigged farce.’

In the UK, viewers were able to vote via phone or through the Eurovision app. Voting opened after the final song was performed and remained open only for 15 minutes after. It’s not possible to vote for the act representing your own country, so voters would have had to choose another entrant.

Continuing his takedown on the competition, Piers added: ‘The result of an international singing “contest” shouldn’t be determined by which countries are suffering most at the time of the ‘contest’ or there is no point having a contest.’

Kalush has been flooded with support from countries all over the world, as well as Sam for his triumph in coming second.


MORE : Eurovision 2022: Ukraine’s commentator breaks down in tears and vows ‘we will win the war’ after Kalush Orchestra’s victory