Planche Collective is making space for marginalized skateboarders in Montreal 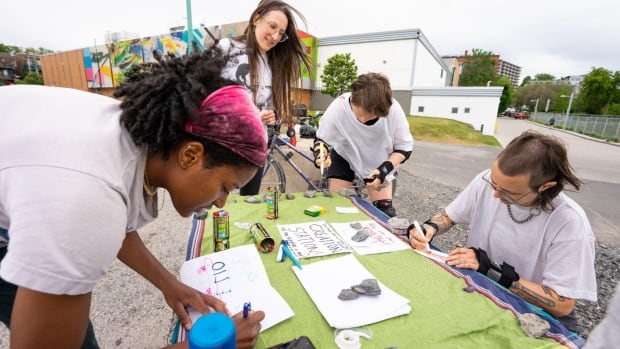 Cheers ring through Montreal’s Jarry Park as skateboarders race down a hill on a cool and windy Sunday afternoon. They smack their boards on the concrete, taking turns facing off in a friendly match as part of Planche Collective’s biweekly skate sessions.

The collective was started last year with the mission of creating a barrier-free space for women, queer, trans, Black and Indigenous people and other people of colour to get into skateboarding — regardless of skill level. Seeing a lack of welcoming skating spaces for marginalized groups in Montreal, the organizers created an open-invitation biweekly skate meetup at the park located at the borders of the Park Ex, Villeray and Mile Ex neighbourhoods.

Planche returns this summer to pick up where they left off: learning, growing and supporting each other.

Skateboarding is hard enough without the added barriers of belonging to a marginalized community. Co-organizer Marie Anne Louis-Charles found that learning to skate can be hard to commit to in more traditional skate environments.

“Being the only woman, the only queer person, the only trans person in a space… that’s so many things to contend with at once,” Louis-Charles said.

Starting Planche was a way to build a skating culture that was more reflective of her experience, without people “having to struggle and fight to occupy space.”

While there are plenty of women, queer and trans people who skate, the members of Planche say it can be intimidating to practise at skate parks that are often dominated by men who are not transgender or non-binary.

They say that this both makes it harder to get in regular skateboarding time and find their skating community.

Valentin Garriga, another co-organizer of Planche sessions, said that before joining Planche, they “would feel like kind of an outcast” when going to a skate park, echoing the sentiments of other organizers and participants. Instead, they would skate alone.

One of the main goals of Planche is to provide a community for women, queer and trans skaters that they might not be able to find elsewhere — gaining the opportunity to find the true joy of the activity.

“Once I found queer skater friends, that’s when I discovered the magic of skateboarding,” Garriga says.

At Planche, knowing that the other skaters share their own experiences helps give them the confidence and support to fail without judgment, or further marginalization.

Louis-Charles says this community allows skaters to strike out into the larger skating scene by providing them with that solid foundation. She loves seeing attendees at Planche sessions go out and schedule meetups on their own time.

“You just get your feet under you here,” she says. “You build up a bit of courage.”

Our researcher Emma Hébert paid a visit to the Planche skateboard collective, which aims to create a safe space for skaters who are women, LGBTQ2S+ and Black, Indigenous and people of colour.