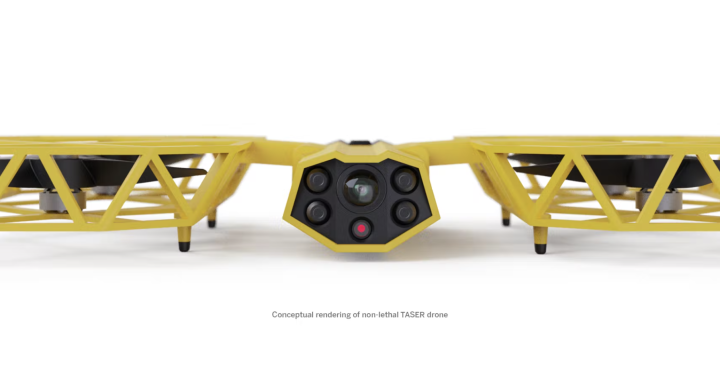 Axon, the maker of Taser-brand stun guns, announced Monday that it is halting plans to develop weaponized drones intended to stop school shootings after nine of its ethics board members resigned.

Axon made its plans for Taser-equipped drones public last Thursday, proposing to use a system of cameras and sensors to detect shooters. First responders would then pilot the pre-installed drones with the aim of “incapacitating an active shooter in less than 60 seconds.”

Mere hours after the announcement, Axon’s ethics board made a statement condemning the project, saying that it gave them “considerable pause.”

The ethics board wrote that Axon came to them a year ago with the idea for Taser-equipped drones, but the project was much more limited and would have only been used by police.

“A majority of the ethics board last month ultimately voted against Axon moving forward, even on those limited terms,” wrote the board. “Now, Axon has announced it would not limit the technology to policing agencies, but would make it more widely available. And the surveillance aspect of this proposal is wholly new to us.”

But in the aftermath of a school shooting at Robb Elementary in Uvalde, Texas, that left 19 students and two teachers dead, Axon’s CEO and founder Rick Smith decided to move forward with the project development — as Axon’s ethics board only operates in an advisory capacity.

Smith told the Associated Press last week he bypassed the ethics board and made the idea public in part because he was “catastrophically disappointed” in the response by police who didn’t move in to kill the Texas school shooting suspect for more than an hour.

But in the wake of the resignation of the majority of its ethics board — which is made up of privacy advocates, former police chiefs, civil rights advocates and computer scientists — Axon has decided to halt the controversial project.

Smith wrote in a news release that Axon announced the drone project in order to “initiate a conversation on this as a potential solution” to the rise in mass shootings in the U.S.

“It did lead to considerable public discussion that has provided us with a deeper appreciation of the complex and important considerations relating to this matter,” Smith wrote. “However, in light of feedback, we are pausing work on this project and refocusing to further engage with key constituencies to fully explore the best path forward.”

Nine of 12 of Axon’s ethics board members resigned on Monday, the same day that Axon announced that development of the Taser-equipped drone would be halted. Those who resigned issued a statement saying they had “lost faith in Axon’s ability to be a responsible partner” and that the proposed drone is “distracting society from real solutions to a tragic problem.”

“We wish it had not come to this,” the statement reads. “Each of us joined this Board in the belief that we could influence the direction of the company in ways that would help to mitigate the harms that policing technology can sow and better capture any benefits.”

In response to the resignations on Axon’s ethics board, Smith wrote that “It is unfortunate that some members of Axon’s ethics advisory panel have chosen to withdraw from directly engaging on these issues before we heard or had a chance to address their technical questions.”

“We respect their choice and will continue to seek diverse perspectives to challenge our thinking and help guide other technology options that we should be considering.”

Ryan Calo, a University of Washington law professor and former member of Axon’s ethics board, told Reuters why he left his position.

“I’m not going to stay on an advisory board for a company that departs so far from expectation and protocol or, frankly, who believes ubiquitous surveillance coupled with remote non-lethal weapons is a viable response to school shootings,” he said.

Today I and 8 colleagues resigned from the Axon Ethics Advisory Board in the wake of the company’s decision to respond to the Uvalde shooting by placing schools under surveillance and weaponizing drones. You can read our statement here. https://t.co/WUohTmyBTn

Giles Herdale, one of the board members who decided to stay, told Reuters that he didn’t resign because he could have more influence “in the tent than outside it.”

— With a file from the Associated Press

Ubank apologises for app issues blocking people from their…

Top of the class: Here are Canada’s most popular baby names…