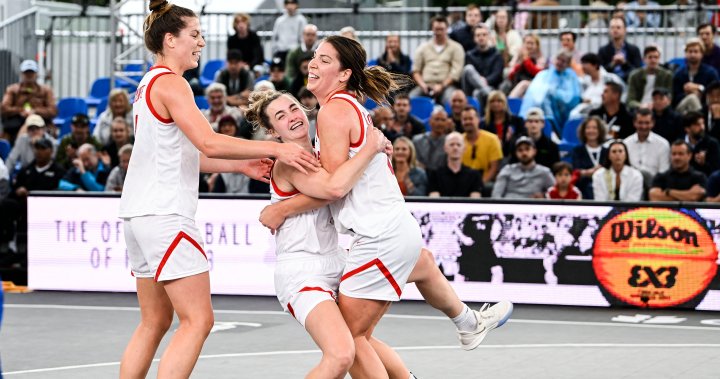 The Canadian women’s 3×3 basketball team advanced to the semifinals of the FIBA World Cup 2022 after back-to-back wins on Saturday.

Canada defeated top-seeded Germany 22-13 and then topped the United States 14-10 to move on to the tournament’s next round.

The semifinal and final will both be on Sunday.

“I am just super proud of our team,” Michelle Plouffe said after the second win of the day.

“We came in here, and to us, we thought we could get to the podium, but I think to other people we were an underdog, so I’m just so proud of how we fought through each match.”

Edmonton’s Michelle Plouffe finished with nine points and three key assists against Germany, shooting 4-for-5 from one-point range and 2-for-3 from long range.

“Germany is a great team, they have a lot of chemistry, they’ve played together for a while,” Crozon said after beating Germany.

“We played them in the women’s series final last year and lost so we know they’re a really great team and really had to prepare coming into this game.”

The U.S. was undefeated heading into Saturday’s quarter-final.

In the final minute of play, Katherine Plouffe found a cutting Bosch who was fouled under the rim and went to the line to make a free throw to give Canada a 13-10 advantage.

A jumper from Katherine Plouffe extended Canada’s lead to 14-10 make the semifinals.

Gunman, 42, who killed two in ‘extremist Islamic terror attack’ at Oslo gay bar moved to country when he was 12