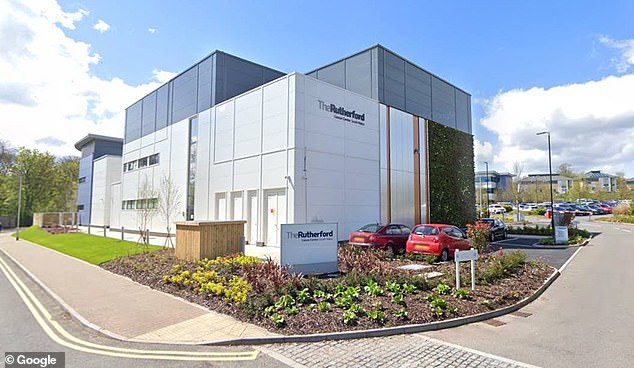 A private cancer clinic has gone bust after an offer to help the NHS clear pandemic backlogs fell on deaf ears.

Rutherford Health Group, which runs five cancer clinics in England and Wales, has announced it has filed for liquidation.

Bosses have blamed a double blow of cancer cases being missed due to the Covid pandemic leading to fewer patients, combined with a lack of interest from the NHS in using the private sector to tackle cancer care waiting lists.

The not-for-profit offer was made in response to growing fears that cancer cases are being missed and a failure to meet treatment timeframes in the NHS.

‘And whilst we secured some contracts they were insufficient and we have not been able to secure mechanisms to expedite process.

‘This added to severe financial pressures on the business and we had no option other than to place the Group into liquidation.’

Charities said the news signalled a ‘worrying’ time for patients whose care had been disrupted and called for them to be swiftly transferred.

Professor Karol Sikora, founder of Rutherford Health, sent letters in December to the Department of Health and NHS England offering cancer checks and treatment to patients in England and Wales. Pictured: Rutherford Health cancer centre in Newport, South Wales. The company also has centres in Reading, Liverpool, Newcastle and Taunton 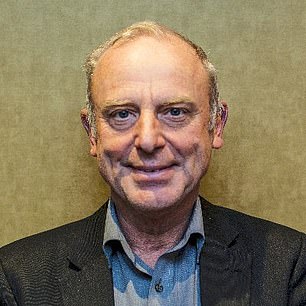 About 50 private patients are still on Rutherford’s books after the company began to slow down operations over the past few months in anticipation of shutting down.

Some 280 Rutherford Health staff have also been told they will lose their jobs.

The NHS has hit back at Rutherford’s claims, saying the cancer clinics did not provide the services it needed to tackle backlogs.

Mr Sullivan said another factor behind the liquidation was that fewer cancer patients were diagnosed as a result of the pandemic.

‘Covid has been particularly damaging for us as fewer patients were presenting with side effects during the lockdowns, and as a result cancer diagnosis has been delayed and sadly, in many cases, missed,’ he said.

‘This has meant fewer cancer patients have been presenting to our centres.’

Earlier this year ,Professor Sikora revealed Rutherford had offered to help the NHS on a not-for-profit basis by taking on more cancer patients. 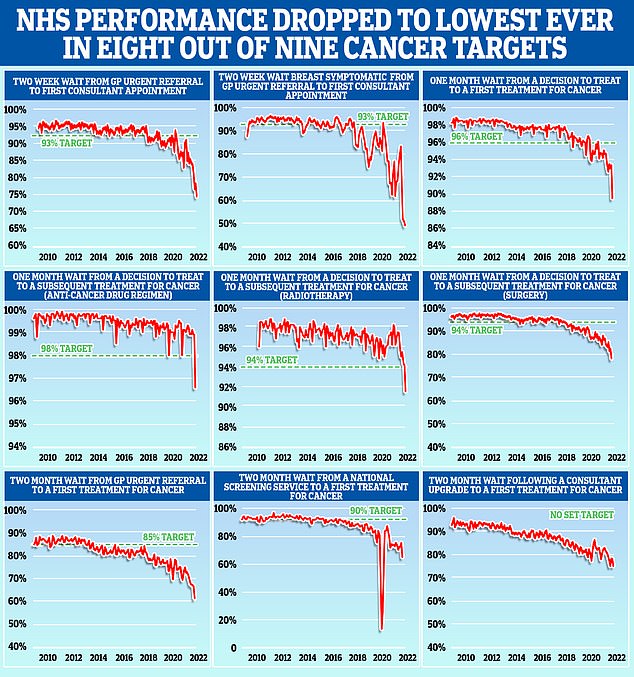 NHS cancer diagnosis and treatment targets have reached record lows in the vast majority of metrics since the pandemic and with one exception, which has no target, all are below the health service’s operation standard 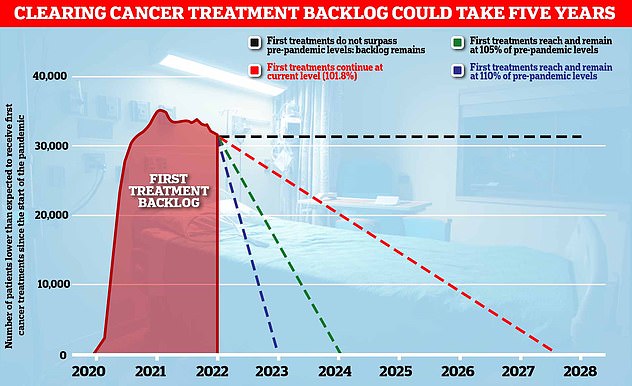 England’s Covid backlog in cancer care is set to last another five years without urgent action, a leading cancer charity has warned. Graph shows: The number of patients fewer than expected to receive first cancer treatment since the start of the pandemic (red line) and how long it will take to reduce to zero if treatments continue at the current pace (dotted red line), increase 5 per cent on pre-pandemic levels (dotted green line) or increase 10 per cent on pre-pandemic levels (dotted blue line) 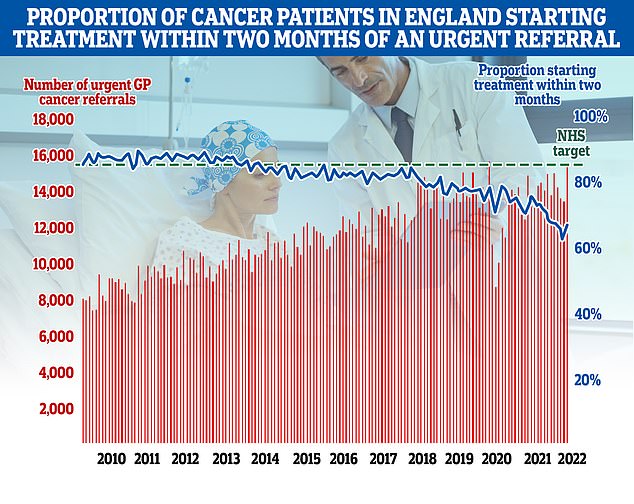 Dr Liz Bishop, who sits on NHS England’s cancer board, said she ‘does not think’ 85 per cent of cancer patients will start their treatment within two months by next spring. The health service’s own guidelines set out that at least 17 in 20 of those who receive an urgent GP referral for cancer should start treatment within 62 days. But the target — which was introduced in 2009 — hasn’t been met since 2015 and fell to a record low of 61.8 per cent in January

While it already had some deals with local NHS trusts to take on some patients, the group said it wanted to expand this to help with the ‘national backlog in cancer diagnostics and treatment’.

At the time it said it would offer cancer diagnosis and treatment services to any patients referred to it by NHS doctors. But the offer was not taken up.

NHS will NOT hit its target to return treatment waits for cancer to pre-Covid levels by next March, health chief warns

The NHS will likely still be missing crucial cancer targets next year, a senior health official has warned.

Dr Liz Bishop, who sits on NHS England’s national cancer board, admitted that she ‘does not think’ it will be ‘business as usual’ by March.

This is despite the Government promising performance to return to pre-pandemic levels by spring 2023.

It comes in wake of the 1.25 per cent national insurance hike, which is set to raise billions to help the NHS recover from the pandemic and reform social care over the next three years.

Experts called Dr Bishop’s comments a ‘frightening admission of defeat’, with the cancer crisis set to cost ‘thousands of lives’.

Conservative thinktanks claimed the NHS has to ‘get to grips’ with the backlog and provide ‘world-leading care’ to Britons, who are funneling more cash into the health service ‘than ever’.

Its clinics are in South Wales, Northumberland, Liverpool and Thames Valley, with a community diagnostics centre in Somerset.

The group spent £240million to build and develop is the cancer centres.

Rutherford Health said it is currently informing patients about its plans and a small number of NHS patients it was caring for are now being handed back over to local trusts to finish their treatment.

A NHS spokesperson told MailOnline Rutherford had not been in a position to help the health service, despite the group’s clams.

‘The Rutherford does not provide surgery services which is what the NHS currently most needs to help tackle waiting lists,’ they said.

‘The NHS will do all it can to ensure cancer care continues as normal for patients and anyone affected will be contacted shortly.’

Minesh Patel, head of policy at charity Macmillan Cancer Support said this would be ‘worrying’ time for patients whose care had been disrupted, adding that they must be adequately supported at this time.

‘It’s vital that these patients receive the support and care they urgently need and deserve, by getting swiftly referred elsewhere to start or continue their treatment as soon as possible,’ he said.

‘The more seamlessly this happens, the better the chances for their treatment outcomes.’

Cancer charities estimate 32,000 fewer patients than expected have started their first treatment in the two years since the start of the pandemic.

This has been due to a combination of hospitals prioritising Covid over regular care and diagnostics, poor access to GPs during lockdown and patients being reluctant to come forward over dear of the virus.

It has been estimated that at current treatment rates, it could be five years before the NHS catches up with cancer cases missed in the pandemic.

Delays in cancer care raise the risk of the disease spreading to other parts of the body, which slashes survival rates and reduces patients’ treatment options.

NHS England data shows only 67.4 per cent of cancer patients had their first treatment within two months of an urgent referral from their GP in March.

The NHS target is that 85 per cent of patients should be treated within this timeframe.

Last month, Dr Liz Bishop, who sits on NHS England’s national cancer board, admitted it was likely the health service would still be missing crucial cancer targets next year.

When asked at a cancer care event last month on if cancer care would return to normal by next spring, she said the prospect was unlikely.

The admission came in the wake of the 1.25 per cent national insurance hike, which is set to raise billions to help the NHS recover from the pandemic and reform social care over the next three years.

The figures come despite Health Secretary Sajid Javid declaring a ‘war on cancer’, pledging to release a Ten Year Cancer Plan to make Britain the best place in the world to receive care.

In its 2022/23 mandate to NHS England, Health Secretary Sajid Javid said the 62-day backlog must be returned to pre-pandemic levels by March 2023.

The Best Password Managers for 2022 to Secure Your Accounts