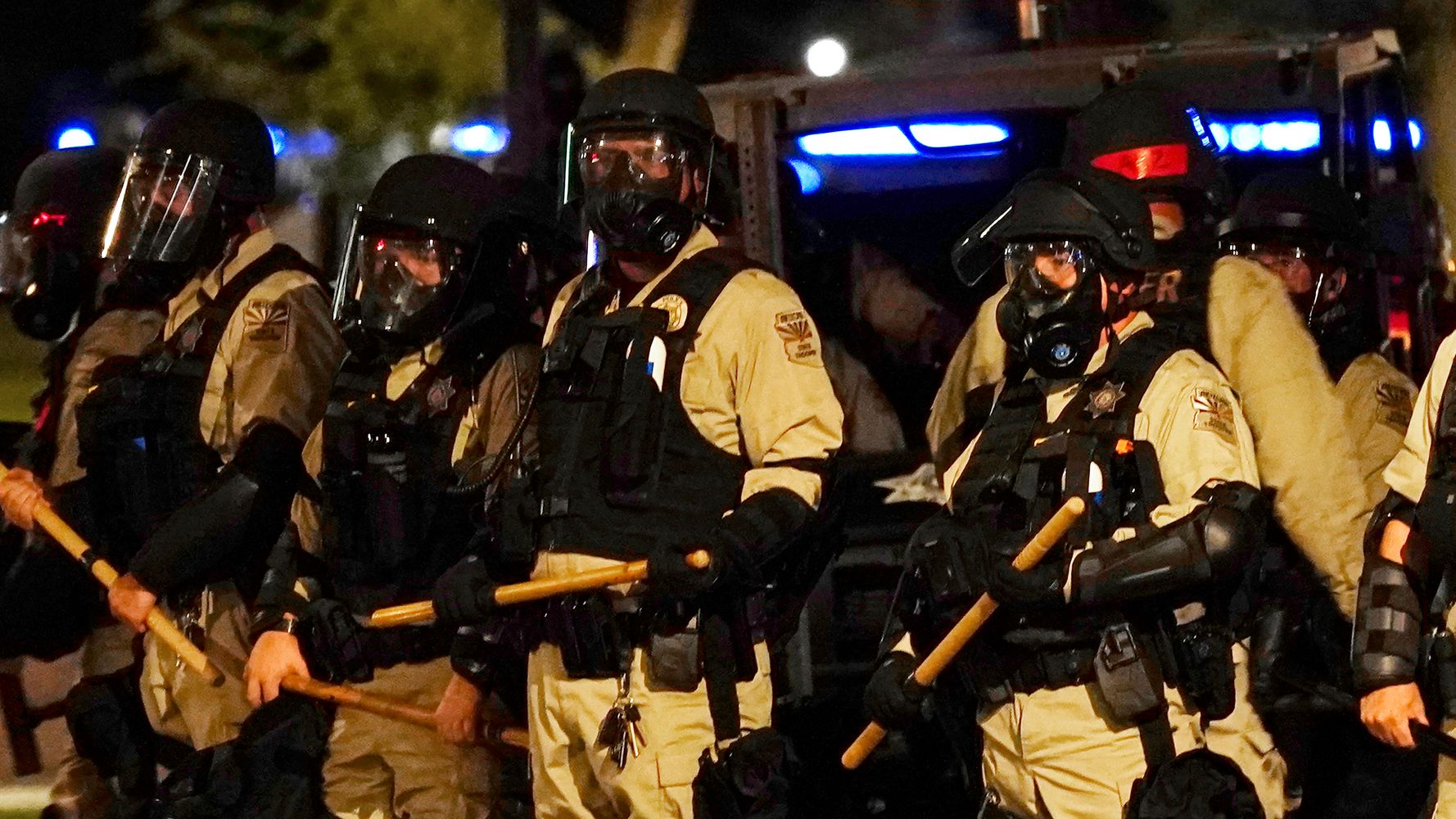 As thousands of pro-choice protesters took to the streets across the U.S. Friday to make their voices heard following the Supreme Court’s ruling overturning Roe v. Wade, some demonstrators were met with violence.

At a protest in Cedar Rapids, Iowa, a pickup truck driver plowed into a group of demonstrators before fleeing the scene.

The unidentified male driver of the Ford truck rammed into several protesters, all of them women. At least one woman was injured after the vehicle rolled over her ankle.

“He tried to murder them,” said Lyz Lenz, a local journalist and witness to the attack. “These women see him coming and a bunch of people put their hands out to stop him. And he just keeps going.”

Video of a protest in Phoenix showed police shooting tear gas from the windows of the Arizona Senate building, forcing hundreds of protesters carrying signs to flee.

Video shared on Twitter by Republican state Sen. Michelle Ugenti-Rita from inside the building showed protesters with signs chanting outside the doors of the state Capitol and banging at the glass doors, but not attempting to enter. After being tear-gassed, protesters moved downtown and were tear-gassed again by police after a monument was allegedly vandalized.

In downtown Los Angeles, journalist Tina Berg was seen on video being violently shoved to the ground by a police officer, who then told her: “I’m trying to protect you.”

During a protest in Providence, Rhode Island, on Friday, a GOP candidate allegedly assaulted his political opponent. Video appears to show Jeann Lugo ― an officer with the Providence Police Department, and a Republican candidate for state Senate ― punching Jennifer Rourke in the face. Rourke is a reproductive rights organizer who is running as a Democrat against Lugo in the state Senate election.

This is what it is to be a Black woman running for office. I won’t give up.pic.twitter.com/ZREDP2dvXY

Lugo was placed on administrative leave with pay Saturday morning pending an investigation, the police department said. Rourke said she plans to press charges against Lugo.

In D.C., abortion rights protesters who showed up at the fenced-off Supreme Court building to make their voices heard were also met by anti-abortion advocates, some who engaged in harassing behavior. One woman told HuffPost reporter Alanna Vagianos, between sobs, that she repeatedly asked an anti-abortion protester ― a man ― to stop following her.

And outside Mississippi’s only abortion clinic early Saturday morning, CNN correspondent Nadia Romero pointed out several men with anti-abortion signs who had come to harass those showing up to the clinic.

“Here we are, outside of the very last standing abortion clinic in the state of Mississippi, and it has not been a good morning here,” Romero said. “It has been confrontational, it has been very threatening. They want to be on TV? Let’s put them on TV.”

The men can be seen on video standing just behind the camera. A police officer stands with his back to the camera.

“They’ve been very confrontational with us and threatening,” Romero continued. “That’s why you see the back here of a Jacksonville, Mississippi, police officer. We have asked them to back up and give us some space, but they have decided to stand and hover over us.”

Romero said police first showed up after one of the anti-abortion men backed his truck up and allegedly hit one of the clinic’s volunteers.