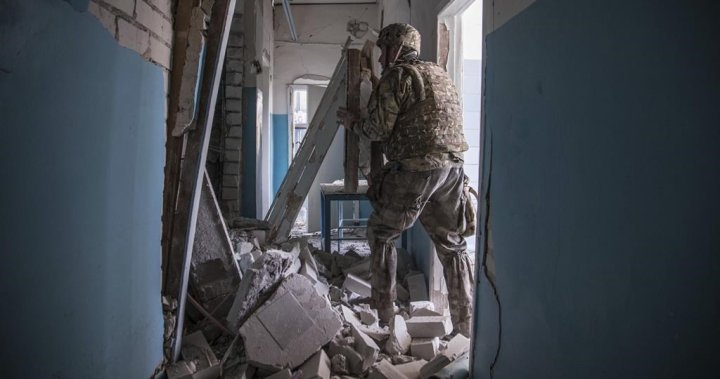 Two British citizens and a Moroccan were sentenced to death Thursday for fighting on Ukraine‘s side, in a punishment handed down by the country’s pro-Moscow rebels.

Meanwhile, Russian President Vladimir Putin appeared to liken himself to conquering monarch Peter the Great and spoke of his country’s need to “take back” territory and “defend itself” as the Kremlin’s forces continued a grinding war of attrition in eastern Ukraine.

A court in the self-proclaimed Donetsk People’s Republic in Ukraine found the three captured fighters guilty of working toward a violent overthrow of power, an offense punishable by death in the unrecognized eastern republic. They were also convicted of mercenary activities and terrorism.

Russia’s state news agency RIA Novosti reported that the men – identified as Aiden Aslin, Shaun Pinner and Ibrahim Saadoun – will face a firing squad. They have a month to appeal.

The separatist side argued that the three fighters were “mercenaries” not entitled to the usual protections accorded prisoners of war. The men are the first foreign fighters sentenced by Ukraine’s Russian-backed separatists.

British Foreign Secretary Luz Truss condemned the sentencing as a “sham judgment with absolutely no legitimacy.” Prime Minister Boris Johnson‘s spokesman Jamie Davies said that under the Geneva Conventions, POWs are entitled to immunity as combatants.

Saadoun’s father, Taher Saadoun, told the Moroccan online Arab-language newspaper Madar 21 that his son is not a mercenary and that he holds Ukrainian citizenship.

Aslin’s and Pinner’s families have contended that the two men were long-serving members of the Ukrainian military. Both are said to have lived in Ukraine since 2018.

The three men fought alongside Ukrainian troops. Pinner and Aslin surrendered to pro-Russian forces in the southern port of Mariupol in mid-April, while Saadoun did so in mid-March in the eastern city of Volnovakha.

The Russian military has argued that foreign mercenaries fighting on Ukraine’s side are not combatants and should expect long prison terms, at best, if captured. Another British fighter captured by the pro-Russian forces, Andrew Hill, is awaiting trial.

As the war raged in a key city in Ukraine’s Donbas region and other parts of the country, Russia’s president drew parallels between Peter the Great’s founding of St. Petersburg and modern-day Russia’s ambitions.

“It’s impossible – Do you understand? – impossible to build a fence around a country like Russia. And we do not intend to build that fence,” the Russian leader said.

Russian forces continued to pound the eastern city of Sievierodonetsk in fierce, street-by-street combat that Ukrainian President Volodymyr Zelenskyy said could determine the fate of the Donbas, the country’s industrial heartland of coal mines and factories.

Moscow-backed separatists have been fighting Ukrainian troops for years in the Donbas and held swaths of territory before the invasion.

“Fierce battles continue in the city itself, street battles are taking place with varied success in city blocks,” Serhiy Haidai, governor of Luhansk province. “The army of Ukraine is fighting for every street and house.”

Sievierodonetsk is part of the very last pocket of Luhansk that the Russians have yet to seize. The Donbas is made up of Luhansk and Donetsk provinces.

3:19
‘I am happy’: Flight full of Ukrainians arrives in New Brunswick for fresh start

‘I am happy’: Flight full of Ukrainians arrives in New Brunswick for fresh start

Zelenskyy called the painstaking fight for the city the “epicenter” of the battle for the Donbas.

“In many ways, it is there that the fate of our Donbas is being decided,” Zelenskyy said Wednesday in his nightly video address.

Defense Minister Oleksii Reznikov said in a Facebook post that up to 100 Ukrainian troops are being killed every day. “We as a country can’t afford to bleed, losing our best sons and daughters,” he said.

_ Haidai said Russian forces are also targeting Lysychansk, the city that neighbors Sievierodonetsk, with “day and night shelling,” and are trying to storm a key road leading from Lysychansk to the southwest.

_ Russian troops are trying to resume their offensive to completely capture the Zaporizhzhia region in Ukraine’s southeast, Ukraine said. Kyiv continues to hold the northern part of the region, including the city of Zaporizhzhia.

Russia claimed it struck a training facility west of the capital, far from the front lines. Russia’s Defense Ministry said it used air-launched missiles against a Ukrainian military base in the Zhytomyr region where it alleged mercenaries were being trained.

There was no immediate response from Ukrainian authorities to the Russian claims. Moscow has repeatedly accused Ukraine of using mercenaries in the fighting.