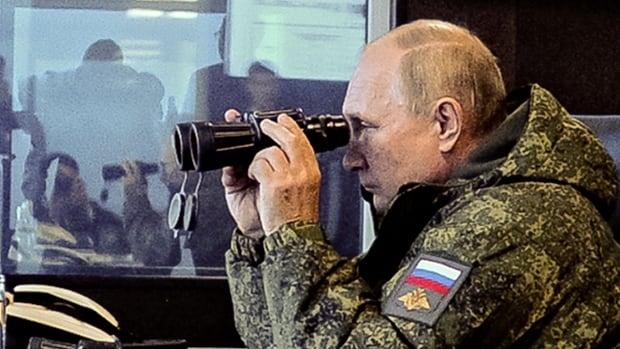 With Russia losing ground in Ukraine’s east and south even as it claims to be annexing it, Kremlin watchers are faced with a pressing question: Will President Vladimir Putin pull the nuclear trigger?

“What we have to do is take it very seriously, watch for signs of actual preparations.”

Kremlin watchers are scratching their heads over Putin’s threats to use “all the means at our disposal,” in part because they don’t see how nuclear force could greatly help reverse Russia’s military losses in Ukraine.

Ukrainian troops aren’t using large concentrations of tanks to wrest back ground, and combat is sometimes for places as small as villages. So what could Russian nuclear forces aim for, with winning effect?

The backlash could also turn Putin into a global pariah.

“Breaking the nuclear taboo would impose, at a minimum, complete diplomatic and economic isolation on Russia,” said Sidharth Kaushal, a researcher with the Royal United Services Institute in London that specializes in defence and security.

Long-range nuclear weapons that Russia could use in a direct conflict with the United States are battle-ready. But its stocks of warheads for shorter ranges — so-called tactical weapons that Putin might be tempted to use in Ukraine — are not, analysts say.

“All those weapons are in storage,” said Pavel Podvig, another senior researcher who specializes in nuclear weapons at the UN’s disarmament think-tank in Geneva.

“You need to take them out of the bunker, load them on trucks,” and then marry them with missiles or other delivery systems, he said.

Other escalations likely before nuclear

“I don’t think there will be a bolt out of the blue,” said Nikolai Sokov, who took part in arms control negotiations when he worked for Russia’s foreign ministry and is now with the Vienna Center for Disarmament and Non-Proliferation.

The city council of Kyiv says it is providing evacuation centres with potassium iodine pills in preparation for a possible nuclear strike.

Potassium iodine pills can help block the absorption of harmful radiation by the thyroid gland if taken just before or immediately after exposure to nuclear radiation.

In an interview with CBC News, Yuriy Sak, an adviser to Ukraine’s defence minister, said the threat of nuclear weapons is immaterial to citizens who are fighting for their survival regardless.

As the dominant global superpower, the United States would in effect decide the response to any Russian nuclear strike.

U.S. President Joe Biden’s option would include a non-military response, responding with another nuclear strike that would risk escalation, and responding with a conventional attack that could involve Washington in a direct war with  Moscow.

Retired general and former CIA chief David Petraeus said that if Moscow used nuclear weapons, then the United States and its NATO allies would destroy Russian troops and equipment in Ukraine — and sink its entire Black Sea fleet.

The Kremlin said on Tuesday that it did not want to take part in “nuclear rhetoric” spread by the West after a media report that Russia was preparing to demonstrate its willingness to use nuclear weapons with a test on Ukraine’s border.

The Times newspaper reported on Monday that the NATO military alliance had warned members that Putin was set to demonstrate his willingness to use nuclear weapons and that Russia had moved a train thought to be linked to a unit of the defence ministry that was responsible for nuclear munitions.

When asked about the Times report, Kremlin spokesperson Dmitry Peskov said: “The Western media, Western politicians and heads of state are engaging in a lot of exercises in nuclear rhetoric right now. We do not want to take part in this.”

Meanwhile, Putin may finalize his plan to annex four Ukrainian regions today, even as his forces are being pushed back by Ukraine.

The upper house of Russia’s parliament earlier on Tuesday voted to approve the incorporation of Donetsk, Luhansk, Zaporizhzhia and Kherson, which, taken together, represent around 18 per cent of Ukraine. The Kremlin said that Putin’s signature, the final stage in the process, was likely later in the day.

Russia does not completely control any of the four regions it says it is annexing — and the Kremlin has said it has yet to determine the final borders of the annexed territory.

Russian forces in the eastern Donetsk and southern Kherson regions have been forced to retreat in recent days and appear to be struggling to halt a well-equipped Ukrainian army. Moscow is hoping the “partial mobilization” it announced two weeks ago could help turn the tide.

Defence Minister Sergei Shoigu was cited by the RIA news agency on Tuesday as saying that Moscow had so far called up more than 200,000 reservists out of a planned 300,000 men.

Many Russian men have fled the country rather than fight in Ukraine however, and Russian lawyers say they are working flat out to offer advice to men who want to avoid being drafted. Some Russians are making journeys of thousands of kilometres by car, train and plane to escape.

In their biggest breakthrough in the south since the seven-month war began, Ukrainian forces recaptured several villages in an advance along the strategic Dnipro River on Monday, Ukrainian officials and a Russian-installed leader in the area said.

Ukraine has released little information about its apparent gains, in keeping with a policy of withholding details about ongoing advances. President Volodymyr Zelenskyy said in his nightly video address that Ukraine’s army had seized back towns in a number of areas, without giving details, and that heavy fighting was underway in several locations.

In a decree on Tuesday, Zelenskyy formally declared any talks with Putin “impossible,” while leaving the door open to talks with Russia if it got a new leader.

The Kremlin said what it calls its “special military operation” in Ukraine would not end if Kyiv ruled out talks, adding that it “takes two sides to negotiate.”

The U.S. announced it’s providing an additional $625 million US in military aid to Ukraine, a package that includes additional advanced rocket systems credited with helping the country’s military gain momentum in the war.

Body of missing TikToker Tea Wright-Finger, 19, found as she vanished without a trace…