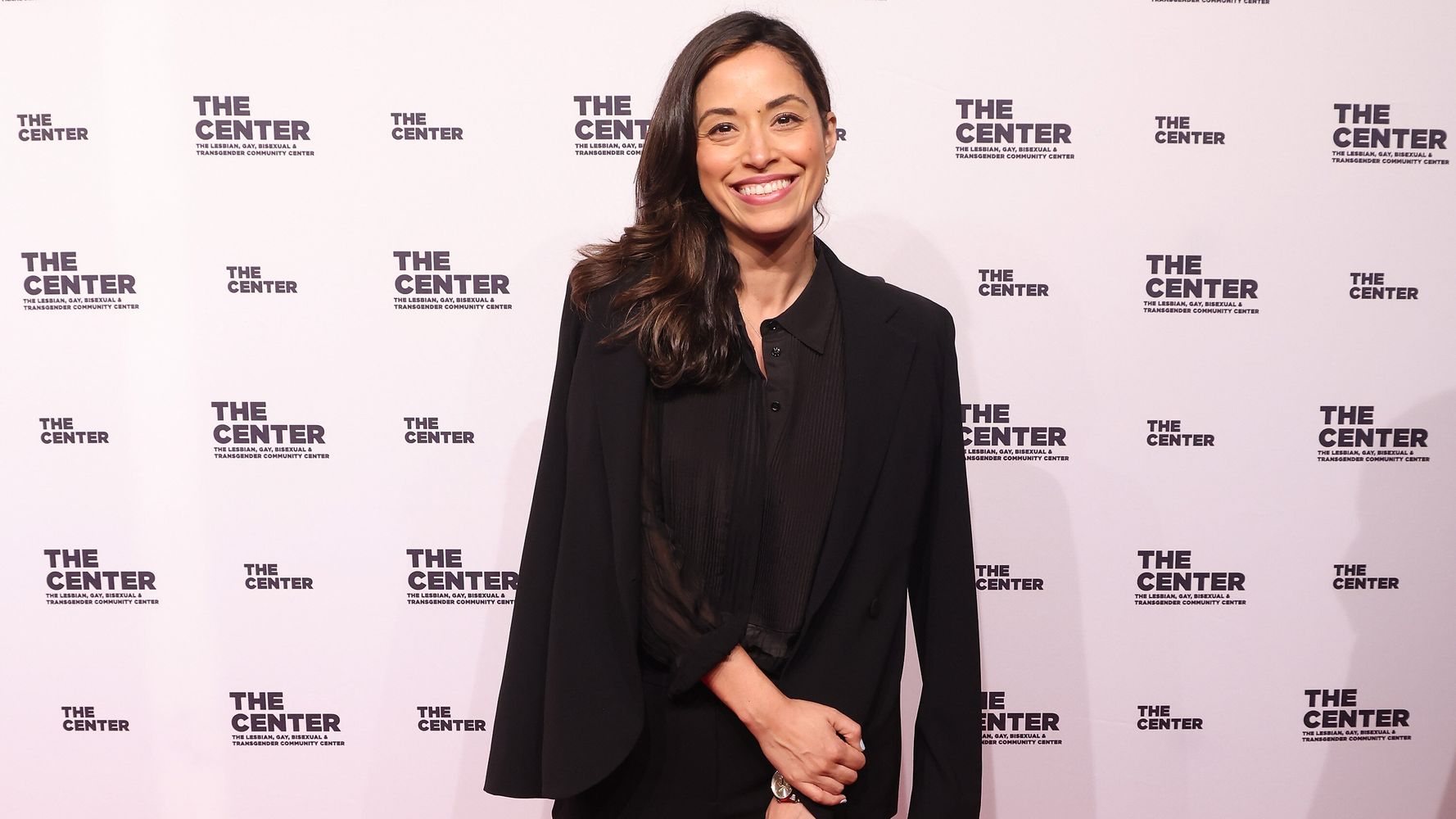 NEW YORK ― State courts may have snuffed out New York Democrats’ gerrymandering dreams, but for some of the party’s up-and-comers, the final, nonpartisan district lines still hold promise.

Nowhere is that truer than in the Empire State’s entirely new 10th Congressional District, which comprises lower Manhattan and a cluster of contiguous neighborhoods in central and South Brooklyn.

A number of hopefuls pounced at the rare chance to run in an open, overwhelmingly Democratic seat. Former New York City Mayor Bill de Blasio, Assemblymember Yuh-Line Niou, and U.S. Rep. Mondaire Jones are just three of the candidates who have already declared their intention to run in the Aug. 23 primary. Rivera recently picked up the endorsement of one of Jones’ colleagues in the House, Rep. Nydia Velázquez (D-N.Y.).

HuffPost is running an interview series with the 10th District candidates, and our first sit-down was with New York City Council Member Carlina Rivera in Hamilton Fish Park.

The Lower East Side location, just across the street from the Section 8 housing where she grew up, exemplifies Rivera’s deeply local reasons for running. Rivera played small forward on the park’s basketball courts as a youngster and now uses her perch on the City Council to fund a youth basketball tournament there.

Unlike other candidates with clear national constituencies and ideological lanes, Rivera, the daughter of a single Puerto Rican mother who migrated to the mainland, eschews labels and pet policy issues. She and her husband, Jamie, live just north of New York 10th’s boundaries, but she is running as a native daughter of the Lower East Side’s working-class Latino precincts eager to continue fighting for her neighbors.

She is also a sneakerhead who practices hot yoga and enjoys touring the middle of the country with her husband, whom she met while serving on Manhattan Community Board 3. For the couple’s next road trip, they’re flying to Cleveland and then driving from there to Detroit.

HuffPost spoke with Rivera about how she got into politics, why she’s running, and where she falls on the ideological spectrum.

This interview has been edited for clarity and length.

Tell me a little bit about how you got involved in politics.

Being a part of local programs — going to the library, playing ball. I got involved because we would always be talking about what’s going on in the neighborhood, what’s important. My family and the families that I grew up with wanted to know what was free, what was affordable. So we would always be sharing information. And that’s when we would learn when things were changing or some of our favorite small businesses were closing.

The campaign that I was really a part of that got me interested in local politics was the Essex Crossing construction project on Delancey Street. We wanted to make sure that affordable housing and those Essex Street market vendors were a core part of the redevelopment plan that was going on.

We decided as a community what was absolutely essential when it came to this project. We wanted it to be community-led development with our voices at the table. We said it has to have affordable housing. We wanted an open space. We wanted to make sure there was local hiring for the jobs and that there was a seamless relocation of the Essex Street Market vendors. In the end, I thought there was a good balance there.

How do you see yourself replicating that kind of work in Congress, which is obviously a different body than the City Council?

What I’m excited about and what I think an effective member of Congress does well is that they’re able to look at the local issues and things that are happening in their community. They have their ear to the ground and they can tie it into a national dialogue and bring those national resources for local problems.

So whether it’s supporting open spaces in the face of climate change, and looking to build a greener infrastructure, whether it’s transit dollars, health care dollars — all of this I think is very, very related. Looking at issues intersectionally and with an equity lens has been something that I’ve done on the council. When we discuss the issues that are affecting people in NY-10, those are universal issues that are felt across the country: housing insecurity, health care, public safety, climate change — things that we have to act on.

“We can’t arrest our way out of the crime spike.”

Your mother is a unionized civilian employee for the New York Police Department. What are your conversations with her about policing like?

We can agree that if the presence of police and a big policing budget were enough to stop crime, there would be very, very different circumstances in this city [which has a large police force].

But policing alone is not enough. That’s why the strategies have to be based on community investment. There has to be community-led programming and services.

We can’t arrest our way out of the crime spike. It just hasn’t worked and many of the people who are incarcerated really need services that focus on their health care and that are really trauma-informed.

Murders have gone down nearly 9% from this time in 2021. Obviously, that’s still way higher than it was in 2019. But can you attribute some of the progress to the greater presence of police in the subways or other things that Mayor Eric Adams has tried?

It really has to do with our gun control issues. The least that we can do for the families of people who have been killed in our supermarkets and in our churches and in our schools is to pass commonsense gun-control legislation. This hits close to home.

Even with New York having some of the strongest gun control laws in the country, there is still a real ability to bring those guns from other places and affect the families here as well.

It takes police to enforce gun control laws though, right?

But there have to be complementary strategies that are community-led that include violence interrupters, and treat gun violence as a public health issue. And we have some great programs right here in New York City. We have Avenues for Justice, which is a program that’s a national model for alternatives to incarceration. We also have the Stand Up to Violence program in Jacobi Hospital where there is intervention right there with the gun violence victims and with credible messengers, people from the community who are asking, “How did they get here in the first place?”

So there are things that are working. Those are some of the tools that we have to use, in addition to an effective police presence.

What do you think of the job Mayor Adams is doing overall?

What I like about him is that he’s a cheerleader for the city — no question about that.

Some of the issues like the spike in crime are difficult to navigate and we have a lot more to do on that.

You ran for City Council speaker last year and lost. Why were you unsuccessful?

I’m a very independent person. And I think I’ve shown that in my decisions that I’ve made and how I operate:first and foremost, taking care of my community.

For council speaker, I think I built a really great coalition of people that knew that I would be a great leader — someone who was a listener, who was very pragmatic and compassionate. My independence maybe just led me down a different path.

My record speaks for itself. As the Supreme Court’s preparing to gut Roe v. Wade, I was preparing New York for a post-Roe world establishing the nation’s first abortion access fund, looking at how to lead on issues related to climate, transit and public safety. That sort of progress is important for all cities and municipalities.

I remain eternally, cautiously optimistic on what the makeup of Washington will be like.

But we also have to support our local towns and cities. There are a lot of similar interests among some of the candidates. However, my experience and what I’ve been able to do on the council, what I plan to do in Washington, the local support that I have — NY-10 voters want that local perspective in Washington. I’m a homegrown candidate, and I think all of that is unparalleled.

What is your relationship with progressive groups like the Working Families Party? Would you seek their endorsement?

I have a great relationship with the Working Families Party and I’ll certainly be talking to them about supporting my race. We have similar ideals and values and we have campaigned for a lot of the same candidates.

Do you have any thoughts on Rep. Mondaire Jones moving to the city to run?

I don’t care if you’ve been here two weeks or forever. New York City is the welcoming city. That’s our whole history — welcoming different people in, welcoming waves of immigrants.

Including members of Congress from the suburbs?

“Housing has to be a priority. I believe it’s a human right.”

Do you think there’s too much local resistance to new real estate development, especially when it comes to units for low-income and vulnerable people?

Housing has to be a priority. I believe it’s a human right.

How would you advocate for Puerto Rico in Congress?

I have so many memories there, and very recently, of what my family is going through there — every time we can’t reach them, because the power is out, or a disaster has devastated the infrastructure.

The people of Puerto Rico should have the resources and the support for self-determination to figure out what they want to do. So I know there’s legislation like that in Washington right now that is supported by multiple Puertorriqueños that would allow them to vote on their status, be it for independence, statehood, or another alternative.

The self-determination piece is so, so important. Taxation without representation is wrong. Puerto Rico does need to write its own story.

What do you think of running against former Mayor Bill de Blasio?

The question that comes to mind is: Why is each candidate running? I’m running on a great record, as a homegrown candidate. And whenever I leave my role as a council member I’m going to be proud of my legacy.

“They cheat like hell, these people”: Trump airs 2020 grievances in…