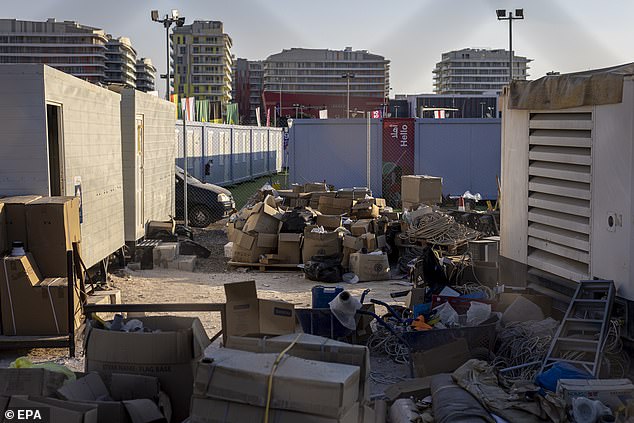 Football fans arrived at Fan Villages in Doha ahead of the major football tournament – only to find migrant workers still working on completing the corrugated box rooms.

Rubbish has also continued to pile up around the containers, while fans have complained of being cramped in their tiny rooms and having to wait for excessively long periods to check in.

Last night, a crowd of guests waiting in line at the Free Zone Fan Village said they couldn’t get their rooms because the reception desk wasn’t sure who had already checked in.

But now, Qatari officials have offered the disgruntled fans a full refund and alternative accommodation.

Officials from the Qatari Supreme Committee blamed the delays in checking in fans and poor standards on ‘owner and operator negligence’.

Qatar World Cup officials are offering full refunds and new accommodation to furious football fans who have been staying in ‘rip-off’ £185-a-night metal containers. Pictured: Rubbish is piled up at the Fan Village Cabins Rawdat Al Jahhaniya accommodation base on Tuesday 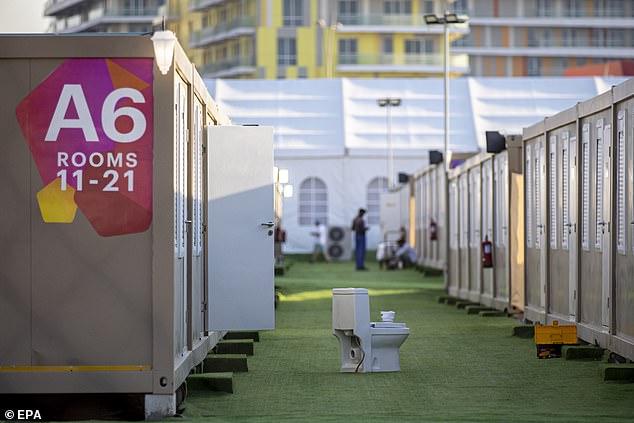 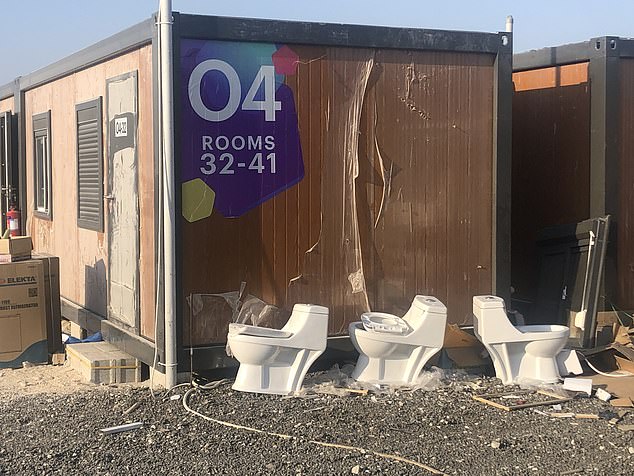 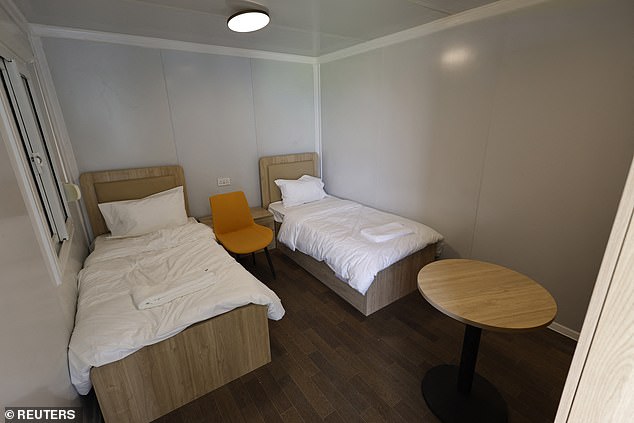 A Qatari Supreme Committee spokesperson told MailOnline: ‘We are aware that a number of fans have faced delays checking into select Fan Village accommodation due to owner and operator negligence.

‘A section of units in these facilities, which are delivered and managed by different private entities, have not met the required standards that were advertised to fans.’

The spokesperson added: ‘While these sites are managed by independent commercial entities, rectifying these issues remains the utmost priority for the Supreme Committee.

‘Full refunds are being offered to fans severely impacted by this issue as well as alternative accommodation which will be free of charge for the duration of their stay.’

The Rawdat All Jahhaniya Fan Village was still under construction on Tuesday, despite the tournament beginning days earlier.

Uninstalled toilets and rubbish were still spread across the camp, prompting anger from many fans.

Some cabins were still completely unfurnished shells when fans arrived earlier this week.

Unplumbed toilets were stacked outside as workers hammered and drilled together cheap flat-pack beds and wardrobes to furnish them.

‘When we went to our room, it was all messed up,’ said Aman Mohammed, a 23-year-old from Kolkata, India, at the common area on Wednesday.

He said he waited two hours under the searing sun for a cleaner to arrive the day before. ‘It was stinking so bad, like a bad bathroom. It was pathetic.’ 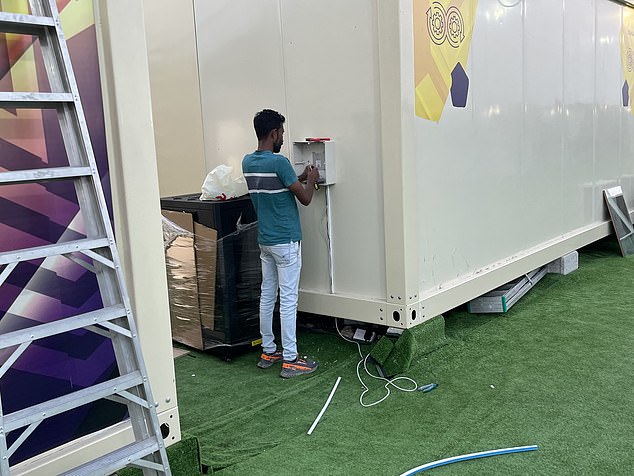 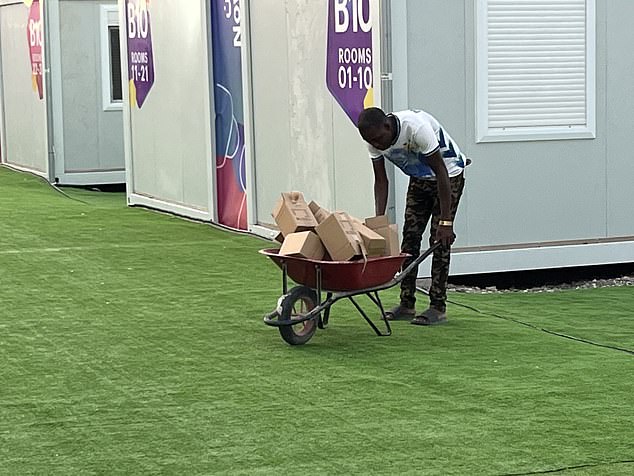 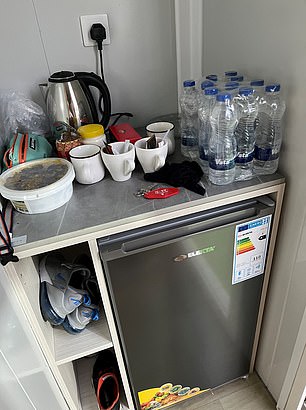 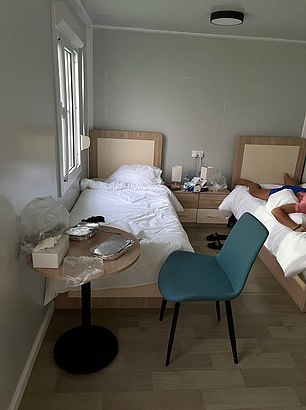 Another fan, Milad Mahmooditar, 32, from Tehran, arrived at the Rawdat All Jahhaniya fan camp to find his cramped container surrounded by rubbish.

He said: ‘It is ridiculous that I have to pay so much money to stay in this tin can.

‘I am 6 feet tall and my bed is too small. There is no room to move and the air-conditioning unit makes so much noise that you cannot sleep.

‘The bathroom isn’t much of a bathroom and you can hardly move without falling over the small table or kicking the bed.

‘This is not the way to treat visitors to any country. We have paid so much money to get here.

‘I’m a businessman, but I’m not rich. I’ve spent a lot of money to come here and I expect to be treated much better than this.

‘I am sorry about this and I am angry. Maybe it’s okay for the Qatari people who are rich and live in luxury houses for. Me, this is not okay.’ 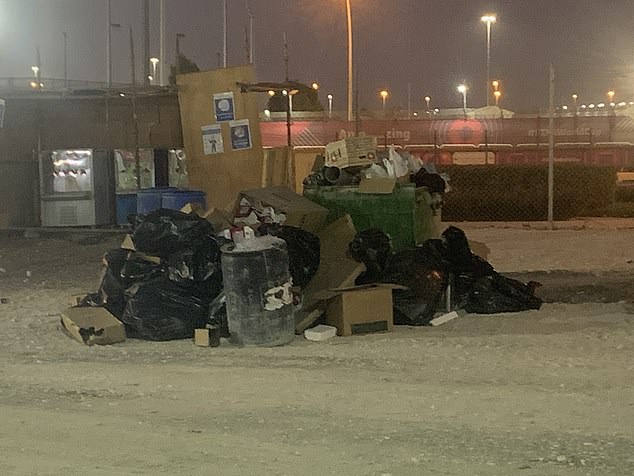 But soaring prices have forced many thrifty fans into remote desert campsites and giant fan villages in Doha’s outer reaches.

Footage and images showed piles of rubble and sand, ripped up turf and industrial machinery still on-site at the Rawdat Al Jahhaniya fan village, which will be home to thousands of England and Wales fans for the World Cup.

Along with abandoned forklift trucks and a digger next to hundreds of sea containers, promised amenities like a cinema screen and tennis court are also not present, according to The Guardian.

The ‘fitness centre/gym’ appears to be a few pieces of outdoor equipment close to the main entrance and road of the fan village, which is managed by the operator Al Emadi and next to the Ahmad bin Ali stadium.

The newspaper additionally reported that by the side of a tent, that will be used as a mosque during the tournament, is a giant crater, while a portable Starbucks van and a large tented dining hall will serve as catering for the hungry football fans.

Inside the cabins, which opened on Friday and costs £185 a night for a double cabin for two, tiny air-conditioning units are unable to cool the space during the day and rattle too loudly at night to be usable.

Those paying to stay in the Rawdat Al Jahhaniya accommodation, that will sleep as many as 60,000 people, can look forward to spartan interiors with either two single beds or a double bed, toilet, mini-fridge and tea and coffee-making facilities.

It is the latest controversy for the tournament which has already attracted complaints over cracks and holes inside stadium grounds and a last-minute U-turn to ban beer from stadiums that left fans fuming.

More than a million people are expected to descend on the small desert peninsula – with a population of just 300,000 excluding expats and migrant workers – over the course of the tournament, which will last almost a month from November 20 until December 18.

Black Friday buys to save money on your energy bill