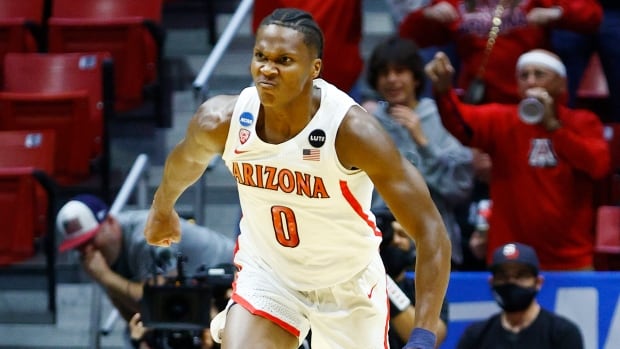 It’s no longer a question of if.

When it comes to Canadians in the NBA draft, the relevant inquiries are now “how many” and “how high?”

The country has consistently produced impactful players in recent years, from Jamal Murray’s breakout in the 2020 bubble to former No. 1 pick Andrew Wiggins’ star turn with the Warriors in the 2022 Finals.

In the upcoming NBA draft, four more Canadians are set to enter the league, and two are widely projected to be picked in the top 10.

Shaedon Sharpe, Bennedict Mathurin, Andrew Nembhard and Caleb Houstan travelled different routes to Thursday’s life-changing event, but all four could wind up at a similar destination: playing a key role on a contending NBA team.

Sharpe’s journey is nearly unprecedented in recent years. The London, Ont., native was granted college eligibility in January and joined Kentucky, with the original intention to learn with the team and prepare for the 2023 season.

But the intrigue surrounding the former top-ranked high schooler within NBA teams grew, and Sharpe, now 19, declared for the draft.

“I think it’s a huge positive. … In the NBA draft, you don’t want to be the guy that missed out on a superstar, and he’s got superstar athleticism.”

The smooth-shooting six-foot-six point guard will be one of few prospects to enter the NBA straight out of high school since the “one-and-done” rule was instituted for the 2006 draft.

Rather than risk injury or poor play at Kentucky next season, Sharpe appears headed for selection in the top 10. He’ll take whatever lumps may come in the NBA along with a professional paycheque.

And all that potential could come out against the best players in the world. Brown said the ideal landing spot for Sharpe would be on a rebuilding team like the Oklahoma City Thunder, who could provide the opportunity to work through mistakes.

The Montreal native consistently improved with each season of competitive basketball, Brown said.

“I don’t think he’s ever going to be a superstar, but I think his ceiling is an all-star for sure. … Can he be the second-best scorer on a playoff team? Maybe. He’s a worker and a high-character kid, by all accounts.”

Brown said Mathurin, at six-foot-six, has drawn comparison to wing players Khris Middleton and Jaylen Brown, who each played key roles for Finals teams the past two seasons.

Though Mathurin’s defence wasn’t up to those players’ standards in college, his ability to improve was shown on offence, where he leapt from 10.8 points per game as a freshman to 17.7 as a sophomore without seeing a significant drop in efficiency.

The 20-year-old also shone during the Wildcats’ run to the Sweet 16 in the NCAA Tournament, including a 30-point performance in an overtime win the round prior.

“I think he showed he was a monster. … I think that big game showed something special there, like a shot maker that can make the big shot,” Brown said.

Mathurin’s steady growth shows his NBA floor should be a role player, while his primetime performances mean he could ascend even higher.

For Sharpe, the gap is much wider, but the superstar appeal is tantalizing.

Meanwhile, Brown said Nembhard and Houstan should be selected either late in the first round or early in the second — right around where the Toronto Raptors pick at No. 33.

He said Nembhard, of Aurora, Ont., was the more likely of the two to wind up as the second Canadian ever drafted by the Raptors.

“Is he a Raptors type player like the rest of their guys? No. But do they need a backup guard that’s stable, that has size, that has some switchability and that they can improve his shot? For sure.”

Nembhard, 22, played four full seasons in college. After struggling at Florida for two seasons he transferred to Gonzaga, where he often played a key role on one of the top offences in the nation alongside 2021 No. 5 pick Jalen Suggs and projected 2022 top-three pick Chet Holmgren.

The Canadian is a steady ball-hander with limited athleticism but a high basketball IQ.

“It makes up totally for it. And that’s why after you saw the way he played with pace [at Gonzaga], how well he played with this team and how much they won,” Brown said.

Nembhard’s style of play may also make him a good option on the national team in the near future as someone who can get the ball in the hands of scorers Shai Gilgeous-Alexander and Jamal Murray with room to attack.

That sort of steadiness also makes Nembhard a good fit with contending teams like the Celtics and Warriors who are picking late in the first round and could use an immediate contributor.

Houstan, on the other hand, may be better served, like Sharpe, on a team where he can play through his mistakes.

Once a highly touted prospect himself, the Mississauga, Ont., native struggled in his lone season at Michigan, displaying limited athleticism and playmaking chops.

Some were surprised by the 19-year-old’s decision to stay in the draft, when he could have honed his game and improved his stock further with one more year with the Wolverines.

Brown said Houstan primarily served as a floor-spacing shooter at Michigan — a role he ably fulfilled with 35.5 per cent three-point shooting. But he said his “high character” should mean there’s more to come.

“[He’s] willing to do the dirty work and you know he can attack a closeout well or is a good jump shooter when he’s got a little more space. But he’s not an elite athlete and I think he’s definitely got room to improve,” Brown said.