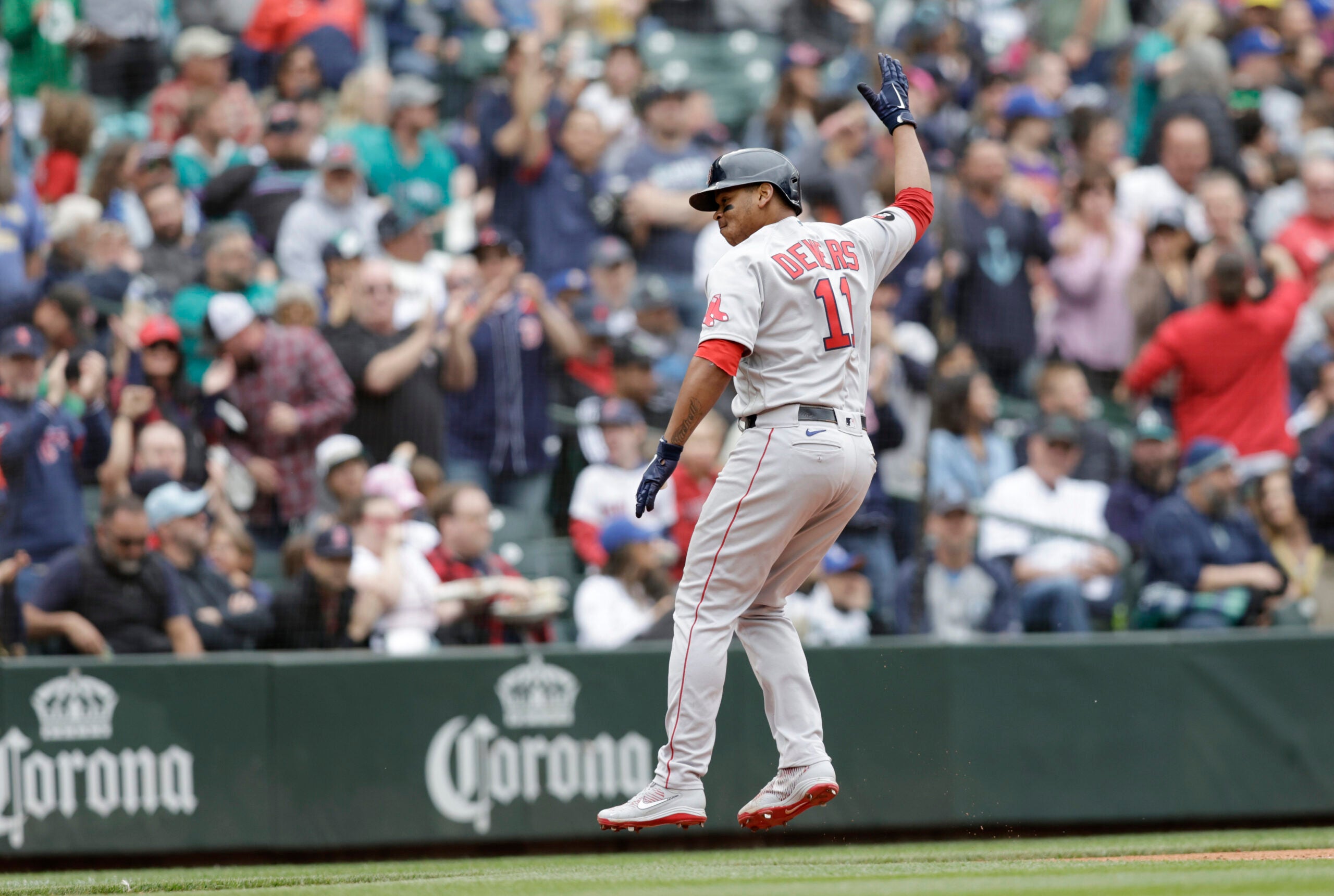 SEATTLE (AP) — Rafael Devers stunned his teammates, his manager and his opponent. Pitches that far out of the strike zone are not supposed to end up over the fence.

“Unreal,” Boston manager Alex Cora said. “It’s just hand-eye coordination, power. You’ve got to be perfect to hit a ball like that, and he was for this one.”

Devers hit a two-run homer in the eighth inning, spot starter Kutter Crawford and five relievers combined on a one-hitter, and the Red Sox beat the Seattle Mariners 2-0 Sunday.

Boston closed out a successful West Coast swing by shutting down Seattle’s offense, allowing only Luis Torrens’ single in the fifth inning. The Red Sox finished 8-2 on a 10-game trip.

They can thank Devers for providing the needed blow on a day offense was difficult to come by for both sides.

Seattle was hoping Devers wouldn’t even get to the plate in the eighth, but reliever Paul Sewald hit Rob Refsnyder on a 2-2 fastball.

Sewald was ahead 0-2 to Devers and threw a fastball well outside the strike zone. Devers got his barrel to the pitch and drove it into the Red Sox bullpen in left for his 14th homer.

“I swing at everything and the pitch was a little closer than you think, and I was able to hit it out of the ballpark,” Devers said.

It was the second straight day Sewald (3-2) allowed a home run after Bobby Dalbec’s connection in the ninth inning Saturday.

“There might be one or two hitters in this league, left-handed hitters, that can square that ball up, let alone hit it out of the ballpark,” Seattle manager Scott Servais said. “You have to tip your hat.”

Tyler Danish (2-0) was the third Boston reliever and earned the victory. John Schreiber got help in the eighth from a terrific diving catch by Refsynder in right field to rob Ty France of extra bases.

Tanner Houck pitched the ninth for his second save. It was the fourth shutout for Boston during its trip.

Crawford was recalled from Triple-A and started after Garrett Whitlock landed on the 15-day injured list. The right-hander threw five innings of one-hit ball, striking out seven. Control issues with four walks kept him from likely getting a chance in the sixth.

Crawford kept Seattle hitless until Torrens lined a single with two outs in the fifth. Jesse Winker followed with a walk, but Crawford struck out France to end the inning for his final batter.

“I was mixing my pitches pretty good. Even when I was behind in the count I was able to throw that cutter and get weak contact or get back in the count,” Crawford said.

Boston’s pitching performance also spoiled the best start of the season from Seattle’s Robbie Ray. Mixing in a fastball with more downward movement to go with his normal four-seam fastball and slider, Ray finished seven innings for the first time since opening day. He struck out four, issued one walk and induced plenty of weak contact.

The only hits Ray allowed were a double to Xander Bogaerts that could have been ruled an error, a bloop double for J.D. Martinez that hit off the glove of France and a broken-bat single by Alex Verdugo.

“I just kept them on their heels the whole time,” Ray said.

Red Sox: RHP Nathan Eovaldi was placed on the 15-day injured list with lower back inflammation prior to Sunday’s game. Eovaldi returned to Boston to receive treatment, and an IL stint was determined to be the best option. Eovaldi is 4-2 with a 3.16 ERA in 12 starts. … LHP James Paxton threw a 15-pitch bullpen Saturday, continuing his recovery from Tommy John surgery. … LHP Chris Sale (ribs) is expected to throw to hitters Monday in Florida.

Mariners: RHP Ken Giles (finger) threw one inning of relief for Triple-A Tacoma on Saturday, giving up two hits and one run as part of a rehab assignment. Servais was unsure if Giles would be ready to be added to Seattle’s roster during the next series.

Red Sox: After a day off, Boston returns home to face Oakland on Tuesday. RHP Nick Pivetta (5-5, 3.78) will start the series opener against the A’s.

Mariners: Seattle opens a three-game series with AL Central-leading Minnesota on Monday. RHP Chris Flexen (2-7, 4.35) will start the opener. Flexen has allowed three earned runs or fewer in each of his last three starts.

What is This Disease That Justin Bieber is Suffering From