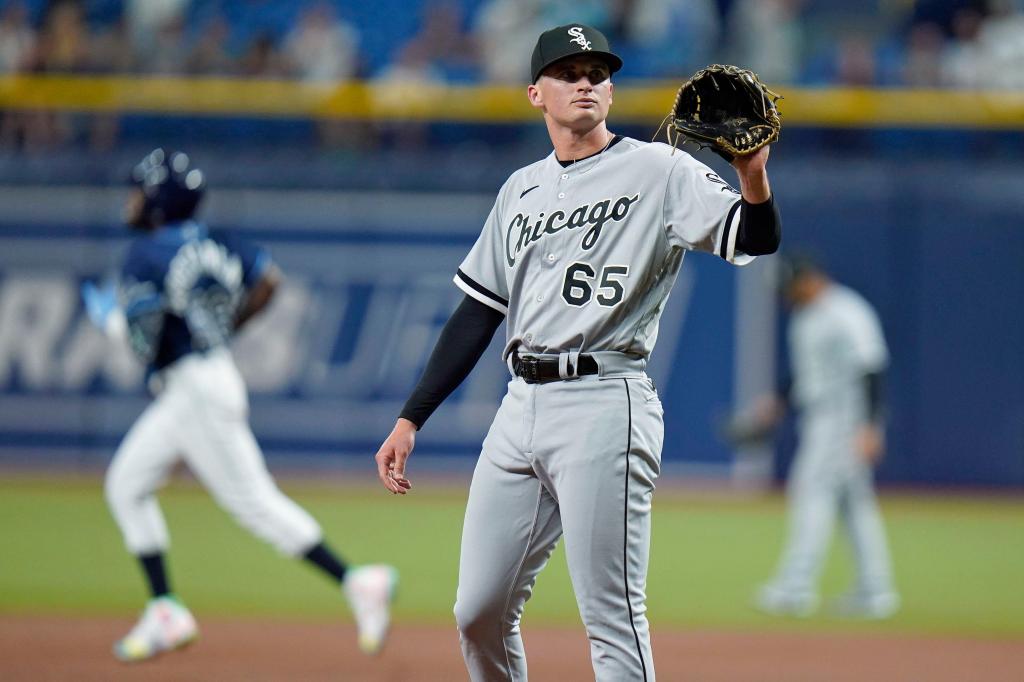 Davis Martin got a call around 2 p.m. Thursday.

He wouldn’t be starting that evening for the Charlotte Knights, the Triple-A affiliate of the Chicago White Sox. He would be rejoining the big-league club.

Martin started Friday after the Sox placed Vince Velasquez on the injured list with a left groin strain.

The right-hander recovered from a rocky first inning to keep the Sox close. But the team couldn’t come through in late opportunities, falling 6-3 in front of 8,930 at Tropicana Field.

The Sox loaded the bases with two outs in the ninth, but reliever Colin Poche struck out Luis Robert to end the game. The Sox lost their fourth straight and have dropped seven of their last nine.

“No one is packing it in here but we’re in the results business,” Sox left fielder AJ Pollock said. “We know we have to scratch out some wins.”

Friday had the makings of a quick night for Martin, who surrendered four runs in the first.

Ji-Man Choi had a sacrifice fly. Harold Ramirez drove in a run with a single and scored on Randy Arozarena’s two-run homer.

Martin bounced back, at one point retiring eight straight, and didn’t allow a run the rest of his outing.

He exited after 5⅓ innings, allowing the four runs on five hits with one strikeout and three walks.

“(I) started mixing in some other pitches, kind of getting some quick outs,” Martin said.

“Early I think we were fastball-slider heavy,” Martin said, “and then mixing in those two pitches both sides (of the plate) I think helped a lot.”

Martin (0-2) allowed one run on five hits in five innings in his debut May 17 in the second game of a doubleheader at Kansas City. He said he took a lot away from his second big-league start.

“Statistically, (Friday) wasn’t a great outing, but I think I learned a lot about how to pitch today,” Martin said. “I learned a lot of adjustments that are going to help me down the road with the help of (pitching coach Ethan) Katz and (catcher Yasmani) Grandal.”

“He made the adjustment,” La Russa said. “You get behind like that and a lot of bad things happen sometimes. You get distracted, you start doing less or more. And he just pitched. That’s impressive.”

The Sox scored once in the third and got within 4-2 with a solo home run by José Abreu in the sixth. Abreu went 2-for-4, extending his hitting streak to 12 games.

Rays starter Shane McClanahan (6-2) exited after allowing the two runs on six hits with eight strikeouts and no walks in six innings. He turned it over to Rays bullpen, which worked out of several jams.

The Sox had runners on first and second with one out in the seventh, but Matt Wisler got a grounder for a force out and struck out Andrew Vaughn in a nine-pitch at-bat.

The Rays made the most of their chances in the bottom of the inning, scoring twice to push the lead to 6-2.

Robert and Grandal had back-to-back singles for the Sox with two outs in the eighth. Jake Burger grounded to shortstop for the inning’s final out.

The Sox got a run in the ninth and brought one of their more dangerous hitters to the plate in Robert. But Poche made the big pitches to continue the Sox slide.

“What I look at is we got down by four and kept playing until the end,” La Russa said. “All that gets a lot of high points from me.”

“You don’t know when it’s going to turn but if you do the right things, they’ll turn,” Pollock said. “We just need to play good baseball. String together some good at-bats. It would be nice to have a 10-run game and just blow somebody out. But that’s like saying I’m going to go 4-for-4. It’s tough.”