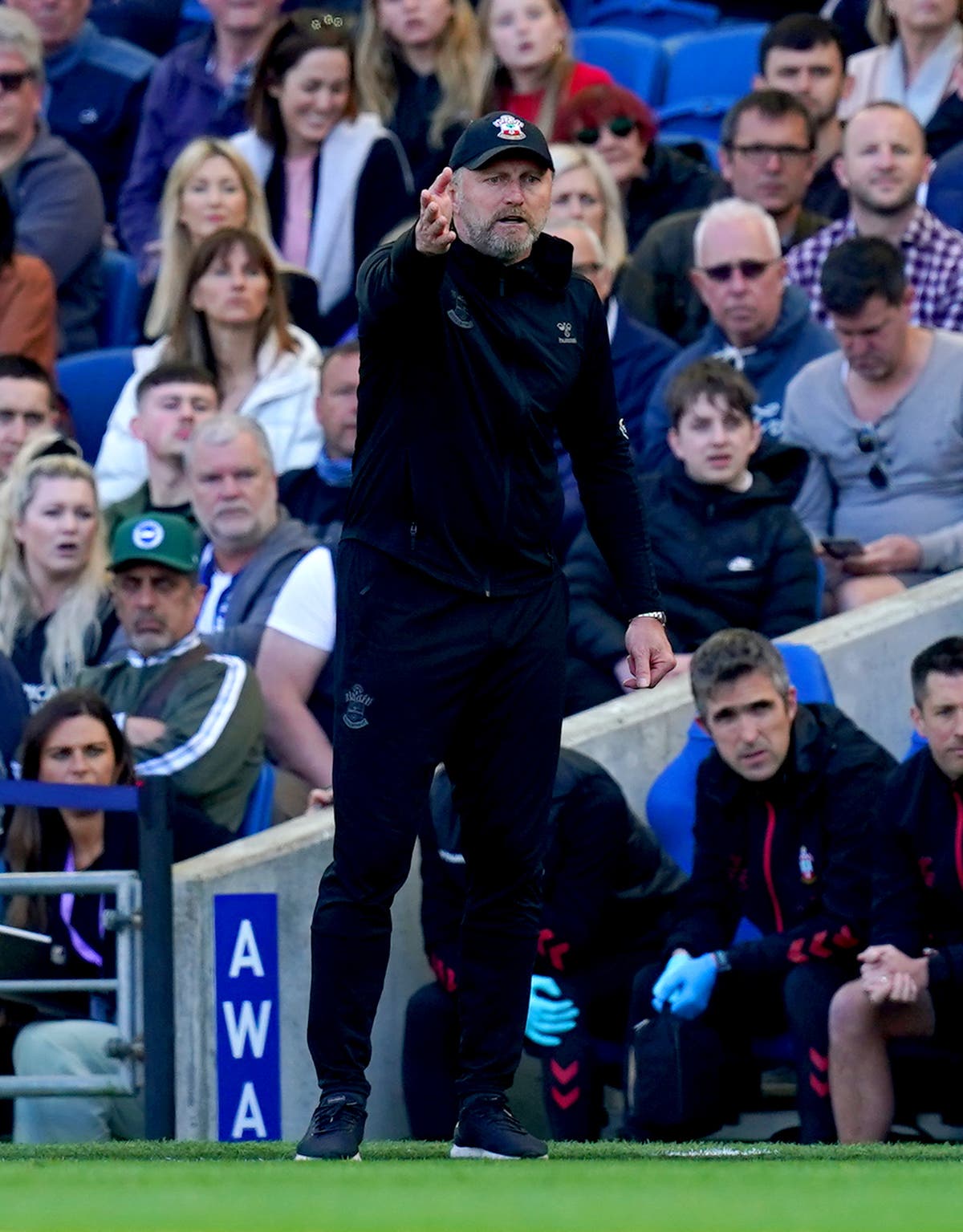 Ralph Hasenhuttl believes Southampton’s thrilling fightback at Brighton proves his players are not “on the beach” on a day he lost defender Tino Livramento to a serious knee problem.

Saints overcame the setback of Livramento’s nasty first-half injury and falling two goals behind at the Amex Stadium as a fine James Ward-Prowse brace salvaged a 2-2 Premier League draw.

Danny Welbeck’s early finish and a calamitous own goal from Mohammed Salisu looked set to condemn Hasenhuttl’s men to a sixth league defeat from eight games.

But, with the visitors’ frustrations heightened by Livramento striking a post and then being carried off on a stretcher at 1-0 after twisting awkwardly, Ward-Prowse’s two strikes from distance earned a deserved point.

Saints, like hosts Albion, retain hope of a top-half finish and manager Hasenhuttl was delighted with his players’ response to adversity.

“We saw a very intense game; a very, very horrible start for us with the goal after two minutes, a chance for an equaliser that hits the post, a very, very bad injury and a second goal where we kick it in our own goal,” said the Austrian.

“There is not much more to climb than we had first half.

“You said last week that the guys seem to be on the beach. I think today they showed they are not, that they want to achieve more than only 40 points.

“Today we showed a very, very good reaction and it definitely helped that we made it 2-1 before half-time with a beautiful free-kick.”

Ward-Prowse claimed the 14th top-flight free-kick goal of his career in the fourth of five added minutes at the end of the first half in which Livramento received lengthy treatment on the pitch after collapsing as he attempted to challenge Seagulls midfielder Enock Mwepu.

The Southampton skipper bent the ball in via the left post, before drilling home from the edge of the D early in the second period in front of the travelling fans.

“The first free-kick was amazing. It’s super tough for every goalkeeper in the moment, they don’t know what is coming up,” Hasenhuttl said of Ward-Prowse, who is four behind David Beckham’s Premier League record of 18 goals from direct free-kicks.

“And the second was fantastic play around the box.”

Asked about Livramento’s injury, Hasenhuttl said: “I cannot tell you what the diagnosis is, but it looks very, very serious.

“He’s very down the guy but we all know that he will come back even stronger.”

Brighton have not won at home since Boxing Day and had failed to score in their previous five matches in front of their own supporters.

Hasenhuttl sensed a mental fragility from the hosts, which his team duly exposed.

“We kept the pressure high on them and we knew about the history they had in their own ground where they haven’t won a lot of games this season,” he said.

“It was clear they are a little bit struggling mentally and we tried to use this fact and absolutely deserved the equaliser.”

Brighton, in 11th position, sit a point and two places above their opponents after their winless home run stretched to eight games.

Seagulls head coach Graham Potter rued letting Saints back into the contest on the stroke of half-time after Marc Cucurella’s foul on Nathan Tella allowed set-piece specialist Ward-Prowse the chance to curl home.

“I’m frustrated with the first goal for them because it was a bit of a ball from nothing and we didn’t defend it so well,” said Potter, who also saw substitute Pascal Gross have a late strike disallowed for offside.

“We give a free-kick in a place where we know James is very dangerous.

“I think that probably affected them positively and us negatively at the start of the second half.

“An entertaining game – not the best for the coaches maybe.”