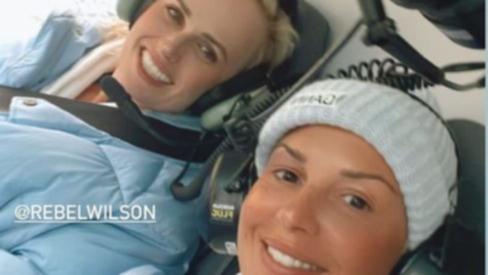 Rebel Wilson and Ramona Agruma are lapping up a lavish European holiday, two weeks after going public with their relationship.

The loved-up couple showed off snaps from their trip, which included stops in France, Italy, and Iceland.

And the pair appear to be travelling in style, with Ramona showing off a selfie of them in a helicopter “somewhere cold” in Iceland.

The lovebirds even wore matching blue puffer jackets for the trip and white fleece scarves.

“Let’s go for a swim!” Ramona captioned the pic.

The romantic display clearly had the approval of their celebrity pals, with Paris Hilton among those to gush over the couple.

“So happy for you love!” she wrote.

On Thursday, Rebel wore a beanie and wetsuit for a dip in a cold Icelandic lake.

“Midnight in Iceland,” she captioned the pic.

Just two weeks ago, the couple became the subject of a media storm after an Aussie gossip columnist apparently threatened to “out” Rebel by revealing her first same-sex relationship.

Andrew Hornery, who writes for The Sydney Morning Herald, sent questions to her about the rumoured relationship just days before she went public with the news.

In Hornery’s column, which has since been removed, he fumed at Rebel for “opting to gazump” his publication by breaking the news first.

But readers were furious at the SMH’s move, taking to Twitter to vent about its “disgraceful behaviour”.

Even Hollywood star Whoopi Goldberg laid into the journo.

“The man who did it even apologised saying it was never his intention to ‘out’ her,” she said.

“I’m sorry, if you didn’t want to do it, you shouldn’t have done it. You knew exactly what you were doing and it seems these are the only moves people have to get in front of a story before it is all over social media or every other media and there’s got to be a better way to do it, don’t you think?”

In announcing the news on Instagram, Rebel wrote how she had finally found her love match with the fashion designer.

“I thought I was searching for a Disney Prince… but maybe what I really needed all this time was a Disney Princess,” she gushed to her 11 million followers.